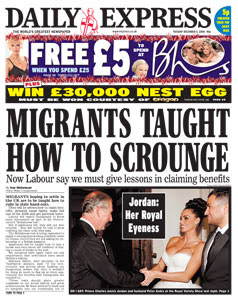 And this year's winner of the Dave Sim prize for factual writing is...

Dear lord, where to begin on probably the most hate-filled lead story the Express has produced yet.

Why is it that Blair's enemies on both Left and Right spit out "New" in "New Labour" with such venom? Newspaper headlines put a premium on terseness, yet that's an extra adjective that adds no extra information. I'm curious (as a non-Briton)- is it that critics on the the Left think the "New" is a betrayal of Old/ Traditional/ Real Labour, a sort of political New Coke, while the Rightwing critics see it as masking the avatistic Old Labour beast beneath?

Tom R., "New Labour" means something quite different from "Labour", which roughly speaking means "rather incompetent socialists". By contrast, NL is the bastard child of Blair and Mandelson, a creature of all spin and no substance. The "New" is more like the one in "Eric Burdon and the New Animals" than the one in "The new U2 album".

If asked what NL stands for, most people would be hard pressed to give an answer; the closest thing might be that it stands for that nice Mister Blair's dazzling smile. So it's not hard to see how it attracts hostility from both left and right wings.

It's true you know. I was engaged in conversation yesterday with a an immegrant granted permenant leave to remain in the UK and a young man who'd education was completed in under a New Labour government.

Neither of them knew the names of the Queens of England prior to the accession of Kings called William - it was for a crossword clue. Not one of them! OK, I couldn't remember the name of James II's Wife, but I, largely educated under a Conservative government could remember most of them.

Beyond crossword clues though, I'm buggered if I can work out why it's useful to remember that Harold II's wife was Edith Swan-Neck.

Has anyone read the comments section yet? Some truly wonderful gems on there:

"I do not think that my grandfather who died in WWI and an uncle who died in WWII fighting for a free country expected it to be this kind of 'free.'
RonR, Brentwood, UK"

"i think it's terrible. the British government throw millions of pounds at immigrants, when british people such as myself who worked for years in england contributing to the wealth of the nation are not able to receive a full British old age pension because of living in canada.
arthur, victoria, canada "

And the last one, who could probably do with some education about the way unemployment benefit works in this country herself:

"Yes we are teaching migrants to scrounge, they should be coming into the country with a trade or skill to work for a living like the rest of us have to and there should be a limit to how many can come in per year - it's not fair that we are working to support them. When my partner is out of work he cannot claim a penny because I work and yet these people are coming in and being told exactly what they can get - it is ridiculous
Julie, Sheffield"


Beyond crossword clues though, I'm buggered if I can work out why it's useful to remember that Harold II's wife was Edith Swan-Neck.

Well, it depends on your perspective -- it has been argued that she was his wife "according to the Danish custom," like Cnut's other wife, AElfgifu of Northampton. I believe their children were treated as legitimate; a daughter was married to Vladimir Monomakh. But by clerical standards, Ealdgyth was Harold's mistress. His legitimate wife was Aldgyth, sister of the earls of Mercia and Northumbria and therefore a good family connection.

So, let's see. He had a mistress named Edith, a sister named Edith, and a wife named, basically, Edith. Anglo-Saxons can get confusing.