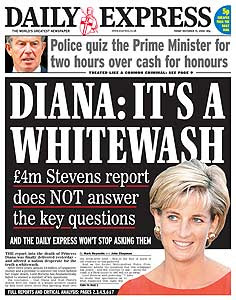 Earl Spencer said, more or less in so many words, that the tabloids killed his sister because she was Good and they were Evil. And the Common People, who can never be wrong, broke with protocol and applauded.

The tabloids never forget and they never forgive. If Our Lady of Hearts was assassinated by Prince Phillip and the New Labour Orbital Mind Control Lasers, they can turn around and tell Earl Spencer that he was wrong. If she was in an accident because she was driving too fast in order to get away from people who wanted to take a a photo of her with her new boyfriend and sell it to, say, The Daily Express then he was, in a sense, right.