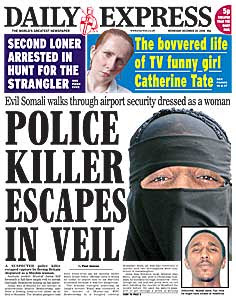 Has there actually been any evidence at all the the evil somali person dressed up as a woman wearing an evil muslim veil?

No. Based entirely on speculation by an unnamed police officer and firmly not confirmed by the police service.

It is understood West Yorkshire Police - who have not commented on reports about the veil theory - regard it only as one of a number of possibilities. http://news.bbc.co.uk/1/hi/uk/6195581.stm

A spokeswoman for the Home Office said they were treating the claim "as an allegation at the moment", but confirmed they were looking into it.http://www.guardian.co.uk/gun/Story/0,,1975759,00.html


A fake passport would seem to be more reliable and probably less fuss to arrange.

But since when did the truth make us any less at risk from evil somali people, and of course evil muslim veils? I like the insistence by the Express that everyone should be identified while leaving the country- I wait with interest for their howls of outrage as boarding times for flights are extended accordingly.

There is a fine evolution though in today's rag, where they've gone straight from 'It was suggested that the evil somali person might have escaped this way' to 'We showed yersterday that this was how he escaped'.

Actually I don't really see the need for a fake passport. They are unusally right in pointing out that there are no exit controls. The emmigration officers make sure that you have a passport, but no notes are kept. The evil somali could perfectly well have just travelled out on his own. Escpecially if he'd left via tunnel or ferry there would have been no record at all.

Bit daft really. All that would actually be needed is a scanner to read and OCR each passport and the queues shouldn't need to bloat so very much.

But I thought the Mail wanted people from {foreign country} to return to their home country?

I read recently (in the Book of General Ignorance) that the term "Magi" doesn't imply number or sex of the astrologers involved. So, I thought to myself, I could cast a Nativity play with a cast of girls as the Magi.

Amazing, isn't it, how the Daily Express headline just slips off the tongue... "NOW IT'S THE FOUR WISE WOMEN".

Ooh, brilliant one on the Daily Mail today, where recovering unpaid taxes is equated to "making us pay more". Sigh.