will try to catch up over the next few days

in the meantime here is a picture of a llama 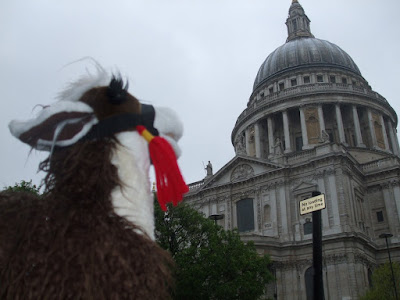 I for one have been desperate for your opinions on both Glamourpuss and Judenhass since they came out...

I on the other hand just appreciate the llama.

And I think making money so you can pay your Internet bill is worthwhile for all concerned.

Also, since it's not St. Francis' Day, can you give any background on the reason why a llama (rather than a Lama) is visiting St. Paul's?

Somebody’s got to be Andrew Rilstone

During the Christmas special that introduced Tennant in post regeneration hangover, Rose said “Somebody’s got to be
the Doctor”. This echoes partly on blogging - one of the things I used to look forward to was Andrew reviewing an
episode of Dr Who - but he’s got other stiff to discuss; and partly on the episode ‘Turn Left’ - in which a big part of the
plot is what happens in a reality without the Doctor but with his enemies.

This is probably the first time for ages that I caught myself at a number of points in an episode thinking ‘this sucks’.
Once Donna has got the time beetle much of the episode goes over to showing that without the influence of the Doctor
she remains the massively annoying, shouty, self obsessed and vaguely thick character she was in Runaway Bride. As
opposed to the mildly annoying, bolshy, with a conscience about extra’s (hello Pompeii) and has the odd good idea
character she has been in this season. Unsurprisingly my main reaction to the more annoying Donna was to find her
annoying. This part of the episode is followed by the ‘everything goes to shit without the Doctor to save us’ part. A
major problem with this is that after last season’s ending (and Andrew’s review of it) I was losing emotional investment
as it’s the “OK so London has just been nuked by the space-Titanic, that’s all right cos this is only an alternate reality”
syndrome. In both of these parts there is a lot of repetition. So in the annoying Donna part I was thinking “Come on
you’ve made this point already, now stop making it over again & get to the plot”. In the ‘one disaster after another’ part
I was thinking the same thing. Pretty much what this means is that by the end of the episode I was realising that the plot
I was waiting for may be next week and that they’d wasted 50 minutes of my Saturday to set next week up.

On further thought I figured that part of the reason they’d wasted my time was actually to do with the BBC being a
victim of the post Thatcher commercialisation of everything and the creep of business values into areas where they
aren’t appropriate. A major business value is to maximise profits without caring how you do it. Blood sweat and Dr
Who Tshirts, anybody? So the more episodes you can get for your money, in the shortest production time the better.
Hence each series has a Doctor Lite episode, allowing Tennant to do other stuff while the walk on parts get more
screentime. Last season they even did a good episode of it with ‘Blink’. Now when you think that this episode
contained a lot of recycled footage from other episodes (Raknos scene again??) and that the scene in Donna’s car at the
junction was repeated that’s one episode’s worth of programme slot for considerably less than an episode’s worth of
original footage. Which felt like being sold a shoddy product to boost profits. I didn’t check the credits but was this
one written by CMOT Dibbler? This also tags into the idea of self referencing, where apart from endlessly reminding us
of past episodes the characters from the spin-off series were namechecked. When Rose & Donna talk I’d like dialogue,
not a shopping list of the team in bloody Torchwood (the term bloody is appropriate as both a literal description and a
swearword in this context). In a world where the Beeb wasn’t forced to prostitute itself they might be less likely to
need to include veiled adverts for it’s other shows in there. Not to mention more product placement for News 24.

The spin off shows are theoretically aimed at different markets. Sarah Jane is meant to be for kids, and the appalling
Torchwood is meant to be for post 9pm sex & violence addicts. As Doctor who is aimed at a family audience not
everybody is going to get the references, nor should they need to. How many of the gags / routines only work if you’ve
watched everything and have a very retentive memory? There used to be a term for self referencing, it was called
disappearing up it’s own arsehole.

Andrew would also comment about the diversity of the show - Indian businessman, black female UNIT officer, comedy
Italian house occupants. You do start to wonder if Dr Who is trying to get a grant from the Heritage Lottery Fund? If so
they need a wheelchair user, because although they aren’t the majority of disabled people they are the most high profile.
And no Davros would not count as a wheelchair user. To be demographically accurate you’d include deaf or blind
people as there are more of them.

One problem with the ‘no Doctor equals disasters’ theme is that it subverts a basic subtext of the horror genre, which is
that however scary the monsters are, in the genre humans always find a way to defeat them. This can be seen as
humanist, freewill oriented and encouraging people to try hard in whatever adversity they face. The plot here pretty
much says without the Doctor humans are in deep trouble. Next thing we’ll be building temples to him and
genuflecting. Hold on, the saved extras from Pompeii did make a shrine. This worldview is also reflected in the idea
that the Doctor makes the companion overachieve. I thought one facet of a companion was to say “look, ordinary people
can be heroes too”. Currently we’re being told that it’s being in the presence of the Doctor’s divine grace that brings
out the best in Rose & Donna. Frankly I preferred Mickey’s “I’m a metal dog?” moment.

It is our darkest hour, and he is nowhere to be found...

No not him, I mean Rilstone! I came on this blog trying to find out if I should bother watching the Grand Finale tonight. Will it be poetry, or will it be more of a Frank Spencer Vesuvius? Sadly there are no clues. I barely have time to watch last week's episode on Catch Up before 15 million tea kettles switch on and the country goes dark.

What's the use of you, Andrew? - I'm going to have to rely on my own judgement! Like humanity without the Doctor, it's sure to be a humiliating disaster for all concerned. Still it'll be worth it just to watch that nauseating little twat get Exterminated. :)