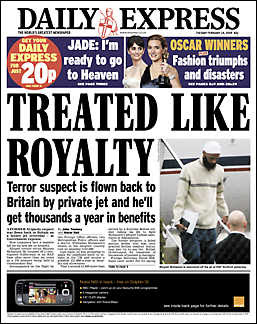 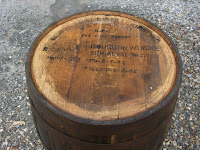 I can't see what the second picture is of. (Although I can guess.)

Maybe they mean "like royalty" in the Charles 1st sense of the word...

That's one of the very few times I've hoped for an afterlife, so the people responsible for that get the eternity of suffering they deserve.

Is the second picture the bottom of a barrel that has been scraped, or what? I'm afraid that unlike Rich, I'm unable to guess.

Perhaps it is a barrel of fish?
Where's the rifle?

I know, I know! This is an extremely heavy block of wood that is put on people's heads for purposes of torture. It is known in Guantanamo as "the crown".

Hm, "Suspect".
Suppose we will not see "innocent victim of neo-imperialism treated like Royalty" Express headline any time soon.

"These headlines are so stupid it's like we've got them over a barrel now?"

Hounded, treated like shit, accused of murdering their ex-wife?

Not quite sure why you say you're unable to guess Jacob, when you've hit on a quite plausible theory.