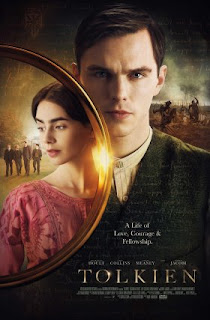 The horror of the First World War.

Survivors, in the days after the war, nursing injuries and remembering fallen comrades.

We've seen it. Over and over. And yes of course it bears repeating.

But what does this particular First World War film have to say about the particular Tommy who would grow up to create Middle-earth?


Tolkien had a boring life. Which is to say, he had the best possible life any writer could possibly have: he stayed at home and wrote. After 1918, says Humphrey Carpenter, nothing much happened. He taught undergraduates about Anglo-Saxon vowels and was the first person to spot that Beowulf is a good story. He drank beer with C.S Lewis and entirely missed the point of the Narnia stories. And he wrote some books which were in his lifetime modestly popular but attracted a cult following. He never finished his Great Work, but that's because his Great Work was pretty much un-finishable.

Compare and contrast with the life of his friend C.S. Lewis who kept getting himself into the most complicated and dramatic psychological scrapes. The story of his life is in grave danger of becoming more famous than his actual books.

Priscilla and Christopher Tolkien are both alive although approaching their one hundredth birthdays, and they have very sensibly deemed that their father's personal papers -- those not related to Middle-earth -- are not to be published in their life-times. I don't think that there are any Dark Secrets waiting to be revealed, but clearly sometime in the next decade it is going to be possible to publish a much more detailed and intimate biography of Tolkien than has been possible up to now.

In the mean time, there is this. It is hard to say much more than "Son; you are no Shadowlands."

Any Tolkien bio-pic was always going to fall into a fairly predictable shape, based on two inescapable biographical facts. In his rambling introduction to Lord of the Rings, Tolkien complains that everyone assumes that the story was inspired by the 1939-45 war, even though the Great War was a more significant event in his own life. And then he suddenly blurts out "By 1918, all but one of my close friends were dead." And in Wolvercote cemetery in Oxford, anyone can find a grave bearing the real names John Ronald Reul Tolkien and Edith Mary Tolkien, along side the fictional names Beren and Luthien.

So there is your story. While he was at school, Tolkien used to go and drink tea and eat cake with three other young men, and talk about the novels, poems and music they were going to write. They jokingly called it the Tea Club and Barovian Society. (Their tea shop was in a department store called Barrows.) As they got older and moved apart, they started to mythologise the TCBS. It is hard to know if Geoffrey Smith would really have been a great poet and Robert Gilson would really have been a great artist if they had survived the Great War. You would hardly have known from his juvenilia that young John Ronald was going to write the Best Loved Book of the Twentieth Century. Young people always think that their friendships are the greatest and most important friendships that there have ever been, just as they always feel that no-one before them has ever been truly in love.

People of Tolkien's age and class seem to have been more than usually prone to carry childhood jokes and nicknames into middle-age. C.S Lewis's letters to his brother are dense with private jokes about piggiebothams and pdaddybirds. I wonder if this is a product of the public school ethos which teaches that you are an Etonian or a Harrovian first and everything else a very poor second. Nothing of any real importance happens after you are done with Hogwarts.

Geoffrey and Robert died in the trenches, and the fourth member of the group, Christopher Wiseman, gave up his ambitions to be a classical composer. Before he died, Geoffrey Smith wrote a letter asking Tolkien to "say the things I have tried to say long after I am not there to say them."

So there is one half of the story: four young men set out to change the world through their art. Two die; one comes home damaged and never fulfills his dreams; but the last makes good on the promise and really does change the world.

When he was only sixteen, Tolkien fell in love with a slightly older teenager named Edith Bratt. He was a catholic and she was a protestant and his legal guardian, a Jesuit, told him to stop seeing her or lose his inheritance and any chance of going up to Oxford. He wrote an proposed to her when he became a legal adult on his twenty first birthday. The whole thing sounds so much like an operetta that we should be relieved he wasn't born on the twenty ninth of February. They got married and lived happily ever after, for certain values of "happy". The story of Beren (who can't marry Luthien unless and until he steals one of the holy Silmarils from the Crown of Morgoth) and Aragorn (who can't marry Arwen unless and until he becomes king of the reunited kingdoms of Gondor and Arnor) are to some extent inspired by Tolkien's own circuitous love story.

And it is at this point that the film collides with a very large and very immovable object. The basic facts of Tolkien's life are in the public domain. His stories and poems are very much protected by the Berne convention. So we are faced with a film about the origins of Middle-earth which cannot quote from any Middle-earth related story and which is barely permitted to actually use the term Middle-earth. At one point we see Tolkien looking at the nigh sky and muttering a verse about "bright Earendel", but no-one gets around to telling the, actually rather fascinating, story about how the Anglo-Saxon name for the planet Venus got incorporated into Tolkien's private mythology as the name of Elrond's legendary father. Although we see Edith dancing in some woods by moonlight, we can't be told directly that this is awfully like the moment when human superhero Beren meets elvish demi-goddess Luthien. Similarly, when the sick JRRT is blundering around the trenches in the company of his loyal batman, we are left to draw our own conclusions from the fact that the batman's first name is, er, Sam.

It is beautifully filmed and impeccably acted -- there is even a funny turn by Dear Dear Sir Derek as Tolkien's tutor Prof Wright. It takes place in that movie version of the Olden Days where the sun always comes through the trees at exactly the right angle and everyone's motor car is shiny and new.

But it is probably the silliest film you will see all year. Ludicrous, overwrought scenes tumble off the screen. The script is a dead cert for the "Most Bio-Pic Cliches In a Single Movie" Oscar. The high production values and decent cast make the unintentional comedy seem even funnier.

It is hard to select a favorite moment. Perhaps it is Tolkien's departure for The Front. He and Edith say goodbye in a restrained, stiff upper lip kind of way, and he marches off….and then suddenly turns around, runs back, puts his tongue down her throat and proclaims undying love. ("Stay alive!" she suggests, not entirely constructively.) One wonders why they didn't just play Rachmaninov in the background and have done with it.

FACT: Tolkien and Edith were already married when Tolkien left for France.

Or is it the scene when Tolkien, having been sent down from Oxford for failing his exams and holding a rather drunk TCBS meeting on a bus, receives a letter to the effect that his True Love is Betrothed To Another and starts proclaiming Elvish poetry to the heavens, waking up everyone in college. But -- how ironic! -- Prof Wright is one of those he wakes up, and he wants to know what language Tolkien was speaking. Tolkien follows the old man around Cambridge for some time until he agrees to let him join the philology department. On condition he writes a 5,000 word essay on Norse Survivals in Gawain. That afternoon.

FACT: Tolkien started out studying Classics, but did disappointingly in his first year exams. He was allowed to switch to English because he had scored 100% on his philology paper.

I adore the scene in which the relatively uneducated Edith puts brilliant Tollers to rights on the True Nature of Language. He only cares about the sounds of words, and goes off on one about why Cellar Door is the most beautiful sound combination in English. She shares with him the original insight that the beauty of language consists in both sounds and meanings. This gives him the idea of creating imaginary people to speak his imaginary languages. So it's all her fault.

Another moment of comic genius occurs when Edith has a falling out with Tolkien. Tolkien takes her to meet his tea shop friends, but becomes jealous because she shares an interest in Wagner with Christopher Wiseman. Tolkien doesn't particularly like Wagner. "It shouldn't take six hours to tell a story about a magic ring" says Gilson, at which point several members of the audience cut their own throats in desperation. To make it up to her, Tolkien takes her to hear Rhinegold at the Birmingham opera. Only they don't have tickets and aren't dressed for the opera and can't get in. So, and you'll like this, they climb over a wall and sneak into a costume store from which they can over hear the music...and dress up in the costumes and mime the story as the music plays.

FACT: Edith never attended a TCBS meeting: Tolkien's friends didn't know about her until after they were at college.

But the greatest moment; the moment which will live in cinematic infamy, comes in the final seconds. It is just the most perfect mixture of historical inaccuracy and cliche you ever saw in your life. Some years after the war, Tolkien is sad because he doesn't know where his Great Work is going. Edith counsels him to decide what he really wants to write and write that or to write what he knows or something of that sort. Out for a walk in the Shire with their children, Tolkien starts to promise a new story, which the kids will help him with -- and which, he promises, will be about love, loyalty, quests, dragons, small people who are big on the inside, skateboarding elves....

Alone in his study, we see him take a beautiful clean sheet of manuscript paper. We see an extreme close up of a fountain pen nib. We see the pen dipped in ink. We see it start to write on the pristine page, in beautiful hand writing.

And then bugger me if he doesn't stop and think and we go into extreme close up on his lips and hear him whisper the word "hobbit" just before the screen blacks out.

FACT: Tolkien wrote "in a hole in the ground there lived a hobbit" on the back of an old exam paper on the spur of the moment. He didn't at that point know what the story was about, and had no idea that it would eventually connect with his long germinating mythology.

There may come a day when someone will make a worthwhile movie about the life of Tolkien. But it is not this day.

I'm Andrew. I write about folk music, God, comic books, Star Wars and Jeremy Corbyn.
If you are enjoying my essays, please buy me a "coffee" (by dropping £3 in the tip jar)
Or consider supporting me on Patreon (by pledging $1 for each essay)