Words
Words is all
In the underground
and ticket halls
Declaring peace
Wall to wall
Back in Leeds
The news we heard
No one killed
No one hurt
Wish all the young men
Used only words
*
The aforementioned Martin Simpson is the next tenant at the folkhouse on Easter Saturday. He's more or less bound to sing "Never Any Good" and "One Day" which are two of the best songs written since, well, ever, and his guitar makes sounds that you didn't know a guitar was able to make. There appear to be tickets.
*
I realize you're all getting tired of positive reviews. I promise to find something to eviscerate before too long.
2 comments:

Email ThisBlogThis!Share to TwitterShare to FacebookShare to Pinterest
Hmmm....
3 comments:

"You cannot hope to bribe or twist (thank god) the British journalist...." 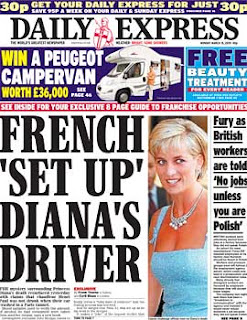 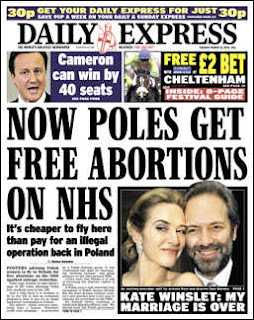 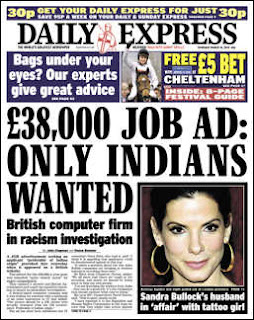 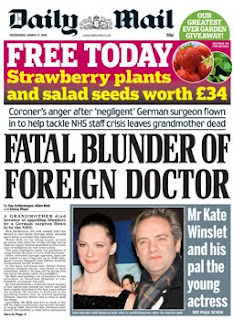 "...though, seeing what the man will do unbribed, there's no occassion to."
3 comments:

Ashley Hutchings and Ken Nicol
Redgrave Theatre, Bristol
Feb 26th
Friday came down to a straight choice: Ashley Hutchings at the Redgrave, or Steve "Fifty per cent of Show of Hands" Knightly at Colston Hall. Apparently, everybody else picked Steve Knightly. You know things aren't too good when the usher asks if you wouldn't mind sitting near the front.
Ashley Hutchings is one of the founders of the aforementioned Fairport Convention; Ken Nicol performs with Steeleye Span, so together they account for both the folk groups I had heard of before I started listening to folk groups. (They've also been in the Albion Band, but then so has everyone else.) I know Mr Hutchings primarily as a producer and arranger of traditional music, particularly the Morris On series. (Black Joke from the Mother of All Morris album would almost certainly appear on my list of all time top ten folkie tracks (*)) Tonight, the focus is on their own, self-written music. There is, of course, a new album.
The pair don't seem phased by the relatively poor turnout. Much of the evening has a light, even zany atmosphere. Ken tells a long, punchline-free anecdote about meeting a professional regurgitator while queuing for an American visa. Ashley speaks of his enthusiasm for ten pin bowling, and then sings a song in which he imagines Francis Drake refusing to go up against the Spanish Armada until he's finished his coke and hotdog. There's a ragtime (it says here) number in which the birds and the bees ask the groundsman to leave some wild space for them on the cricket pitch (please make this corner a short boundary / for the sake of good grave, that's W.G) and a surprisingly sombre one about apprentices being sent to fetch stripy ink and buttonholes on April Fools Day.
But it's also quite literary. Before Ken plays a traditional Irish hornpipe ("written by me, in Preston") Ashley recites from memory a long passage about clog dancing from Arnold Bennet; a song about the Ponte Vecchio is introduced with some lines reminding us what Wordsworth felt about Westminster Bridge.

The absolute stand out number is the reworking of Gypsy Davy in which the lady declines to go away with the raggle taggle gypsy but instead remains in her fine house -- but with just the slightest hint that she's going to regret it afterwards.
They look old, slightly weather-beaten, even dishevelled; as if they've been together for so long that making music no longer takes much effort. The evening opened with a haunting psychy piece called Prologue and ends with an identical song, this time called Epilogue. The temptation to draw Samuel Beckett analogies is overwhelming.
A funny, mellow, melodious evening. But I do start to think that 60s style folk rock may not really be my thing.
[*] Assuming that the Bible and Shakespeare are already there:
10: Birth of Robin Hood (Spiers and Boden)
9: Black Joke (Jim Moray / Ashley Hutchings)
8: King of Rome (June Tabor)
7: Muir and the Master Builder (Dick Gaughan)
6: Roots (Show of Hands)
5: World Turned Upside Down (Billy Bragg)
4: Little Pot Stove (Nic Jones)
3: Sovay (Martin Carthy)
2: Passing Through (Peter Seeger)
1: Grand Coulee Dam (Woody Guthrie)

Any attempt at objectivity must now go out of the window.

Since hearing Chris Wood for the first time at the Hatfield mini-festival last July, I have become quite evangelical about this performer. Given that his most famous song is an ode to atheism, this is perhaps a little ironic.

Or perhaps not. Wood says that he is a little uneasy about Richard Dawkins' endorsement of his "atheist spiritual", Come Down Jehovah. On the other hand he's rather pleased to hear about a choir-master who wants to re-arrange the song and perform it in church. "I don't have any more problem with Richard Dawkins than I do with any other fundamentalist," explains Wood. He doesn't like anyone who thinks they've arrived at absolute truth. He is the kind of atheist who counts English hymn-writer Sydney Carter as one of his heroes. Before Jehovah, he leads the audience in a rousing chorus of one of Carter's carols. (I'll crow like a cock, I'll carol like a lark / In the light that is coming in the morning!) [*]

While I've greatly enjoyed his performances with the Imagined Village and the Handmade Life group, tonight's intimate performance – just the singer and an acoustic guitar – seems to me to be the Real Thing. He tells us that Cold, Hard Windy Night was taught to him by Martin Carthy, and you can hear it in every line.

I don't think any of the recordings capture the impact of Wood's stage act. For one thing, he talks a lot. He comes onto the stage pretty much as soon as the support act has left ("we don't want to be precious about this") and immediately starts moaning that the sound team have put on a random music CD in the gap between the performers. "You wouldn't go to Stratford and expect them to be playing fucking Alan Bennet on the way in..." His songs are lyrically dense and complex so in some cases they benefit from his explication. It may not be immediately obvious that Spitfires is a response to Nick Griffin's Euro-election leaflets; or that No Honey Tongued Sonnet is partly about the 11+ exam or exactly what it means to "watch the spuds chitting".

If you only know Come Down Jehovah from the version with Kathrine Polwart on Trespasser, you might be surprised by the humour which he brings to the song live: the way he looks up and pauses for a second before singing "my neck is terribly...stiff"; or the dripping sarcasm he brings to the Cottager's Reply ("this Cotswalds house that you call...nice...")

He has a bit of a reputation for being relentlessly downbeat, but in fact, there's quite a range of tones and styles. My Darling's Downsized – a song about love and gardening in which every line is  funny but every sentiment entirely sincere – may perhaps invoke the very English ghost of Jake Thackray. There's perhaps a hint of Steve Tilston in Spitfires and a smattering of Billy Bragg in the more ranty political ones. (There's no more mandate for you soiled institution / we're all praying here for divine retribution / don't you go asking for another contribution. If Chris chooses to cast a satire about the MPs' expenses scandal in the form of a riff on Ballad of a Thin Man then who are we to ask why?)

If he has a chink in his lyrical armour, it's slightly tendency to the sentimental, even the corny. (Louise observed that, like all cynics, he's a romantic at heart.) So three accutely observed vignettes about his six year old daughter lead to the not very profound observation that when she's with me / I get much more than I'm giving. It's notable that when Martin Simpson sings Come Down Jehovah, he omits the last couplet (if we've done our best / we'll be ready for a rest) to the over all improvement of the song.

I hadn't heard the epic One in a Million before, although I'm told it was the best new folk-song of 2006. The lyrics (by an oral storyteller named Hugh Lupton) are like a modern Chaucer: they start with a realistic setting (a fish and chip shop) populated by absolutely naturalistic portraits of "stock" characters and only gradually allow you to realize what you are listening to is, in fact, a fairy tale. The melody creeps up behind you: in verse one, I might almost have said "this is pretty much a recitation; the words, not the tune, are doing the work" but on each repetition the actually quite jaunty verse and the almost dirge like refrain works their way into your head. It's a long, long, song – he's a demanding performer and you have to pay attention right the way through to see where he's going with his stuff. In the end it's the way the character's voices (speaking, as the fellow said, "the very language of men") merge naturally with the persistent melody that makes the song so heartbreaking. (She said Billy love I'm sorry / I never meant no harm /Oh you're kindly and you're comforting /And I love it when you sing / But in all the years I've known you/You never said a thing.)

I've bought all his CDs, but I haven't been able to listen to them. Not right through. The songs are too...intense? The chilling Hollow Point remains the only piece of music (the only piece of music which doesn't involve warrior maidens setting fire to themselves) which makes me cry ever time I hear it. I think that it was written with the Handmade Life band in mind, and a great deal of the song's power comes from the threatening instrumental heartbeat which gets louder and louder as through the hourglass the sand is falling / and there is nothing he can do. It's impressive that Wood can achieve the same effect on stage with his guitar alone. When I've heard something like that on my I-Pod I don't want  to -- I can't -- just go on and listen to the next track. I'm left feeling, as the other fellow said "that I need a brisk walk round the block, possibly pausing at a bar on the way back for a quick glass of perspective and soda."

He really is that good.
[*] My enemy's enemy is my friend, of course; but it's a little hard to see why someone who regards God as a perverted genocidal monster would be enthusiastic about a song which portrays him merely as a rather beautiful illusion. A goodly number of Christians would be quite comfortable with the line "Heaven is right here on earth, Jehovah: not tomorrow but right now today." (Wasn't that the burden of Honest to God?) And yes, as a matter of fact, I do know the difference between fundementalism and evidence based thingamijig.