The Bringer of War

2 comments:
Email ThisBlogThis!Share to TwitterShare to FacebookShare to Pinterest 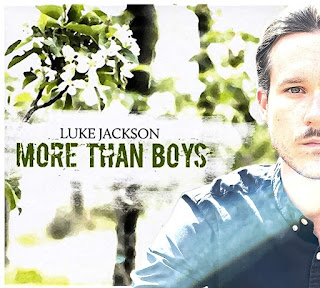 A child climbs trees with his two best friends and wonders what they will do when they grow up. A boy plays football with his four best friends and looks forward to the day when he'll score the winning goal. A teenager thinks about leaving home for the first time. Six young men go fishing and proclaim to the world that they aren't children any longer.

Collections of poems and songs sometimes have unintended unity. Luke Jackson says that he was puzzled back in 2012 when people called More Than Boys a "coming of age" or "growing up" album: he thought he was writing songs about what mattered to him at the time he wrote them. And yet the album had a profound thematic integrity.

There was a strong sense of perspective: it's a young man remembering being a child looking forward to the future; a father playing football with his son remembering when he used to kick a ball with his mates. The teenager getting ready to leave home imagines what it will be like when he has kids of his own. In the astonishing Kitchener Road, the singer dreams of going back to a home he's moved away from, knowing he never will. "We talked about what the future would hold, but that's all memories." Looking back at looking forward: that could stand as an epigram for the album. Seeing the future in the past. The album may not be about growing up, but it is certainly about Time. It may not be a coincidence that Luke's most recent album included a cover of a very well-known Sandy Denny number.

This is the second time I have reviewed this album. When it first came out, in 2012, I remarked that most pop songs about childhood are written by men in their twenties and thirties, through the rosey haze of nostalgia, and that it was remarkable to hear "It feels that all my childhood songs have been sung" from someone who was still a teenager. He mentions building hideouts in the woods -- what wholesome lives these millennials lead! -- and wonders if they are still standing. When he wrote the song, it might very well have been.

But ten years have passed. No longer a closely guarded folk-secret, Luke Jackson has shared stages with Fairport and Marillion and he is opening for his hero Richard Thompson. And now he's gone back and re-recorded that first album. Which adds a further wrinkle to the perspective. When he sings Baker's Woods --- the song about climbing trees with his "two allies" -- we're listening to today-Luke looking back at teenage-Luke looking back at child-Luke looking forward...

It's a risk. More Than Boys was one of those records that captures a particular moment in time -- where the circumstances of its existence is part of its meaning. Luke is no longer an inexperienced singer with a satchel full of great songs; he's a professional troubadour with a half a dozen decent albums under his belt and a show-stopping set-finisher about life on the road. I think that some of us were probably quite patronising when he first blasted onto the folk scene, but there is a certain naivety to the original album. Will a mature voice spoil that cusp-of-adolescence vulnerability?

But the songs stand up as songs. Maybe here and there is a rhyme that today-Luke would not have indulged in. (I'm not quite convinced by "fake" and "wake" and "all your wrong intentions.../all your miscomprehensions.") And I'm still puzzled about why the birds were singing a lullaby first thing in the morning. But the songs' emotional directness -- what I once described as their heart-breaking quality -- still shines through. His voice has got a touch more resonant, and his guitar playing, naturally, is more sophisticated. And the delivery is much more nuanced: he moves from melodic folk singing, to letting rip with his remarkable vocal cords, to speaking and even whispering, in the same song, sometimes in the same line. But they are still the same songs they always were and it is still the same album: I sometimes had to listen quite carefully to see what he had done with the old material.

The Last Train (about a soldier returning home to break bad news to a comrade's family) has acquired a more complex guitar riff, as well as a few bars of Dylan as a coda -- but its the whispered final line "until all that was left...was hope" which raises the emotional pitch. Two thirds of the way through Run and Hide Luke is rocking out, but he pulls it right back for the repeat of "you can't run and...hide." On the original record he seems to (if I can put it like that) just sing; but here he seems to tentatively engage with the material, like an actor trying to work out what the words could mean. "Reality is more fake until you fall...fall...fall...asleep" he sings, with each "fall" carrying a different nuance.

The first half of Winning Goal is a jingly jangly sing-along; but he drops the guitar and sings unaccompanied in the second half, when the boy footballer realises his dreams are never going to come true. ("These days he works, he slaves hard, he tries, he never played for the winning side.") The song used to end with the grown up saying to his son "Oh my boy; one day you'll score the winning goal": it now ends "Oh my boy, you're my winning goal", which ties the whole thing together beautifully. Speaking as one with a profound dislike of football, I have always had a soft spot for this song, and the new version is one of the strongest things on the album. I don't think it has ever made its way into a live set, and it really deserves to.

There are a few other places where a lyric has mutated slightly: whether as a conscious improvement, or just because Luke is still a bit of a folkie at heart and words change the tenth or hundredth time you sing them. He used to sing that he would give anything to go climbing trees with his childhood friends: he's now added a deeply felt everything. He used to say that he wanted his fathers pride in the man he hoped to become; now he talks about the man he's sure to become. Most intriguingly, the opening lines of Kitchener Road have changed from "I hope you're glad -- this is all your fault" to "Don't be sad -- this is no one's fault" which rightly takes the bitterness out of an elegiac song; allowing it to stand as a universal home-sickness piece.

Luke's signature song, More Than Boys, was always poised between the carefree chorus ("me oh my, where's our worry") and a sense of the poignant nostalgia -- the day's fishing is coming to an end, and so are the years when you don't have to worry about where the time goes. On stage, the song has sometimes become very slow and meditative indeed, but this version takes it a shade quicker than the original, allowing the fun and joy to dominate, with just a shade of wistful sorrow coming through in the final chorus. I think this is the way it should be: a happy-sad song, not a sad-happy one. The title track of a happy-sad album.

I love this album. It's not a deconstruction or re-invention of the 2012 version: it's simply older-Luke singing younger-Luke's songs in the way he would sing them now. As it says on the cover: More Than Boys Revisited. These are songs which are eminently worth revisiting.

My review of the original version of the album

The new version of More Than Boys is available on Bandcamp from Friday.