A Sherlockian Solution To A Watsonian Problem

In the earliest issues of Spider-Man, Peter Parker is romantically interested in his classmate Liz Allen, who is nominally going steady with nasty sports Jock Flash Thompson. He then develops a more serious relationship with J. Jonah Jameson's P.A Betty Brant. But that relationship is doomed because he can't tell her he is Spider-Man. When he starts college, after a fairly rocky start he ends up in love with the boringly perfect Gwen Stacy. This is heading for wedding bells right up to the point when she is murdered by the Green Goblin, ostensibly without Stan Lee's permission. So Parker ends up in a long-term relationship with Mary Jane Watson. They eventually get married in 1987. 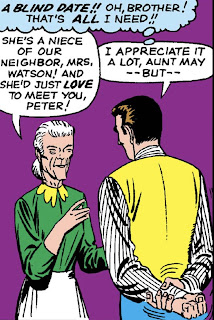 Mary Jane was originally introduced into the story as a running joke. Peter is dating Betty; Betty thinks Peter is still dating Liz; but Peter Parker's doting Aunt May wants to set him up with Mary Jane, the niece of one of her neighbours. Peter chauvinistically assumes that anyone May approves of will be plain and boring; but somehow lacks the moral courage to tell his Aunt that he is going steady with Betty and is too much of a gentleman to two-time her. 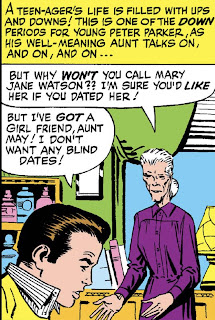 In issue 25, matters come to a Wodehosian climax. Betty and Liz turn up at Aunt May's house at the same time, and, just when they are about to scratch each other's eyes out, find that Mary Jane is already there, waiting for Peter. She is, of course, incredibly glamorous. "He's been hiding her from us! Our shy, bashful Peter!" (Her face is concealed from the reader by means of a convenient pot-plant.) 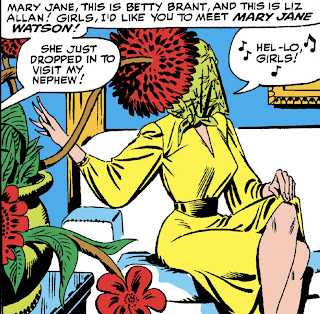 Artist/plotter Steve Ditko quits on issues 38, and Stan Lee spends three issues culling all the unresolved plot threads. Betty Brant comes home, not having eloped after all; Peter and love rival Ned shake hands and agree to behave like gentleman; bastard Harry Osborn turns out to be quite nice after all; and we finally find out who the Green Goblin is. In issue 41, Peter Parker finally agrees to long postponed date, and one month later a gorgeous red-headed bombshell bounds in with the words "Face it tiger, you just hit the jackpot." 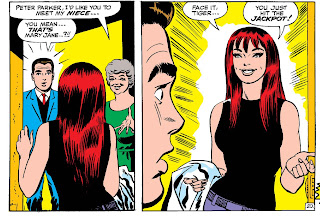 (Note: it therefore follows that the question to the answer to life, the universe and everything is : "In which issue of Spider-Man did Peter Parker first meet Mary Jane?)
As often happens in early Spider-Man, M.J grows in significance over a number of issues. When Stan gave J.J.J a glamorous P.A, probably didn't know that she was going to become Peter's first love interest. Indeed it is doubtful if, when he introduced nasty tabloid mogol J.J.J in issue 1 he knew that he was going to become Peter's major antagonist. In issue 15, May asks Peter to go meet "a lovely girl" who is the niece of "our neighbour, Mrs Watson". In issue 16 the lovely girl is named as "Mary Jane" and Mrs Watson is "such a good friend of mine." In issue 18, the neighbour helps to take care of Aunt May when she is sick. 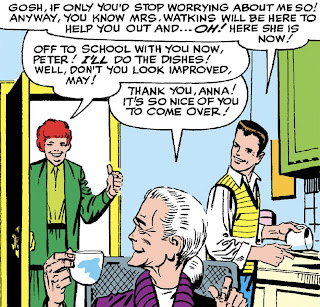 In issue 27, May looks forward to visiting Mrs Watson once a week; in 29 they go to the movies together; in 34 May drops round to her house for tea and cookies; and in 40 she considers becoming Mrs Watson's lodger. Mrs Watson is first named as Anna in issue 18 and as Anna May in issue 41 she's "a nieghbour" in issue 15 and "my next door neighbour" in issue 25. Mary Jane is referenced in issue 15, 16, 17 and 25, and not again until 38.
Now, although Peter lives with his Aunt, you would not normally expect elderly ladies to have their nieces living with them. "My niece Mary Jane" would probably refer to "my sister's daughter who lives in another part of town." But Stan Lee appears to understand that Mary and Anna have a similar relationship to that of Peter and May. In issue 18 Mrs Watson has to leave early because her niece is out of town. 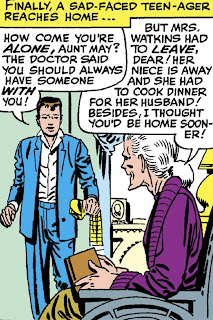 In issue 28 she looks forward to going home and telling Mary Jane about Peter's graduation. 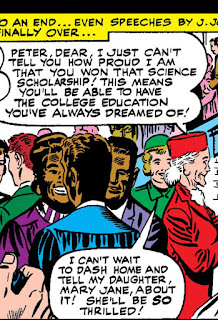 In issue 39, when May is worried about Peter, Anna remarks that even M.J is late home occasionally. 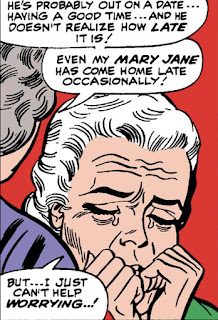 Mrs Watson is said to have a husband in issue 18: but she seems to live alone by issue 40 -- it would make sense for a single widow to ask a close friend to become her lodger, but it would be odd for a married woman to do so. 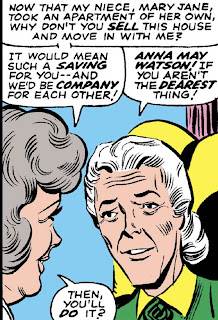 We do have to face one major inconsistency. The married neighbour who helps May when she is sick is actually referred to as Anna Watkins; and the Anna Watson who attends Peter's graduation refers to Mary Jane as her daughter. A strictly literal approach to the text would therefore require us to create two additional characters.
1: Mrs Watson-1, a widowed lady who lives next door to Aunt May and has a daughter named Mary Jane.
2: Mrs Watson-2, sister of Aunt May's neighbour, who has a daughter, also called Mary Jane. It would be unusual but by no means impossible, for two cousins to have the same name.
3: Mrs Watkins, a different neighbour of Aunt May, who is married, with an unnamed niece.
However, for the sake of our sanity, I am going to assume that Mrs Watkins, and the reference to Mrs Watson's daughter, are simply lettering errors. If we don't allow Artie Simek to occasionally make a mistake, we would have to come up with an explanation of why Peter Parker spends an afternoon living under the name of Palmer!
So: the problem we are faced with is this -- how can Peter be having a blind date with his next door neighbour? How can he not know what she looks like if she is literally the girl next door.
And of course, the answer is staring us in the face: it covers all the facts and solves another continuity problem.
In Spider-Man 1, May Parker is living in a rented home -- a landlord is going to turn her out if Peter doesn't come up with the rent. 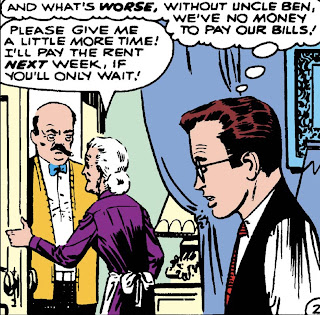 However, in Spider-Man 13, they are worried about paying the mortgage; and in issue 39 May briefly considers selling her home and becoming Mrs Watson's lodger. 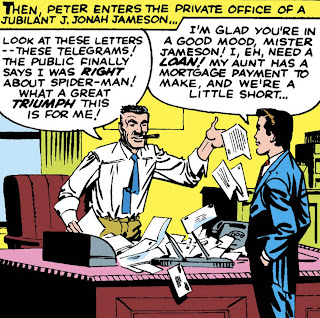 So, clearly, at some point in the first year of Spider-Man's existence, Peter and Aunt May moved to a new home. J. Jonah Jameson does not pay Peter Parker what his pictures are truly worth, but Peter can still command quite high fees, up to $250 a picture. His first cheque (for photos of the Vulture) is enough to pay a year's rent and have some left over. It is therefore extremely feasible that Parker would be able to put down a deposit on a property, enabling Aunt May to spend the rent money on repayments. (The mortgage must be in Peter's name, because no-one would give a mortgage to an elderly pensioner!)
In issue 10, Aunt May's neighbours are the Abbots: Mrs Watson is first mentioned in issue 15: so the house move must occur between issue 11 and 14. The years' rent paid up front in issue 2 would have run out around issue 13. Peter Parker does not change schools, and he is already said to be living in Forest Hills in issues 7 and 8. Presumably, then, they move a small distance, perhaps to a smaller property, and one that is very near Peter's school. 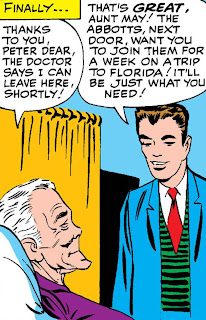 It follows that when Aunt May starts to set Peter Parker up with Mary Jane, they have only been neighbours for two months. It very much fits Aunt May's character that she would quickly strike up a close relationship; with her next door neighbour and be treating her in a matter of weeks as an old friend. It is equally in character for Peter Parker to have been living in a new location for over a year without talking to anyone else on the street.
It isn't clear exactly when MJ moves out of her Aunt's house: she seems to be living some distance away by issue 25; travels to May's house by car in 38, and is specifically said to have her own apartment by issue 40.
Clearly, then, Mary Jane, as originally conceived, was literally, but not figuratively, the girl next door. Peter Parker has recently moved to a new home: Aunt May is badgering him to start dating local girls but Peter is remaining a loner.
This also goes someway to explaining why Peter, despite his extravagant payments from J.J.J is always short of money: he has, on Aunt May's behalf, taken on a mortgage which is rather beyond his means. (Although he is still able to drop a couple of grand on a motorbike in issue 41.)
Read my book about Stan and Steve
Give me some money to say thank you.
13 comments:

“I have three things I'd like to say today. First, while you were sleeping last night, 30,000 kids died of starvation or diseases related to malnutrition. Second, most of you don't give a shit. What's worse is that you're more upset with the fact that I said shit than the fact that 30,000 kids died last night.”
Tony Campolo
Behind much discussion…there hover two propositions that I think much less admissible than the new morality
1: That if a book is literature it cannot corrupt. But there is no evidence for this, and some against it…
2: That if a book is a great work of art it does not matter if it corrupts or not, because art matters more than behaviour. In other words art matters more than life; comment on life, the mirroring of life, matters more than life itself. This sounds very like nonsense
C.S Lewis
Read more »
476 comments: 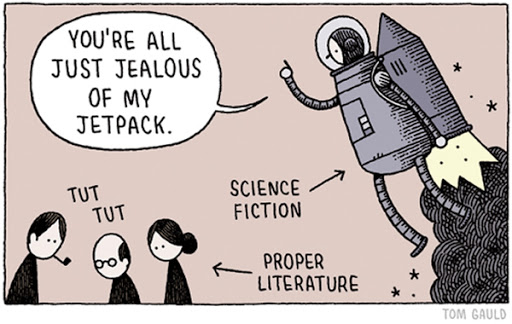