Oh dear. I just thought that there was something rather cute about discovering Daily Mail readers unselfconsciously drooling about corporal punishment. It would have been a bit like coming down to breakfast and finding a man in open-topped footwear ordering a plate of Alpen and a copy of the Guardian -- particularly if he himself didn't see the joke. I'm sorry if anyone got the impression that I had mistaken what was going on for an actual argument.

I suppose one could bash out a decent thousand words around 'This house believes that inflicting pain in the short term is no less humane than removing liberty in the long term.' We might wonder out loud whether society could have developed in such a way that traffic wardens issued tickets requiring the owners of badly parked cars to report to the police station and be beaten-up and where everyone thought that 'fines' were a bizarre idea. We might note rhetorically that in the early 1980s we decided that blowing teenager's limbs off on the Falkland Islands was the kind of violence we could happily put up with; but whacking their backsides on the Isle of Man wasn't. Before long someone would be saying 'Of course, there is no crime whatsoever in Malaysia' and 'I'd sooner have the slipper than detention any day' and I'd be forced to give them a clip-round-the-ear.

The flogging of criminals officially ended in England and Wales in 1948; in practice, it mostly went away after the Cadogan committee recommended it's abolition ten years earlier. Perhaps surprisingly, it had been abolished in the armed forces in the 19th century; even more surprisingly it hung around as a possible punishment for misbehaving prison inmates into the 1960s. But even in the 30s, it seems to have been primarily juveniles who were subjected to it; perhaps because the courts were inclined to regard them as naughty schoolboys rather than criminals. There was an attempt to reintroduce flogging in 1961, mainly remarkable because it was the only occasion when Mrs. Thatcher, who supported the idea, voted against the Conservative Party, who opposed it. Please note that I just resisted the temptation to use the phrase 'Conservative Party Whip.'

You really have to go back to the nineteenth century, if not the eighteenth, to find the lost Eden in which whipping was the normal punishment for criminals; or else look at liberal dystopias like Apartheid South Africa or modern day Singapore. The Mail readers who miss the good-old flogging days would be just as likely to lament a medieval Olden Times when we used to put shoplifters in the stocks. Before it was discovered that all dark-skinned people were terrorists, it was common enough to be told that those Arab-johnnies have got the right idea about chopping off the hands of thieves.

It is therefore more than usually clear that 'bring back the cat' is not a political proposition, but a portmanteau icon representing a deferential, crime-free never-never land located before the Second World War. Even our beloved prime minister, who explicitly distances himself from what he calls the 'hang 'em and flog 'em brigade' thinks that the period before 1939 was relatively crime-free, and that the present high-crime rates are the result of specific social changes that have occurred since the war.

It was understandable that the people who voted in Mrs. Thatcher in 1979 might have regarded the Cane, the Birch, the Noose and Winston Churchill as a symbol of a lost world where everything was simple and secure, if occassionally painful. Most of them spent their teenaged years in a world where these things were a reality. (They also remembered a time before many Indians and Afro-Carribeans had settled in the UK.) But it's harder to see why the mythology of a post-Blitz loss of innocence persists at a time when no-one without a bus-pass can possibly remember the War.

If, having said all that, anyone still thinks the question is worth asking, then I would say that deliberately hurting naughty people is a good idea if you believe the following:

1: The sole or main purpose of courts is to deliver Justice.

2: The purpose of Justice is to restore a state of equilibrium by making a criminal suffer to a degree comparable to his victim. This process directly benefits the victim: if the criminal doesn't suffer, the victim is harmed. While it may have various utilitarian side-effects, the punishment of criminals is therefore an end in itself. (It follows that concept of 'rehabilitation' is a denial of natural justice. If a thief learns a trade while he is in jail, and as a result gives up stealing and spends the rest of his life earning an honest living then he has benefited from his crime and been rewarded for his wrongdoing – particularly if the victim doesn't also get free woodwork lessons.)

3: Therefore, the only or main purpose of prisons is to punish criminals by keeping them in disagreeable conditions for long periods.

4: In practice, prisons are comfortable, not to say luxurious institutions. Therefore in nearly all cases, 'natural justice' does not occur: a murderer who spends 30 years in a prison can be said to have 'got off scott free'. On a personal note, I should mention that I went to Bognor Regis on three occasions and Clacton on Sea twice, and that prison is not in fact very much like a holiday camp at all. 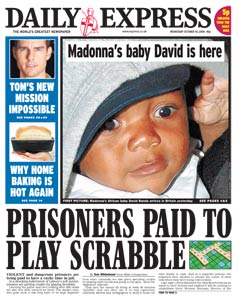 If you accept these superstitions, then whipping must indeed seem very attractive. It's the only thing a court can sentence someone to which is purely punitive; and therefore, delivers the maximum quantity of natural justice. If you don't, then it was a silly and pointless form of brutality for brutality's sake, to be regarded roughly at the same level as putting the brick on trial because it fell on the King's toe. Even to ask the question 'Could flogging ever have a place in the modern criminal justice system' is to move the discussion onto non-rational territory.