"Do not let your happiness depend on something you may lose."
C.S Lewis

"Do not let your happiness depend on something you may lose. If love is to be a blessing, not a misery, it must be for the only Beloved who will never pass away."
C.S Lewis 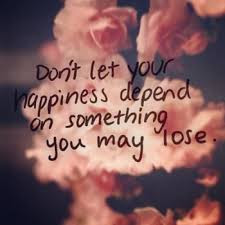 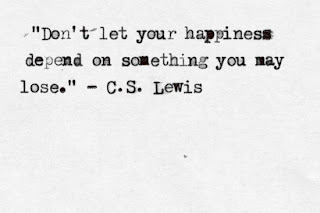 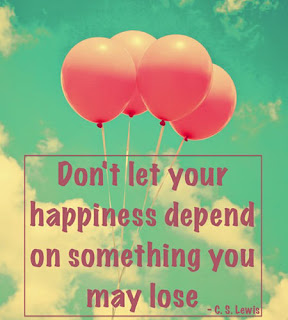 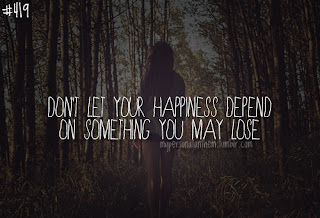 
In words which can still bring tears to the eyes, St. Augustine describes the desolation into which the death of his friend Nebridius plunged him. Then he draws a moral. This is what comes, he says, of giving one’s heart to anything but God. All human beings pass away. Do not let your happiness depend on something you may lose. If love is to be a blessing, not a misery, it must be for the only Beloved who will never pass away.

Of course this is excellent sense. Do not put your goods in a leaky vessel. Don't spend too much on a house you may be turned out of. And there is no man alive who responds more naturally than I to such canny maxims. I am a safety-first creature. Of all arguments against love, none makes so strong an appeal to my nature as "Careful! This might lead you to suffering."

To my nature, my temperament, yes. Not to my conscience. When I respond to this appeal, I seem to myself to be a thousand miles away from Christ. If I am sure of anything I am sure that His teaching was never meant to confirm my congenital preference for safe investments and limited liabilities. I doubt whether there is anything in me that pleases Him less. And who could conceivably begin to love God on such a prudential ground -- because, so to speak, the security is better? Who could even include it among the grounds for loving? Would you choose a wife or a friend -- if it comes to it, would you choose a dog -- in that spirit? One must be outside the world of love, of all loves,  before one calculates. Eros, lawless Eros, preferring the Beloved to happiness, is more like Love Himself than this.

I think that this passage in the Confessions is less a part of St Augustine's Christianity than a hangover from the high-minded Pagan philosophies in which he grew up. It is closer to Stoic "apathy" or neo-Platonic mysticism than to Charity. We follow One who wept over Jerusalem and at the grave of Lazarus, and who, loving all, yet had one disciple whom, in a special sense, he "loved". St Paul has a higher authority with us than St Augustine -- St Paul who shows no sign that he would not have suffered like a man, and no feeling that ought not so to have suffered, if Epaphroditus had died.

Please consider buying my book about Lewis and Tolkien
http://www.andrewrilstone.com/p/buy-my-stuff.html

Good stuff. ("Sotic" presumably should be "Stoic"; "Sotic" would be appropriate for boozy old CSL though).

Not so much misquoting as quote-mining. But thanks for clearing it up.

A good point. Although actually, C S Lewis was wrong on one detail, too, because it's not Nebridius's death that St Augustine describes being so cut up about, it's the death of his unnamed friend from Thagaste, fourteen years earlier.

"Do not let your happiness depend on something you may lose. If love is to be a blessing, not a misery, it must be for the only Beloved who will never pass away."

Doesn't hold out much hope for love of a spouse, or a child or anything mortal.

Of course if the message is that the only dependable is love for an immortal deity, then be a bit careful when it's mediated through that thing called faith.

That dependency on permanence is the problem. Nothing is permanent.

The bit you quote is Lewis's summary of Augustine, yes? And Lewis thinks Augustine is wrong, yes? Love means taking risks and getting hurt, but the idea that you'd abstain from love to avoid pain is quite wrong -- Lewis thinks it comes from Augustine's Stoic upbringing? So I am not quite sure what your point is?