I: In Which Everybody Eats Their Hats

And then we smashed up everything,
and this was the funniest part
we smashed some rotten old pictures
which were priceless works of art!
John Betjeman

A week has passed since the election. There has been a lot of hysterical defeatist talk. A lot of people have taken it personally.

So I am going to try to take a deep breath and talk about what has really happened in as level headed and non-partisan a way as I can possibly manage.

Actually, I'd be prepared to make out a case for Compulsory Voting. If instead of having a big thing called election day where you positively walk to the polling station and positively queue up and positively put a cross in a positive box (remembering that if you put a tick your vote may not be counted) but instead had something more like a census, where over a period of fortnight you got a visit from a government official to whom you had by law to express a preference as to who you would like to see running the government for the next five years... Well, that might be rather an improvement. A survey about the actual state of public opinion, as opposed to a complicated game about who could be persuaded to walk down the hill in the rain. Yes, indeedly, there would have to be a "none of the above" option; and yes, indeedly, it would probably have to be a "preferential voting" system; and yes, indeedly, there would have to be a conscience clause to exempt members of the First Church of Christ Luantic and others who don't agree with voting on moral grounds; and yes indeedly there would have to be safeguards to ensure that the ballot was secret and no-one voted on behalf of their Granny. But this kind of thing can usually be sorted out with a bit of small print.

There is always someone who says "It is impossible to look over someone's shoulder in a voting booth, and therefore any change to the election system would fatally compromise the sacred secret ballot.” They are always wrong.

Compulsory voting would change the dynamic of elections far more radically than Proportional Representation would have done. The main political parties have spent a century evolving into efficient machines for persuading their supporters to actually walk down the hill and vote for them. Elections aren’t about persuading people to support you; they’re all about persuading your supporters to actually cast their vote. Imagine if they had to to persuade people who had to vote for someone that you were the someone they ought to vote for.

Until we have compulsory voting "choosing not to vote because you don't like any of the candidates on offer" seems a perfectly democratic choice. But you will be massively relieved to hear that I changed my mind at the very last minute. I voted Green.

I am not as exercised by environmental issues as you presumably think I ought to be. I entirely agree that it's a jolly bad thing and that something should be done about it. But I really don’t know what fracking is, or what precisely it has to do with badgers. Yoko Ono is against it.

I voted Green because they fought a positive campaign. It is possible to get a little bit inspired by "Vote big; Vote brave; Vote what you believe in; Vote while we can still fix this; Vote for the common good". It is really not possible to get inspired by "Hard working families better off" even when the lump of rock it is carved on is very big indeed.

I voted Green because it looked as if they were actually in with a chance of winning Bristol West. In fact they came second, pushing the incumbents into third place. If a few (well, a few thousand) more abstainers like me had changed our minds, they could have taken it. And I felt that the presence of two Green MPs in Parliament, as opposed to just one, would have made a small but significant difference when Ed came to construct his coalition.

I believed in The Polls. I believed that the only remaining question was whether Lab/SNP would outnumber Con/UKIP/Lib Dem and whether a Lib/Lab pact was still on the cards and whether the one lot would vote the government down and force a second election if the other lot tried to go it alone.

Or maybe the Tories won the election precisely because the polls said they wouldn’t? Remember we don’t vote for the candidate we want to win. That would be undemocratic. We try to guess how our neighbours are going to vote (having first guessed how they think we are going to vote, based on how they think we think they are going to vote) and then place our cross, or tick, in the box that we think will produce the least worst result. The Tories spent the second half of the campaign telling us we didn’t dare vote Labour because Labour might form a coalition with the Scottish Nationalists. If the Tories had any chance of winning then the question of coalitions doesn’t arise. The main argument for voting Tory only works if the polls are telling us that the Tories aren’t going to win.

I’m not, as the fellow said, suggesting any sort of a plot. But there could very well be Darwinian pressure on the pollsters to use methodologies that tend to produce polls which result in Tory governments (as opposed to polls which predict Tory governments.) Because otherwise, the Tory press would stop commissioning opinion polls.

Miliband wanted to slap a £3,000 p.a tax on properties worth more than £2,000,000. He wanted to abolish a vindictive little means test which said that poor people get slightly less welfare if they have a house which is slightly bigger than they need. He wanted to increase the minimum wage to a level that a person could actually live on, but, like St Augustine, not yet. I mean, good arguments on both sides, and everything, but things have got pretty desperate when the Mayor of London is describing these kinds of cautious, gradualist measures as “commie”. 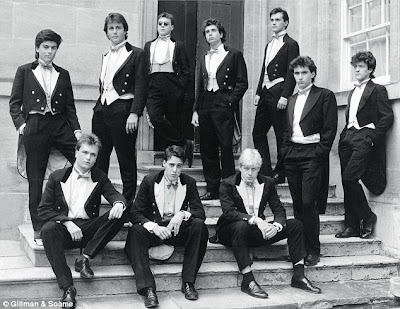 When I was at college in the 1980s, everyone called everyone a commie and everyone else called everyone else a fascist. It was how debate was carried out. Student politics was all about boycotting Barclays Bank and This Is A Nuclear Free Toilet and refusing to leave the canteen until the Thatcherite junta ended its colonial occupations of the Malvinas islands. The Left had crazy Utopian dreams about making Nelson Mandela president of South Africa and sitting down round a negotiating table with the Sinn Fien and letting homosexuals get married. The Right was mainly interested in antagonising the Left. I remember the poster depicting the Karl Marx Memorial with the slogan “Do you really want your student union to be run by some old corpse in Highgate Cemetery.” Some of them even thought that was amusingly satirical to wear "Hang Nelson Mandela" badges.

We all did silly things at college. If I became Prime Minister I’d be haunted by photographs of myself in dressed as an orc for a LARP event. (And, oh dear god, they may be one of my blacked up as a voodoo priest for a pirate themed RPG.) We’ve all seen the photos of David and Boris and their friends in their weird frock coats, poised to smash up a few restaurants and burn a few £50 notes under the noses of poor people. The point is that the Left mostly grew up. The Left mostly stopped calling people “fascists”. They decided it was more constructive to carve “controls on immigration” on slabs of rock and write essays explaining that the true essence of socialism was people who went to posh supermarkets. But the Right, so far as I can tell, has never grown up. They are still here, marching into sticky-floor and plastic-cup bars and demanding a dry-sherry, doing whatever they can think of that will annoy the left, smashing everything to pieces and assuming they can get away with it because Daddy has money. Only now, they’re going to do it to the whole country.

[**] A representative sample of Labour voters — let's call her "Mum" — says that it isn't fair to vote Green on the basis of what they said during the election because they had not the remotest chance of winning it and could therefore say whatever they liked. Miliband had to give vague, non-committal, right-wing promises because there was a serious chance that he might have to deliver on them. This is a perfect valid point but tends to support my "ignoring the election altogether" strategy.

A little while ago I wrote down everything I knew about politics and put it in a book. It would be lovely if you read it.