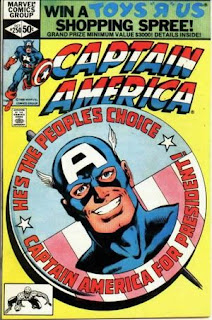 Some people try to persuade Cap to run for President. He decides not to. 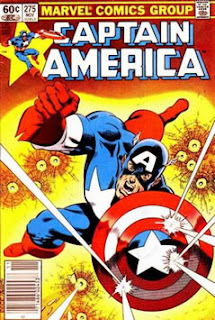 Captain America is walking home with his Jewish girl friend and his Jewish landlady when he finds that a nasty symbol has been painted on the door of their synagogue.

Fairly unusually for a 1980s “issue” story, there is no villain called “Zion Smasher”. The outbreak of antisemitism was not caused by the Hate Monger or a Madbomb, but by some rather pathetic neo-nazis. Cap is, throughout, the voice of reason: Captain Liberal.

"I agree that these neo-nazis are a vile breed —  but if we deny them their rights, where would we draw the line? Who decides which beliefs are acceptable and which aren’t? A free society has to allow all ideas— both noble and ignoble!"

I despise what you say, but will literally defend to the death your right to say it.Believe it or not, that was how we liberals still thought in the Olden Days.

But in case we thought that "liberal" means "soft on Nazis", Steve Rogers (who is working as a commercial artist) rips up some pages of art when his prospective employer makes a mildly antisemitic remark. He goes on protest against a Nazi rally, but realizes that the counter-demo is counter-productive. (We’re handing these fools free publicity").

The Nazis and Commies of the 40s and 50s were cardboard villains; and in the 60s and 70s this kind of thing would probably have been handled through thinly disguised metaphor, but writer J DeMatties depicts racist rhetoric directly — too directly, perhaps, for what was still supposed to be kid-friendly book.

"Does that mean that the blacks — with their delusions of equality — and the Jews — with their my of the six million holocaust victims — should be allowed to walk beside us on the street? To control what we read in newspapers and see on the television?”

When someone in the audience starts throwing bottles, Captain America has to jump in and play mediator and devils advocate

"Can’t you see that in stooping to your enemies level, you’re being made over in his image”.

All quite nice and earnest and well-done, I have to say. I like it best when Captain America wins the day by being honest and sensible and good, not by having serum boosted muscles.

But the most notable thing about the issue is episode is the final panel in which something happens which hardly ever happens in a comic books....

Back in issue 237, with Sharon Carter dead once again, Captain America had gone off in another of his bold new directions. He moved into an apartment; got a job as an artist (even drawing Captain America for Marvel Comics at one stage) and acquired a kind of supporting cast.

"I’ve done a lot of thinking these past few days — and I think its time I stopped hiding behind a blue and white mask. And maybe; just maybe; I’ll even settle down one of these days, marry and raise a family.”

Ten issues later, John Byrne gave him a new neighbour, Bernie Rosenthal, who everyone, including Steve, recognize instantly as the New Love Interest. (Just look at the fear in his eyes when he first sees her.)

The romance staggers on for a number of issues, with Bernie intermittently spotting that there is something odd about her new boyfriend — he lets slip that he can remember when movie tickets only cost ten cents —  and Steve suffering from the usual Marvel Comics commitment aversion.

The neat thing about issue 275 is that Bernie, while listening to Captain America speech-making, realizes that he has the same voice and mannerisms as Steve Rogers. She just spots that they are the same guy, as one presumably would. There is no big unmasking scene: the two characters just catch each others eyes, and she knows that he knows that she knows. After a couple of false starts, Bernie announces that she loves Steve even more now that she knows about his double life.

I never really bought the idea of Captain America living in a bachelor pad in a tenement building. The only secret identity I’ve really believed in is the hopeless U.S Private being yelled at by the Sergeant; although I think the New York cop being yelled at by the police Sergeant should have been given more of a chance to take. The best idea, actually, is the one which pops up during the unfairly reviled Rob Liefield issues, where Steve Rogers is an all-American dad in a suburban house with a nice lawn and a nice fence and a nice wife and two nice kids. If I’m-loyal-to-the-dream lives anywhere, that’s where he should live. But that turns out to be a fake identity created by SHIELD; the wife and kids are robots. And the whole thing is actually a bad dream Franklin Richards is having.

Could we have bought into Steve and Bernie living happily ever after? Perhaps. We've accepted Lois and Clark and Mary-Jane and Peter, after all. In the event, Bernie decides to make the logical career step from glass-blower to criminal lawyer; and the relationship comes to a more or less amicable ending. Cap leaves the apartment and moves back into Avenger Mansion in # 317. We see Bernie a few more times, generally when Cap needs a walk-on lawyer, but it's taken for granted that they have Grown Apart. Although he’s had flats and apartments since, there has never really been another attempt to give Captain America a life. 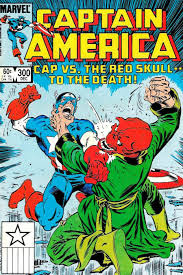 Almost the last genuinely good instalment of the first "volume" of Captain America. The Red Skull has been reconfigured as a full scale gothic villain, complete with Germanic castle and redefined —  no longer as Hitler’s bellboy, or a Nazi revivalist but a force of nature who fights Captain America because it's his destiny to fight Captain America.

“The fire of cosmic loathing, of divine madness! You finally see that this is the way it must be, two gods locked in raging battle, for all eternity…”

The Skull's "plot" to bring Captain America down to his own level by making him kill him has been done before. The resolution, where Cap refuses to kill the Skull at the very last moment, but the Skull obligingly dies of a heart attack anyway, has been done seventeen or eighteen times before. But there was a pretentious importance to it, as if something really big had just happened. We see the Skull’s daughter unceremoniously burning his body in the next issue, and the twisted-attractive Nazi aesthetic felt about right.

If only comic books allowed stories like this to stand. If only this could really have been the final final final appearance of the Red Skull. But we are still in the Marvel Universe, where only Bucky dies forever. 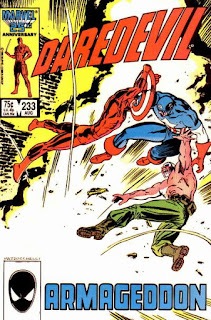 This comic re-defined Captain America far more than many of the self-proclaimed changes of direction in Cap’s own title did.

Everyone remembers the scene where the officer appeals to Captain America’s loyalty, and Cap replies “I’m loyal to nothing general —  except the Dream.” "Loyal to the dream", which has actually been used as a tag-line once or twice, is actually a summary of the speech from #250 where Cap turned down the chance to be President.

"I have worked all my life for the growth and advancement of the American Dream. I believe that my duty to the Dream would severely limit any abilities I might have to preserve the reality."

But for me, the real defining moment is a descriptive caption (implicitly written by Daily Bugle journalist Ben Ulrich) when the Avengers appear in Daredevil’s down-and-dirty Hells Kitchen environment.

“Out of nowhere they come: a soldier with a voice that could command a god … and does”

(Thor is in the Avengers, geddit?)

“I am not Captain America" he would say, many years later "I’m just the guy who wears his costume.” 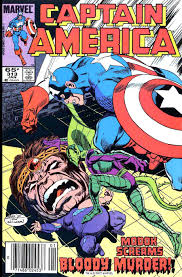 Captain America comes into some money (40 years of back pay from the US Army!) and decides to set up a phone hotline so Ordinary Americans can call on him when they are in trouble. He is overwhelmed by more cries for help than he can cope with, and finds that his computer is being tapped. It turns out that the culprit is a young man who styles himself “the biggest Captain America fan in New Jersey.” Cap decides to recruit the young scalawag, so he can use his computer expertise to filter the calls and pass the important ones on to him. (A sort of call-back to Rick Jones "brigade" of radio hams in the earlier Avengers, which was itself a call back to Kirby's teen-gang comics like Newsboy Legion.)

This is another valiant attempt to give Captain America something to do which isn’t following up rejected Avengers and Agent of SHIELD story lines. It doesn’t take. But it’s rather lovely to go back to a time when home computer’s were an arcane piece of technology which required explanation. (A MODEM is a device linking computers to the telephone, apparently, and “hackers” are “computer enthusiasts".) 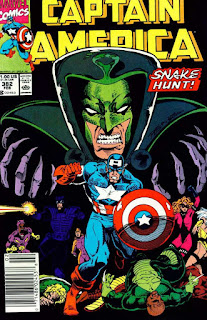 Oh, is there never to be an end to it? 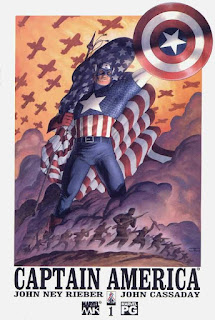 There was always a danger that the 11th September 2001 attacks on America would send Captain America off into a new cycle of gung-ho patriotism. This directly post-911 issue begins with Cap digging survivors out of Ground Zero with his bare hands and punching Nick Fury when he suggests his powers would be better employed fighting the Taliban directly. He walks home, and sees some white thugs about to stab an American Muslim: in a genuinely arresting image, the knife breaks on his shield. “I understand you want justice. This isn’t justice. We’re better than this.” As would-be attacker and victim shake hands, Steve walks off in full Captain Soliloquy mode.“

"We’re going to make it through this. We, the people. United by a power that no enemy of freedom could begin to understand. We the people. We share... We are... The American Dream.”

Having said that, I have to admit a sneaking liking for the gung-ho Captain America of the Ultimates Universe.

"Do you think this letter on my head stands for FRANCE?" 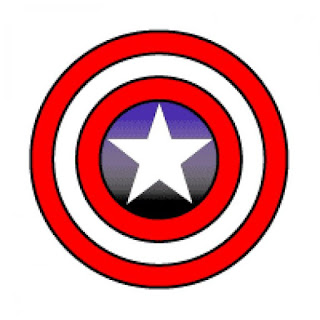 Support this blog by pledging to pay 50c, $1, or even $5 each time your blogger writes an article.


I am a red-blooded all American male: CLICK HERE!


I am a socialist pacifist scum of the earth: CLICK HERE!