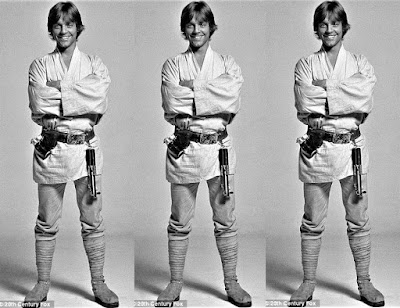 We know where we go when we watch Doctor Who. No such place ever actually existed, but everyone claims to have been there. It was a very long time ago: everything was black and white. We were very small: small enough to fit into the interstices between walls and furniture. TVs were very big. Pieces of furniture in shared family spaces, not electronic toys in our private rooms. “Putting on the TV” was a positive choice. The pictures were both real and not real. We wanted to look at them and hide from them at the same time. Middle-class. Suburban. Domestic. Ubiquitous. Safe.

Modern Doctor Who has written about that space almost obsessively, but it has never remotely taken us there.

Yoda voice: That is why it fails.


There are AT-AT Walkers: new AT-AT Walkers that walk on their knuckles and something in the background that might be a floating galleon but might only be an Imperial Shuttle.

The Walkers arrived in Empire Strikes Back. They were a replacement for the Death Star. Never quite as magical. But magical just the same.

There are white alien goats on a snowy background. I suppose if there are Walkers there has to be Snow. First films have Sand and Second films have Snow. The third film will go back to Jakku, you mark my words.

The Millennium Falcon is being chased through a fiery red cave by TIE Fighters; which makes us think of the wrecked Star Destroyer from part VII and the Death Star superstructure from part VI and the space worm from part V and coming out of hyperspace near Alderaan in part IV. This will come very near the beginning of the film, as a warm up, to tell us that Star Wars has started again and the toys are all intact.

There is Chewbacca on the flight deck, as if he was escaping from Mos Eisley, except that Han has been replaced by a Penguin. Every saga has a Jar Jar. Every trilogy has an Ewok. We complained about George's silliness but we missed it when it wasn't there. The Penguin will have a very small part. He may only appear in this one scene. Everyone will always have heard of him and he will even eventually have his own comic, but all he will actually do is shout “It’s a trap!”

There is battle with big space ships and TIE fighters and X-Wings and a stirring speech about lighting the flame that will become the spark that will burn the fascists down although we all know that the fascists won’t burn down until the last ten minutes of Episode IX. There is Po Dameron looking resolute and Finn fighting the shiny gold lady Stormtrooper officer with a a big glowy laser-chainsaw. This will happen at the end. Po and Finn will be blowing things up resolutely while the Proper Plot happens somewhere else.

The Proper Plot will be about Rey turning to the Dark Side, and Ren turning back to the Light. Or perhaps about Ren resisting the light side and Rey resisting the Dark. That is the Proper Plot of every Star Wars movie except Star Wars. Someone is tempted by the Dark. Someone is tempted by the Light. Indeed, that is the plot of every possible movie. (I think Joseph Campbell said that.) 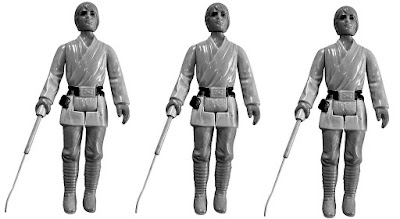 We always knew that this moment would come. Not when he lit the torch at his Father funeral pyre but from the very first moment in the cave. I-was-once-a-Jedi-knight-the-same-as-your-father. There would always come a moment when stroppy James Dean teenage Luke Skywalker would be old. We need him to be old because we need him to be a Jedi Knight and Jedi Knights are old. Alec Guinness is the only and all Jedi Knights just as happens Leonard Nimoy is the only and all Vulcans.

The moment we imagined, when Luke Skywalker is a Jedi like Obi Wan and he is teaching other Jedi (including me, me, please, including me) — the moment when the Jedi actually Returned — has already happened and is already over, somewhere in the space between VI and VII. I suppose we should never see it, in the same way we should never have seen the Old Republic, because Luke Skywalker and the New Order of Jedi, is part of the happy-ever-after which was implied during the fireworks and the Ewoks. And it was not a happy ending. Of course it wasn’t a happy ending because everyone living happily ever after is how a story ends and there have to be more stories. So we get to see old Luke, but we don’t get to see Jedi Luke. We get to see Luke the Last Jedi.

Episode VII finishes with Rey holding Luke’s lightsaber out to Luke, and us not knowing is Luke takes it or not. (Spoiler: No.) The Trailer finishes with Ren holding his hand out to Rey and us not knowing if she takes it or not. And that makes us think of Daddy Vader holding his hand out to Luke, which is why Great Big Hologram Leader Guy (who has got smaller) bellows “FULL…FILL…YOUR…DES…TIN…EE” in the trailer. (He is probably saying it to Kylo Ren, but he could just as well be saying it to Rey. Of course he might not say it at all. That sometimes happens with trailers.) This will happen in the middle of the movie. Rey will face a difficult time in her training when she is tempted by the Dark Side. Maybe she will break off her Jedi training with Luke because she sees a vision of Kylo torturing Po and Finn. Maybe when she is on the point of  turning to the Dark Side, Ren will say "No, Rey, I am your half-brother."


Ren has a shiny black Tie Fighter, just like Grandpa’s. As he whizzes around he looks for all the world like Anakin Skywalker in the cartoons. (But Anakin in the Cartoons is now the Real Anakin. Anakin in the Cartoons very nearly makes up for Anakin in the prequels. He is a, waddyacall, Redemptive Reading.) But he, Ray, can hear Snoke’s voice, just like Luke Skywalker heard Ben’s voice and it goes boom boom boom FULFILL YOUR DENSITY boom boom boom BECOME WHO YOU WERE MEANT TO BE boom boom boom. All films are always about becoming who you were meant to be. (I think Joseph Campbell said that.)  Carrie, god bless her is on the big ship (the same kind of ship that Mon Motha had) and Kylo is aiming his weapon at her. Luke’s big moment was to blow up the Death Star. Kylo's big moment is to kill Mum. (SPOILER: He has already killed Dad.)

Maybe he will kill his Mum and go totally over to the Dark Side. Maybe he will not kill her an come back to the light. Maybe the Millennium Falcon will come over the hill at the last possible moment.

One thinks of Locutus of Borg, possibly.


Luke says “I’VE SEEN RAW STRENGTH LIKE THIS ONLY ONCE BEFORE IT DIDN’T SCARE ME ENOUGH THEN IT DOES NOW” and Big Hologram Gollum Guy says “When I found you I saw RAW UNTAMED POWER”. I suppose Luke is talking to Rey about Kylo Ren and I suppose Snoke is talking to Kylo Ren about Ben Solo. I suppose Luke is going to refuse to train Rey in case he buggers it up and sends her to the Dark Side as well. Which will send Rey into the arms of Ren for help. Which will result in Ren’s ultimate redemption.

Or else something completely different will happen.


To summarize: Rey and Ren are powerful Jedi and are going to be tempted in various ways and there is going to be a battle involving X-Wings and capital ships and walkers and a chase involving the Millennium Falcon.


Which is, I suppose, only like saying that this cowboy film will definitely have horses, a criminal, a sheriff, some native Americans and a big gun fight in a frontier town. Star Wars isn’t a saga. It’s a genre. (I said that.)


A flea-pit olden days 1970s cinema with fizzy orange juice and ice-cream. Or maybe some nuts. Or a big London movie house with posters and programmes and people selling knock-off merchandise outside?

Or am I misremembering? Was Star Wars always something that we were watching again on DVD. Or VHS. Or just ITV?


The movie called Star Wars (there is only one movie called Star Wars) was great, and we have all seen it forty or fifty times and will see it another twenty, thirty forty times before we die. (I have measured out my life in coffee spoons.) But before there was a movie called Star Wars there were Star Wars toys. The original dolls were almost comically badly done: no-one even tried to model Mark Hamil’s face and the white plastic smock molded onto his body has only the most passing connection to the greying desert gear he wears in the movie. I almost wonder if the appeal of the figures wasn’t in the packaging: the shiny card with the Star Wars logo and a big colour picture of the iconic twin suns scene printed on it? The closet you could get to putting your hands on a bit of the film and keeping it? No-one could afford to buy them, obviously. We went on pilgrimages to toy shops to gaze at them enviously.

Isn’t that what the word “iconic” literally means?

The idea of Luke Skywalker, the blond guy in white with a utility belt and glowy sword can somehow be contracted to three inches of barely articulated plastic and have endless battles with the idea of Darth Vader, a black masked villain with a cheap cellophane cape. How many millions of battles did Luke Skywalker have with Darth Vader on how many thousands of bedroom floors between 1977 and 1980?

At least until their lightsabers snapped off.

We can now see that the action figures were insufficiently iconic: that they contained too much of the real Mark Hamil and the real Alec Guinness. Forbidden Planet will sell you brilliantly authentic replicas of Darth Vader costing hundreds of pounds but those are not for children to play with, they are for adults to put on the shelf and forget about. The real Star Wars; Star Wars stripped of all particularity and specificity, the pure idea of the Dark Side and the Light, is now surely the Lego figurine? (I am serious. Every child has seen thousands of Lego Stormtroopers before the Star Destroyer swallows up the Blockade Runner, and every child knows that Vader is Luke's father before they know who Vader and Luke are.)

We can't watch Doctor Who again. We wouldn't physically fit behind that damn sofa. But perhaps we can crouch down on the bedroom floor one last time. There can't ever really be a new Star Wars story, and we wouldn't want there to be. (George Lucas never really understood this.) But we can take the Lego minifigs out of the box and play out our favorite scenes in a slightly different order. I'm pretty sure Joseph Campbell said that.