Ernie: Tonight, I shall perform Singin' in the Rain.
Eric:   Ah. Gene Kelly did that very well.
Ernie:  Yes. But I shall do it just that little bit better.

On the first page of Doomsday Clock #3, we clearly see the Comedian’s badge. It has a little highlight on the edge, a little arc where the colour is slightly lighter, a simple artist's trick to indicate that this is a shiny badge which reflects the light.

Each time we saw it in Watchmen, it was simply a yellow disc.

A trivial thing; a tiny thing. A minor difference in artistic style.

We see the murder of Comedian, which was only shown in fragmentary flashbacks in the original comic. It has been dubbed into the new, photo-realistic style. We see it from a neutral, camera-man’s point of view; where the original comic showed it subjectively, from the point of view of the killer. As he falls, the camera focuses on the shiny, blood splattered badge. The final frame of page 2 shows us the badge by itself, on a black background.

Realization dawns. Doomsday Clock is for people who saw the movie, but never read the comic.

No-one attempts to sing The Times They Are a Changin’. I would have liked it better if they had.

As the Comedian falls, a set of black lines, like the slats of a horizontal window blind, block out the panel. He never hits the ground. He ends up in the sea outside Gotham City.  Doctor Manhattan, or at any rate, someone with blue legs, greets him. The person with blue legs drops the badge in the sand alongside him. (It isn't clear where he got it from.)

Whatever Doctor Manhattan is planning, part of his purpose is to erase Watchmen the graphic novel. The dead Comedian has been teleported out of the story. No corpse to bury; no badge for Rorschach to find.

A very large chunk of the graphic novel never happened.

No interesting conversation or confrontation between fake Rorschach and ther Batman is forthcoming. Rorschach gives ther Batman the original Rorschach’s journal, and ther Batman says that Doctor Manhattan is in Arkham Asylum, so they go off together to bust him out.

But…gotcha…it was a trick, and when Rorschach goes into the cell where Doctor Manhattan is meant to be, ther Batman locks him in and leaves him there. The episode ends with Rorschach shouting “Let! Me! Out!” like a psychopathic Fred Flintstone.

In the old Avengers / Justice League cross over, all the other superheroes have an enormous fight while Batman and Captain America go to the Batcave and sort everything out like civilized people. There is an old geek joke that the answer to the question “Who would win a fight between Batman and X” is always "Batman" because while other characters may have superhuman powers, Batman’s power is that he is a BADASS. He is more of a badass than Rorschach, at any rate. The deal appears to be that DC characters can run rings around the Watchmen characters because they are 1980s comic book characters and the DC characters are real.

Where fake Rorschach got real Rorschach’s journal from, we do not yet know. In the graphic novel, it was last seen in the possession of the two guys from the New Frontiersman, but that part of the plot may very well have been overwritten.

We see fake Rorschach’s face: the unmasking is shown as if it is a big reveal, as if we ought to know who the young black guy is, but I certainly didn’t. Doomsday Clock is taking place 7 years after the end of Watchmen, so my first guess could still be right: Bernie from the newstand would be 19 or 20 by now. But we see fake Rorschach dreaming that he is driving away from Ozymandias’s squid, which suggests that he was old enough to drive a car in 1987. 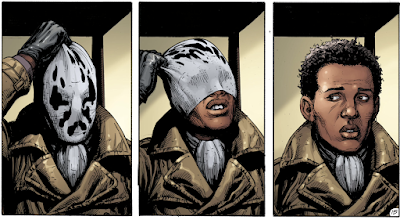 The Comedian and Ozymandias have a five page fight scene. The Comedian throws Ozymandias out of the window but he survives. Lex Luther is badly injured. 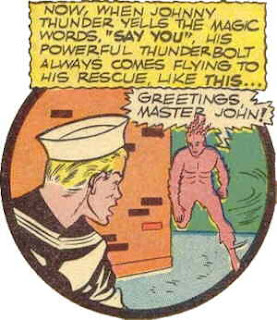 A surprising amount of space is given over to a fictional black and white detective movie called The Adjournment featuring a fictional detective called Nathaniel Dusk. Nathaniel Dusk is an obscure DC character; he appeared in a couple of mini-series in the 1980s. It appears that this fictional film is meant to have the same ironic connection with the action that Tales of the Black Freighter did in Watchmen itself. I am sure that remarks like “there’s a big twist where one of the dead guys turns out to be a killer, too” will turn out to be terribly ironic or prophetic in retrospect. I fimd the Black Freighter stuff much the least interesting part of Watchmen, although obviously I never, ever skip it.

One of the people watching Nathaniel Dusk on TV is a Mr Thunder. Mr Thunder is a resident in an old people's home, and is expecting that his family will come and visit; like Godot, they never show up. There is quite a lot of conversation at the old people’s home, none of which seems relevant to the main story.

Mr Thunder is presumably Johnny Thunder. Johnny Thunder was an actual DC character actually published in the 1940s. He was also a member of the Justice Society of America, which again, was an actual comic. The Justice Society is to DC Comics very much what the Minutemen are to Watchmen: the aging heroes of a previous generation. In the 1960s and 1970s, the Justice Society was deemed to have existed in a parallel earth, Earth-Two, whereas the contemporary Justice League lived on Earth-One. Then, in the 80s, Marv Wolfman promulgated a dogma that the Justice Society and the Justice League both existed in the same continuity, the J.S.A in the 40s and 50s, the J.L.A in the 70s and 80s. I am not entirely certain what the current doctrinal position is, but I assume that the status of the J.S.A is going to be changed, again, through Doctor Manhattan’s tinkering.

This may turn out to be very interesting if you are keeping tabs on the ins and outs of the DC universe. In the comic that we have in front of us, various senior citizens watch TV for several pages, and no answer to the question “Who are these people and why should I be interested in them?" is forthcoming. 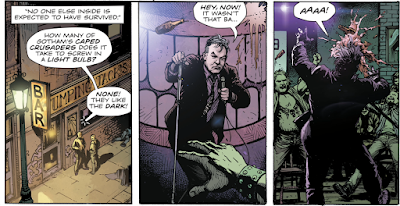 The Mime and Marionette walk into a bar. (Ouch. It was an iron bar.) There is a comedian (geddit?) telling very weak jokes. The bar is on the Joker’s territory; after beating up everyone in the bar, Marionette says that she is going to go and look for the Joker. The Mime seems to be actually able to kill people with his imaginary gun. Marionette implies that she was at one time pregnant with Doctor Manhattan’s child. They both wear clown make up and would fit into a Joker story fairly well. Please, flying spaghetti monster, do not let it turn out that the Mime is Doctor Manhattan's son.

The comedian in the bar is Stewart Lee. Not a caricature or a stand-in: it’s simply a portrait of Stewart Lee.

Stewart Lee is a British comedian. He deals in sweary, surreal, bad-taste, politically inspired riffs which often do not have punchlines.

Here is an example of a Stewart Lee joke:

“How many of Gotham’s caped crusaders does it take to screw in a light bulb? None! They like the dark!”

This would have been a pretty poor scene if it had been a generic, faceless comedian. (Do stand ups, however weak they are and however scuzzy the venue, really deal in those kinds of playground riddles?) But Stewart Lee can easily be shown to be an old friend of Alan Moore’s. When Radio 4 ran a strand in which celebrities and performers got to interview their mates, Stewart Lee interviewed Alan Moore. (Alan Moore interviewed Brian Eno.)

Someone throws a glass in Stewart Lee's face.

It is said that in the 1970s, Marvel Comics stopped ignoring Jack Kirby and became actively hostile to him. There is a persistent oral tradition that archivists used to burn priceless pages of Kirby artwork as an initiation rite. Another story says that photostats of his work used to appear on bullpen noticeboards with puerile, disparaging lettering added. It is certainly true that the letters pages in The Eternals were filled with knocking copy; and that editorials started to appear saying that Peter Parker would never have asked for co-ownership of characters which he had co-created. The wheel turned around and the wheel turned around and now Marvel revere their co-founder as much as everyone else. Doubtless Alan Moore’s genius will be recognized after he is dead. But right now, this comic has passed beyond not being very interesting and become the literary equivalent of taking a match to Alan Moore’s legacy.

I find the Black Freighter stuff much the least interesting part of Watchmen ...

That, and the essay about how scary owls are. And the bit about the garage owner with the opera record.

... although obviously I never, ever skip it.

Sadly, neither do I. It would seem wrong.

Unknown said...
This comment has been removed by a blog administrator.
Wednesday, 25 April, 2018