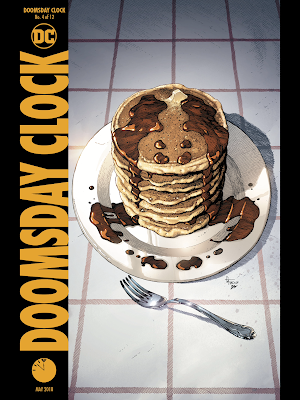 Doomsday Clock #4 contains a story. Not a great story: but definitely a narrative; one which would make sense even to someone who didn't know the difference between "Earth-2" and the "New 52". It is therefore the best issue so far.

Like Watchmen itself, it is very, very dense: too dense to really understand at a single reading. Like Watchmen it keeps jumping between the present day and the character's memories, showing how things in the past continue to influence things in the present. Like Watchmen, it involves a criminal being given a Rorschach test by a psychiatrist. Twice. But unlike Watchmen the flashback structure is spread across two different universes, which makes everything just that little bit more confusing.

Last month, our hero, Fake Rorschach, was trapped in Arkham Asylum as a result of a ruse by ther Batman. This month we learn that Fake Rorschach (who traveled from Watchmen-world to DC-world with Ozymandias) is in fact...

....Reggie Long, the son of Doctor Malcolm Long who psychoanalyzed the original Rorschach in the original graphic novel. His parents were killed in Ozymandias's attack on New York, and he saw the giant alien squid himself. As a result, he was placed in a mental institution where he came to know Byron Lewis, the original Mothman, who had also been institutionalized. (Mothman appears in a couple of panels in the original Watchmen; he was a member of the original Minutemen team. He has a slightly bigger role in Before Watchmen, but I don't care about that.) The relationship between Reggie and Byron is pretty well done. They first meet when Reggie is thinking about jumping from the prison roof; and Byron appears to be planning to do the same thing. But of course, Byron is not really trying to kill himself -- he is testing his moth-glider wings. There is a tolerably Moorish subtext here: both characters are in their own way looking for the Light; and light is what moths, by their nature, are drawn to. But we keep seeing an image of a bug flying into a light and getting zapped by a bug trap. The scenes of the emaciated Reggie Long, on the roof, in the rain, thinking about jumping, recall the concentration camp scenes in V for Vendetta, possibly intentionally.

There is, I fear, a little bit of dot-joining going on. Geoff Johns needs to get Reggie to the point where he can plausibly impersonate Rorschach; but Rorschach was the ultimate bad-ass. So we get Mothman teaching Reggie the fighting techniques of the Minutemen; and Mothman taking trips "over the wall" on his glider wings and bringing Regggie the notes about Rorschach that his late father left conveniently on his desk. He even provides him with boarding passes which will take him most of the way to Ozymandias's base at the South Pole. (Reggie is, understandably, a little cross with Ozymandias once he finds out that the giant blue squid which killed his parents and landed him in a mental hospital was a fake.) It's all a bit contrived, but plenty of superheroes have had less convincing origin stories.

The whole thing is framed, rather confusingly, with scenes in which the present-day fake-Rorschach is interviewed by a psychiatrist in present-day-DC-Universe Arkham; so we get to go through the whole "What do these pictures make you think of?" routine twice.

The Arkham shrink turns out to be ther Batman and the mysterious telepathic lady in the next cell turns out to be Saturn Girl from the Legion of Superheroes. She springs Reggie out of Arkham.

There is still a subplot about how lots of people think that all the superheroes were deliberately created as part of a conspiracy by the American government. I hope you are keeping up.

If you enjoyed this article, please consider supporting this blog for as little as $1 a month.

But I read a website where for some reason the writer reviews all the new Wonder Woman comics and I can honestly report that that is how all superhero comics sound to people who don't read any of them. Apparently last year the Justice League all beat up evil versions of themselves from a dark future alternative timeline.

It's a bit like John Finnemore's 'listening to The Archers by mistake' sketches.

Unclear what you point is, or if you understood mine. Now there's a turn up for the books. I thought I had said that "How a damaged young man learned how to be a vigilante in a mental institution" was recognizably a story, even if you didn't know who the characters were; where the previous issues had just been exercises in manipulating points of continuity?

Oh, I thought 'uh' was a comment on how mad the idea of two narrative strands split over different universes, especially combined with random out-of-the-blue plot twists like people turning out to be heroes who have disguised themselves Mission Impossible-syle for no very good reason, and other minor characters turning out to be obscure superheroines, sounds, and saying that in fact this level of sheer bonkers plotting is par for the course in superhero comics, as far as I, as a non-reader who usually only comes across these plots when they are explained on websites that I read for other reasons, can tell.

Plus, you know, mad conspiracy stuff.

I'm with you. Yes, most superhero comics are bonkers; that is the joy of them. If anything, the problem with Doomsday Clock (apart from it being a terrible idea) is that it has not been bonkers enough: a joyless slog, someone said. "Batman meets Rorschach" and "Ozymandias meets Lex Luther" ought, at some level, to be more fun.

I referred before to Superman with Captain America's shield in one hand and Thor's hammer in the other, going up against Darkseid who is (if I recall correctly) armed with the Ultimate Nullifer.

The problem is not switching on the Archers and hearing that Some Guy's marriage is breaking down because he cheated on His Wife with Some Other Lady. The problem is when the big cliffhanger is "Esmerelda is going to miss the show!" and I have no way of knowing if this is a cow, a pig, a vintage tractor or the girl playing Aladdin at the village panto.