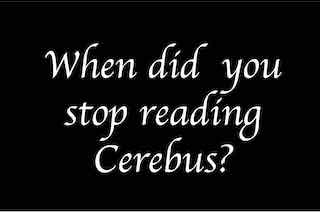 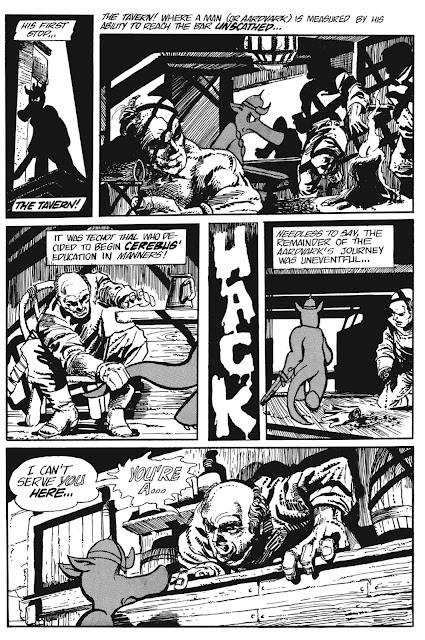 Cerebus, in shadow, and with a pile of dust behind him, rides into town. Two hairy chested ruffians look shocked. In shadow again, he walks into the Tavern “where a man, or Aadvark is measured by his ability to reach the bar unscathed”. Someone pulls his tail. Cerebus cuts his hand off.
It is 1977, and this scene very immediately calls to mind Ben Kenobi chopping the arm off Walrus Man (Ponda Babba) in the Tatooine Cantina. I don’t know if Dave Sim had seen Star Wars. He never parodies it, so far as I can recall. But that is how we would have read it at the time.
We were all playing Dungeons & Dragons and we were all used to picking up Patrons in violent taverns. In one scene—in one page—Cerebus establishes himself as the cool Player character we would all love to be.
The artwork is so much a homage to the Marvel Comics version of Conan the Barbarian that it makes my eyes hurt. There is no sense that Sim is exaggerating or parodying Barry Smith’s very detailed figure work for comedic effect, in the way he will exaggerate and parody Frank Miller’s Dark Knight Returns in Church & State. The joke, if there is a joke, depends on the art looking as much like Smith’s as it is possible for art to look. The town, the bar, and the supporting characters look like characters from a serious swords and sorcery comic book. Cerebus looks like an Aardvark. He has a long nose and tail. At this stage in the proceedings, he is naked, apart from a helmet and some medallions. He is drawn differently from the other characters. He is shaded differently: he moves differently. His eyes are cartoon eyes. Everyone else is a line drawing: he is consistently shaded in grey. Dave Sim must have kept the Letraset company solvent, drawing Cerebus for twenty six years.
Howard the Duck had been a duck in a world of humans—hairless apes, as he called them. But he followed the same narrative logic as Spider-Man and Man Thing and the other characters he bumped into. He was a chap who happened to be shaped like a duck, or a duck who happened to be able to walk like a man. Cerebus is Bugs Bunny on a horse. A cartoon character in a realistic world. (This was before Who Framed Roger Rabbit.)
Sim is closely engaged with the formal possibilities of the comic book medium. He isn’t just telling a story in a series of pictures. The (admittedly fairly slender) joke arises from the construction of a comic book page: the shape of the panels, the sound effects, the lettering. What is not shown is as important as what is shown. We see Cerebus walk to the bar. We see Techot pull Cerebus’s tail. We see a single panel containing no artwork, but a single sound effect: “HACK”. And we see Techot’s hand lying on the bar room floor. The whole force of the scene comes from us readers inferring what the “HACK” sound effect represents.
Sim repeats the gag in the next issue. A Borellian warrior is making a speech about how Cerebus will undoubtedly want to spare the life of a vanquished foe, while a single caption saying STAB appears across the panel. A lot of writers eschew sound effects because of their connection with the infamously camp Batman TV show, but they are part and parcel of Sim’s story telling technique.
STAB! HACK! Comics aren’t just for kids.
At this stage, Sim is pencilling and inking and writing the comic himself. The backgrounds may not be as perfectly rendered as the ones Gerhard would supply from 1984 onwards, but they are very pretty. Sim also lettered his own work. Even at this stage, the lettering is a big part of the story telling. The white on black word “hack” with liquid—presumably blood —dripping from it. The shifts between italics, regular and bold lettering telling us how to read the text. The barman speaks in larger letters; unshaded outlines; with a wobbly splashy speech bubble:
“I can’t serve you here... YOU’RE A....”
and then, in the next panel, small letters dwarfed by a big balloon.
“...guest..and...er....I always serve my guests at their tables.”
The lettering allows us to hear the barman’s voice.
And finally Cerebus speaks. And for all that he is the funny animal in a world of humans, with eyes that meet in the middle and a silly long nose, he doesn’t make a wise crack or a joke. He sounds cool: cooler than Conan ever did.
“I admire your cowardice obese one.”
Comic book Conan’s first words are
“My life is for me to give, not for you to take, and I do not choose to give it.”
Roy Thomas was Stan Lee’s protégé and Conan always sounded a lot like Thor.
It is sometimes said (not least by Sim himself) that the first 25 issues of Cerebus are primitive; that in reading them we are basically watching an amateur teach himself to draw in public. It is true that the art gets tighter and cleverer as the comic goes on: and that it takes Sim some issues to work out what the main character is meant to look like. But a very large amount of what made Cerebus the Aardvark great is already present in these opening pages, if only embryonically. A cartoon character in the real world. Cerebus’s ultra-cool voice. A huge facility with pastiche. A constant clash of registers. The best lettering in the business. And a wish to exploit and push the boundaries of the medium.
Pure comics. 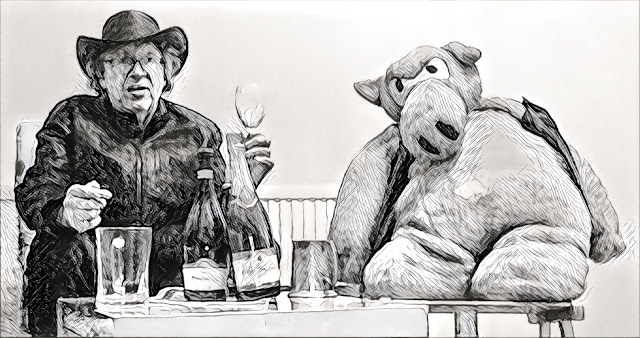 If you enjoyed this essay, please buy me a cup of coffee.