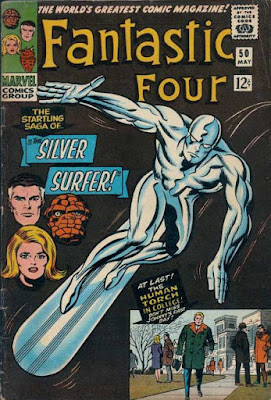 The Silver Surfer was originally depicted as an alien being. He was a scout for Galactus, searching out planets that were fit for his master to consume. He is surprised that humans have to eat food in order to survive: he thinks it is more efficient to simply turn matter into energy. He doesn't understand the meaning of the word 'nobility'. He has never interacted with any other sentient life form; indeed, he seems to be surprised that the planets that Galactus destroys have people on them. 'Never have I beheld a species from such close range. Never have I felt this new sensation. This thing called...pity.' When he discovers that humans have thoughts and emotions of their own, he turns on Galactus. As a result, his master takes away his 'space time' powers and leaves him trapped on Earth.

Jack Kirby created the Silver Surfer without input from Stan Lee. Lee, however, was very impressed with the look-and-feel of the character. It is likely that Stan Lee suggested that Kirby expand the the Silver Surfer from a very minor bit-player in Fantastic Four # 48 to a major supporting role in # 49 and #50. Several of the subsequent stories that feature the now earthbound Surfer – particularly the one where Doctor Doom usurps his cosmic powers – look as if they were Stan's ideas. And there is no doubt at all that Lee created the Surfer's dialogue -- although it is open to question whether this is anything to be very proud of. 'Nay. Tis supremely credible The earth is but a twinkling dot. A paltry pebble in the vastness of space.'

The Silver Surfer went on to star in his own comic. The writer was again Stan Lee, but, as everyone knows the term 'writer' can only be applied to Stan in a rather Pickwickian sense. As he puts it 'There was really no need for me to labour over a fully developed script if Jack was to be the illustrator. All that was necessary was to discuss the basic plot with him, turn him loose, and wait until he brought me the pencilled drawings.' Which is as much as to say: while Lee was writing the captions and the speech balloons Kirby was creating most of the plot. So when Lee decided that John Buscema should draw The Silver Surfer, Kirby was deprived of all input into the development of the character which Stan Lee admits that he had originally created. This seems to have been the beginning of the rift which caused Kirby to leave Marvel, although I imagine Yoko Ono had something to do with it as well.

The Lee-Buscema version of the Silver Surfer is radically different to Kirby's. Far from being an outsider who has to learn about human life from the ground up, this Surfer is a mortal from a futuristic, decadent, but essentially earth like planet named Krypton, sorry, Zenn-La. When Galactus pays the planet a visit, a hippy named Norrin Radd offers to become his herald if he will take Zenn-La off the menu. It's never very clear how this is supposed to benefit Galactus. The idea may be that Radd will find uninhabited planets for him to eat; but this doesn't fit in at all well with Galactus's Lovecraftian claims that humans are simply beneath his notice, or with the Surfer's surprise that the inhabitants of earth are even sentient at all. (And anyway, if Galactus is so dammed powerful and wants a scout, why does he have to wait for a volunteer?) At any rate, he coats Radd in what is technically described as a 'life-preserving silvery substance' and sends him foraging for edible planets.

Subsequent writers have tried rather desperately to make this consistent with the original Fantastic Four story, suggesting that at some point between the flashback sequence in Silver Surfer #1 and his arrival on earth, Galactus took Norrin Radd to Anchorhead and had his memory wiped. No-one is very convinced. John Buscema's art is absolutely gorgeous.

Jack Kirby was well aware of the religious resonances of the character. When Galactus exiles the Surfer to earth, we are supposed to think of God casting his favoured angel out of heaven. (This is particularly pronounced in the 1978 graphic novel version of the story, in which the Surfer spends a full page plummeting to earth.) Of course, 'God' is here the baddy, and 'Lucifer' is the goody, but Kirby revelled in reversals of this kind. Think of the scene in Eternals where the handsome Reject turns out to be a psychotic killer; but the monstrous Karkas is noble and gentle; or the episode of Boys' Ranch where the cherubic 'Angel' is a vicious brat.

But Stan Lee either missed or deliberately expunged Kirby's Luciferian symbolism. He also claims a religious significance for the character, but can't really get beyond "silver equals good equals Jesus." 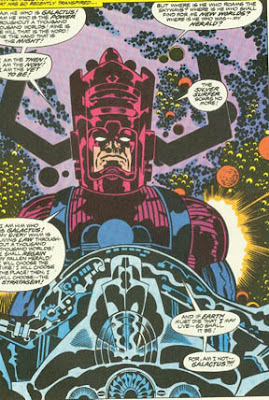 'Somehow or other King Kirby had imbued this new, unique, totally arresting fictional figure with a spiritual quality, a sense of nobility, a feeling of almost religious fervour in his attitude and his demeanour. As I studied that first drawing ,and the ones that soon followed, I immediately realised that there was something very special about this solitary figure upon the high flying space board -- something seemingly mystical, and totally compelling I knew I couldn't give him the sort of dialogue I'd write for any other colourful supporting character in one of our fanciful little epics.'

This isn't true, incidentally: the artwork that Lee must be talking about – the pencils for Fantastic Four #48 -- don't make the Surfer look particularly spiritual or noble : he flies through space, signals to Galactus, and gets punched out by the Thing. And he doesn't get a single word of dialogue. As usual, Stan is thinking of what the character eventually became, and pretending that that is what he had in mind from the beginning. But once the Surfer got his own comic, Lee certainly did depict him as, I quote, 'purity personified'. He speaks entirely in sermons:

'It is as if the human race has been divinely favoured over all who live, and yet in their uncontrollable insanity, in their unforgivable blindness, they seek to destroy this shining jewel, this softly spinning gem, this tiny blessed sphere which men call earth! While trapped upon this world of madness, stand I...'

It turns out that when the Surfer sacrificed himself to save the Earth from Galactus it was only a reprise of his previous offering up of himself for Zenn-La. In case you miss the point Stan makes the Surfer's main adversary a demonic figure called, very subtly, Mephisto, who wants to destroy the Surfer because, er, he does. ('How oft before have I trembled in the presence of such awesome goodness; martyrs all who men themselves in their abysmal madness did forsake....one so noble must not walk freely among those whom Mephisto would exploit, and so I now ordain that he shall die.') Where Kirby's Surfer has been cast down to earth from space, Lee's is merely home-sick for his very unpromising home-world. Kirby's character was an alien outsider who had to learn about the human race. (He was naive and childlike enough to be totally taken in by Doctor Doom.) All Lee's can do is angst about man's inhumanity to man and the girl he left behind. Buscema's art is absolutely gorgeous.

Superhero costumes are intrinsically unrealistic, but very easy to draw. They are pretty much nude figures overlaid with colours and insignia – you never saw a crease in Spider-Man's suit, not even when Ditko was drawing it. The Surfer takes this to the Nth degree: he is neither flesh nor spandex but silver all over. Kirby occasionally sketched a line along his waist and maybe diagonals at the tops of his thighs, but he's essentially featureless. In cheap four colour printing, 'silver' is pretty much the same as 'white', so the Surfer is a blank white nude: a plain sheet of paper waiting to be drawn on. In Buscema's art, the lines on the Surfer's middle are much more pronounced: he clearly intends us to think that the Surfer is wearing swimming trunks or shorts. This makes him look rather like an Action Man. The same Comics Code that would allow 'Mephisto' but not 'Satan' seems to have had a problem with cosmic skinny-dipping.

The superior Kirby version of the Surfer is an alien, very probably created out of thin air by Galactus. Possibly, like his board, he's made of energy and sometimes takes on a solid form. He

doesn't have digestive organs, so there is no reason to think that he is biologically human in any other respect. Although he is impressed by Alicia's nobility, there is never the slightest hint that he is sexually attracted to her -- he simply doesn't understand Ben's jealousy. And he goes naked.

The inferior Stan Lee version has flesh, bones and all things which pertaineth to man's nature: they just happen to be coated with a life-preserving silvery substance. He has emotions and a human lover, and he always keeps his knickers on.

So the answer to the pressing question 'Does the Silver Surfer have a willy?' is 'Up to Fantastic Four # 70, no; after Silver Surfer #1, yes.'