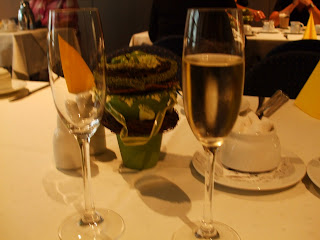 O.K. So I have now seen Bob Dylan perform live, heard Parsifal at Bayreuth and met Tom Baker. I can therefore die happy. (For the avoidance of doubt, I am not intending to, at any rate not any time soon, but it is nice to know that if the need arose I could do so.)

I am on Munich station, or in fact in a cafe near Munich station. I am drinking the cafe's famous cappuccino although I must admit that I had never heard of it before. (It is quite like other, less famous cappucino that I have drunk, only without chocolate sprinkles.) Check out from the hotel was 12.00, and what with breakfast and having had a more than usual amount of beer in the hotel bar last night (having, obviously, observed a total fast before Parsifal, unless you count a bratwurst, a mocha, and a mango ice cream)  didn't actually do anything before catching the train. The hairybuzzer doesn't  fly away until 9.30 but allowing for 60 minutes to get to the air port and too much time to check in, I've only got a couple of hours which doesn't seem long enough to venture forth on a bus or a metro. So you have to imagine a German visitor who has come though London but not actually gone more than a hundred feet from Kings Cross station.

This has been true of the week in general: you have to remember that the operas themselves run from 4PM (doors locked, music starts) to 10.30 or so (sixteenth or seventeenth ovation), and by the time you've got changed, availed yourself of the pre-theatre buffet and stood around outside the theatre admiring everyone's clothes, "going to the opera" takes from about 2PM to 11PM – which doesn't leave much space for visiting typewriter factories.

Which reminds me: clothes. About 50% of the men are in dinner jackets, but the other 50% are in everything you can think of: ordinary jeans and teeshirts; a bright orange suit; one man in full highland dress; one man in German peasant costume, if not actually liederhosen. Women in every kind of ball gown; I don't know about fasting, but it seems to be positively immoral to go and see Parsifal displaying quite so much of one's boobies. A few people tried resolutely not to clap after act one (there were non curtain calls, mercifully) but that tradition (the tradition of not applauding Parsifal because it isn't an entertainment but a stage-consecration-festival-work) seem to have died out.

That's the big deal, of course. Parsifal is a festival play for the consecration of the Stage. The Stage being here, Bayreuth. While I think the Ring is still my favourite opera, there is something very special and unique about seeing this opera here. (Here in Bayreuth, I mean, not here in the very famous capuccino cafe on Munich station.)

I think that it is fair to say that Parsifal has created a Sensation.

Act II finishes with Kundry on a raised dias, ranting wildly; and Klingsor (in silk stockings, suspenders, and wings) declaiming from the balcony, at which point huge swastikas are rolled down from the ceiling, and a squad of men in S.S uniform march across the stage. (I mean to say; the scene last night in which Elizabeth arguably died by arguably walking into what was arguably a gas chamber was understandably regarded by some as being a little near the proverbial knuckle, but SWASTIKAS and NAZI UNIFORMS at BAYREUYTH. I didn't know that was even legal.) And then a little boy is raised up at the centre stage, on a raising and lowering dias which has probably represented the Holy Grail throughout. Parisfal has been represented, thoughout, as both a small child in a sailor suit and the adult opera singer (also mainly in a sailor suit). The boy throws the spear at Parsifal; Parsifal catches it. All though the production, there has been a mound of earth at the front of the stage, and the boy-Parsifal has been building something which could be a wall with toy bricks on it. I would totally have spotted that this was Wagner's grave if the man who bought the spare ticket hadn't pointed this out to be. So man-Parsifal, holding the spear, point in menacingly at the toy brick structure, where upon all the swastikas fall down, and the rest of the set, collapse. It was pretty strong stuff for me; I can't imagine what it must have felt like to the Germans in the audience.

In the Arvena Kongress bar, opinion seemed to be pretty evenly split -- between the ones who thought that it was sensational and beautiful and the ones who wanted something that was more recognizably Parsifal. My feeling is that these kinds of productions – conceptual productions where what is going on on the stage is suggested by the music, but isn't necessarily telling the story of the libretto – have got to be both very interesting and brilliantly done before they work. Lohengrin and Tannhäuser just basically weren't good enough to get away with their ideas. (Lohegrin was pretty but incoherent; Tannhäuser was clever, but seemed to have attached a different story to the libretto more or less arbitrarily.)

Parsifal actually stays fairly close to the story: we have two grail ceremonies; the healing of Amfortas; the spear; and the whole thing is very much about Redemption. But it turns out that the story is really about the redemption and purification of Germany in general and Wagner's family after certain bad choices they made in the 1930s. It also turns out that the story is at least mostly a dream; Parsifal is the little boy who we first see playing with a toy bow and arrow while his mother is dying, in a 19th century bedroom in what is very probably House Wahfried. It appears that the rest of the production is the boys dream; Kundry is a dream projection of his mother; Gurmenez is very probably a dream projection of his father; and Parsifal, Amfortas, Klingsor and Titurel are all (if I have read this right) dream projections of the boy. Oh, and everyone has wings. I didn't get the hang of that. But characters are definitely fluid. There is a striking moment in Act I where the boy in the sailer suit is put into Amfortas bath and comes out as a very old man. (This happens in passing, on one side of the stage.)

Presumably, at some point in the development stage, all the producers get to write a word on a piece of paper and put it into a hat, and which ever word they pick out has to feature in every production at Bayreuth. This year the word was BABY. So we had the embryo in Lohengrin (signifying rebirth) Venus' child in Tannhäuser (signifying rebirth). The Grail ceremony involved Parsifal making love to Kundry and Kundry being delivered of a baby. The elevation of the grail is the baby being passed around the grail knights (who are Victorian German ladies and gentlemen, with wings, obviously.) The baby is then circumcised (at which point Amfortas' wound starts to hurt again), a cloth is placed over him (the baby), and he is turned into eucharistic bread and wine. Which a lot of solidiers with points on their helmets consume before going off to, presumably, the first world war. I have no idea. But the stage imagery was so beautiful and striking and well staged and matching the music that understanding it would almost seem impertinent.

Act II takes us through the first and second world wars (the flower maidens are 1920s dancers out of Cabaret, the one rather obvious image in the whole evening) climaxing with Parsifal taking the magic spear and bringing down Nazism with it. I think that's three genuine coupes de theatres in two acts, actually: the dying mother in the prelude; the bizare cannibalistic grail ceremony; and the Nazi climax to Act II. But none of that really prepared us for Act III.

Just let's run through the main ideas in the last act. I am probably forgetting sixteen or seventeen of them:

1: We're now looking at a stage within a stage; there's a mini Festspielhaus proscenium arch lying back from the front of the real stage, and its on the "model" stage that all the action now happens.

3: Granted that it's taking place in this industrial landscape on a miniature stage the opening of Act III of Parsifal is done almost completely straight, and very powerfully: Parsifal, now old and beardy and looking much like Amfortas comes in in armour, Kundry removes his armour. The spear opens up a fountain at the center of the stage (where the grail was in Act I, I think), Kundry bathes his feet and dries them with her hair.

4: The Good Friday magic. A lot of poor people presumably refugees, walk out onto the stage (in front of the "model" theatre. The "model" theatre light up with bright footlights. The poor people are brought onto the "model" stage and given water from Parsifal's fountain. And then (there is a little jiggery pokery with house lights coming up and stage lights going down) a huge mirror rotates into the middle of the stage and, we see the crowded festspielhaus audirorium reflected back at us. Just the most fantastic image I've ever seen on the live stage; and in combination with the Good Friday music, completeley overwhelming. One imagines the producers brainstorming idea, and one of them saying "follow that"....

5: ....So one of the does.The final grail ceremony....we're back on the "model" stage, but the ruined post-war Germany has been replaced by....a straight, realistic, modern depiction of the German Parliament, with the chorus of knights as MPs waving their order papers, and Amfortas addressing Tirturel's coffin wrapped in the German flag; Parsifal wafting the spear over the heads of the MPs, and then saying "Open the shrine..."

6: …."the shrine" is, of course, Wagner's grave which has been at the front of the stage from the beginning; and when it is open the little boy in the sailor suit emerges, to be joined by Mum and Dad in a sort of holy family tableau. A huge luminous globe is lowered from the ceiling. A dove of peace (which could just possible be the German eagle, and therefore the swan which Parsifal killed) hovers above it. The end.

There were things in the production that I didn't understand and things that I thought didn't quite work (I wasn't sure about having Parsifal in his white robes and holy spear addressing the modern German MPs) but there was a succession of quite fantastic imagery. I think that I "got" what was being said: "A child is psychologically wounded; that wound creates a nightmare which is 20th century German history; Amfortas, Tituriel, Klingsor and Parsifal are all representation in different ways of that basic wound; Parsifal's quest is the quest to heal that psychological wound and its political consequences; when that happens, the starting point – peace in the world and a happy family – is restored. Oh, and there are wings as well."

There's apparently already been a book written to elucidate the production. I would very much like to see it again (its being shown in cinemas, I think) to try to work out all of what is going on, and unlike The One With The Rats I am quite sure that it will all turn out to have hung together.

Its now about six o clock and it properly makes sense to head to the airport. Hopefully see you tomorrow or the next day. 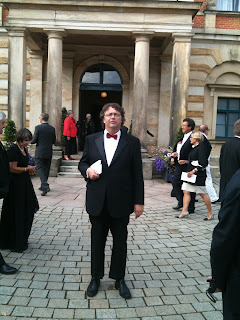