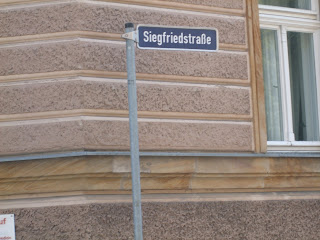 I have been imagining you walking around Bayreuth – I have a pretty good picture of it in my head. I can visualise the beer, sausages and coffee having eaten and drunk many of them in various German towns.  I have had a pretty good go at imagining the first three operas – probably wholly wrongly. This last description leaves me at a loss but wishing so very much I had been there with you last night.

I first saw Parsifal when I was 14 having read the summary in the opera plots book. I couldn’t follow the words having only studied German for two terms at the time but I remember being left with the feeling I had witnessed something that mattered. Later I got a boxed set of the records – sides 3 and 10 were my favourites (the two grail ceremonies). By this time I could understand the words (courtesy of dual language librettos) but I’m not sure it took me much further. I just wanted to listen again and again. Who was it who said that poetry can communicate before it is understood?

Come to dinner tomorrow and tell me more.

T.S Eliot said poetry could communicate before it is understood. I think he was just covering his back after writing the Wasteland. (Question in the Guardian Quiz today: which quotation from Our Mutual Friend was nearly used as the title of The Wasteland?) The funny thing is I do remember reading the Wasteland in the sixth form, not understanding it, but liking it very much indeed. If anything, I think I liked it less after I studied it at college and had more idea of what he was getting at. But reading something, not understanding, and liking the fact that you don't understand it may not be quite fair to the poet, who probably intended you to get it to some degree. Obviously (obviously!) the Wasteland is a kind of distant cousin of Parsifal, being vaguely about the quest for the Holy Grail, or at any rate, being vaguely based on a theory about what the quest for the Holy Grail is all about. But it occurs to me that there was something Waste Land ish -- modernist or post modernist -- about last nights Parsifal: a lot of image that were quotes and references to other things, that didn't really make sequential sense, but created an overall emotional effect. "These fragment have I sured against my ruin" as the fellow said.  (You remember A.N Wilson's "interview" with the Queen Mother? "This rather lugubrious man in a suit, and he read a poem ... I think it was called The Desert....At first the girls got the giggles and then I did and then even the King ... Such a gloomy man, looked as though he worked in a bank.")

Trust that your imagining of me walking around Bayreuth doesn't focus too heavily on me realising I don't know which turning to take 5 minutes from the hotel and walking around in circles for 20 minutes. Or being asked directions by an American tourist, admitting that I can't help him, but being congratulated on my excellent command of English.

Yes, I particularly missed you at Parsifal because I know you liked it so much when you were younger and the production was so....special. I probably didn't describe it very well: imagine the plot of Parsifal pretty much as per the libretto, but with each scene representing a period in German history -- pre-War (Act I), First and Second World War (Act II), post-war and modern era (Act III) with the grail castle, I suppose representing German society -- getting corrupted and healed; wrapped in a prologue which suggests the whole thing is a dream. Now I've thought about it, I think that was what the wings were about: the child was dreaming that his dead mother was an angel in heaven. I was also a bit obtuse to say that the Grail was "a baby": obviously since the woman is Kundry/Parisfal's mother, the baby is Parsifal himself. So Parsifal is the Grail, so "the redeemer redeemed" is him overcoming his primal Oedipal wound. Kind of thing.

Parsifal itself is such a complex opera -- the actual plot takes some grasping, before you even start to think about all the philosophy in the libretto. The really strange thing is that the music is so sensual, emotional -- you could almost say syruppy in places -- but that it's carrying all these heavy ideas about renunciation and lack of attachment and oblivion and stuff. (So you could reasonably say that the producer oughtn't to have been piling three more levels of symbolism on top of it.) I can't remember when I first heard the opera, but I was crazy about King Arthur and grail mythology when  I was a teenager, so I was ready for the basic plot about healing the Grail King. Not that T.H White and Malory have much to do with the German version of the story, and Wagner's version doesn't have much to do with that...but the idea of the Grail being this super mysterious ceremony, and that someone had to heal the King to heal the land was very much in my head, and music seemed and seems to capture that idea. (I was flirting with Bob Dylan a few months ago, but I am quite sure that it's the opening of Parisfal that contains the meaning of life, not Visions of Johanna after all :))

Actually, I wonder if that's a justification for these conceptual productions: it's the music that says what Wagner wants to say; and the libretto is really just a commentary on that, some of it being hard to understand and some of it being (arguably) tosh; so it's all right for a person who isn't Wagner to provide pictures which present a different commentary on the music, provided you don't change the music?

Apart from a scary moment when the Munich ticket machine refused to talk to either of my credit cards, journey back last night was hitch free. (12 noon, leave hotel. Consume coffee on Bayreuth station, catch 1PM train to Nuremburg; 2.30 ish train from Nuremburg to Munich, consume coffee near Munich station from about 4PM to 6PM; Metro to Munich airport; much checking in off baggage and tickets at Munich airport from 7ish to 8ish, and one last cup of coffee before getting on airybuzzer around 9PM, and then caught a coach from London to Bristol. Back in Stokes croft by about 3AM.)

Haven't been able to bring myself to listen to any other music either on planes and coaches or back home: don't want to listen to a different version of Parsifal and Tristan and don't quite want to listen to anything else either. Was almost tempted to go and listen to the man singing Buddy Holly covers in the Cat and Wheel last night as a means of re-grounding myself.

Ah well, only three months and we can go to the Ring in London. ("Is Wagner actually a man? Is he not rather a disease?)

"He do the police in different voices" 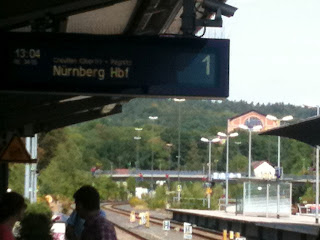 "You remember A.N Wilson's "interview" with the Queen Mother?" No, but I very evidently ought to: will loook it up. & Thanks for visiting The Opera: next best thing to being there oneself.

Just a thank you for this series of posts. I have nothing intelligent to add, but wanted to let you know that I enjoyed them very much, and they leave me feeling even more strongly than before that I really ought to see a Wagner opera.

(The CAPCHAs are now close to impossible. I fear I may comment only very rarely due to the sheer difficulty.)