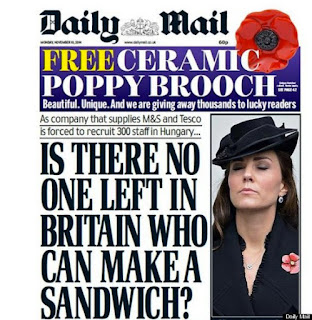 Bettridge's first law states that when a newspaper headline poses a question (Does Prince Charles have cancer? Can acupuncture make you a better lover?) the answer is invariably "no".

Betterdige's second law, incidentally, states that everything before the "but" is bollocks.

The Daily Mail ran a particularly Bettridgian headline on its front page at the end of last year.

"Is this proof that Jesus married and had two sons?"

"are convinced that they've uncovered a missing fifth gospel — to add to the four gospels which tell the story of the life of Christ and are said to have been written by the evangelists Matthew, Mark, Luke and John in the 1st century AD"

I would have thought that "Q" (the hypothetical source of the bits that Matthew and Luke have in common) was the lost fifth gospel? And the "gospel" of Thomas, the collection of wise sayings which make Jesus sound like Yoda: some people think that contains original J.C material that the big four left out. I would have thought that was the fifth gospel as well. And isn't there a clever theory that the gospel of Peter contains a version of the Resurrection-story that predates the Biblical one? So wouldn't that be the fifth Gospel? Not to mention the unauthorized prequel to Matthew: only historical fiction, of course, but people believed it was real for centuries and it was a massive influence on Christian art and literature. Surely that must be the fifth gospel?

You might as well say that Yoko Ono was the fifth Beatle.

The person who has uncovered this, er, ninth Gospel is one Simcha Jacobovici. Readers may remember that he has previously uncovered the authentic tomb of Jesus in Jerusalem, the location of Atlantis and nails and wood from the True Cross. It can only be a matter of time before he uncovers the Ark of the Covenant and is melted by Nazis.

What he has in fact uncovered is a document in the British Library called Joseph and Aseneth. Not that he needed to go as far as the British Library to uncover it. I uncovered it myself on the internet this morning. It's a fan-fic about Joseph (the fella with the coat of many colours, nor Jesus' step-dad). You remember, of course, that after Joseph came out of prison and was put in charge of corn-rationing, he married an Egyptian wife, and had two Egyptian sons, who each got half a tribe of Israel named after them? This is her story.

Bible expositors sometimes play a game whereby characters in the Old Testament foreshadow characters in the New, and characters in the New Testament re-enact key events in the Old. If you've ever sung "oh come thou branch of Jesse draw / the quarry from the lions jaw" you know the kind of thing. David the shepherd boy rescued a sheep from a lion; that foreshadows Jesus rescuing the human race from the devil. That's a particularly good one because Son of David is a title given to Jesus. King Darius taking the stone away from the lions' den and finding that Daniel has miraculously closed the lions' mouths foreshadows the disciples going to the Tomb on Sunday morning and finding that Jesus has de-fanged Death. It doesn't follow that Jesus was deported to Babylon, or that he decoded mysterious graffiti for the King. The game is about finding likenesses, not one-to-one correspondences. It's a good game. Jesus played it himself on occasion, when he said that his death would be like Jonah being swallowed by a whale. We're not intended to infer that Jesus was a very reluctant prophet, keeps getting kicked off boats, or is planning to run away to Tarshish.

So: it would not be very surprising if a Genesis fan-fic written by a Christian treated the patriarch, Joseph, as a type of Christ. And the idea that the Church is the Bride of Christ is very well established, as every Sunday School boy knows:

The church's one foundation is Jesus Christ her Lord
She is his new creation by water and the word
From heaven he came and sought her
To be his holy bride
With his own blood he bought her
And for her love he died.

The Song of Solomon is routinely read by Christians as a love song between Jesus and the Church. My Bible has a helpful running commentary which glosses things like:

As a piece of pomegranate are thy temples within thy locks"

the Church professeth her love for Christ; Christ shareth the graces of the Church.

Terrible as an army with banners
we are the Church of Christ
Making known to principalities and powers
mysteries that have been hidden in God.

I'm not particularly proud, but we did. But those words didn't originally apply to the church: they applied to Solomon's girlfriend.

Thou are beautiful, oh my love, as Tirzah, comely as Jerusalem, terrible as an army with banners. Turn away thine eyes from me; thy hair is as a flock of goats that appear from Gilead.

But according to the rules of the game, Mary Magdalene is also like the Church. She is the one who first told the disciples that Jesus had come back to life, after all. Announcing the Resurrection is a pretty good job description for the Church.

So the "proof" that Jesus was married and had two sons appears to be roughly as follows:

Anything which is said of Joseph and Aseneth (they were married, they had two sons, Pharaoh performed the wedding, someone tried to assassinate the sons, Aseneth was a former pagan priestess) must be historically true of Jesus and Mary Magdalene.

This seems to be so tenuous as to leave the argument almost exactly where it was. It doesn't help that this is the sort of code-book where you are allowed to say things like "Magdalene sounds like Magdela; Magdela may mean "tower"; Aseneth lived in a tower; so Mary Magdalene must have been Aseneth"; and "Aseneth had seven virgins attending her; Mary Magdalene had seven demons cast out of her. Seven demons must represent the seven virgins." If anything can be a symbol of anything, then you can prove anything about anything. The answer to the rhetorical question is, as ever, "no".

We are told that bachelor rabbis were the exception rather than the rule, so that if Jesus had been a bachelor, one of the four Gospels would have said so. But we know the Essenes, contemporaries of Jesus who lived near the Dead Sea and spent their time composing scrolls, sometimes took vows of celibacy. Some people think their beliefs were quite like those of the early Christians in some respects. And anyway, it wouldn't be terribly controversial to suggest that Jesus probably was fairly exceptional.

What about when Jesus himself talks about marriage (which he doesn't, not very much). Jesus says that absolute life long fidelity to one woman is so difficult that some men will have to take the easier path of celibacy. He doesn't say "You have to stay with one woman, forever, to the exclusion of all others — as I have chosen to do." But neither does he say "It is better not marry, but although this is possible for me, it isn't possible for everybody."

Where is Mrs Jesus? Minor characters are always popping up in the Gospels — people with names and very little else. Simon of Cyrene had children called Alexander and Rufus, but we don't know anything else above them. A lady called Mary the wife of Clopas witnesses the crucifixion, but who Clopas was we have no idea. We know that St Peter was a married man or a widower (quite an embarrassment if you are planning to become the first Pope), but nothing about his wife.  If there was a Mrs Jesus, why does no mention of her ever slip through the net?

The Church venerated the Mother of God as a semi-divine figure almost from the beginning. Wouldn't they have venerated the Spouse of God and the Grandson of God had there been the slightest hint that such people existed? We are told that Jesus mother and brothers don't approve of his ministry; but we never hear tell of Jesus wife and sons. We are told in passing that Jesus mother was part of the first Christian church in Jerusalem; but there is no mention of his wife. Jesus brother definitely became a leader in the early Christian movement: his brother, not his son. There even seem to have been people, as late as the third and fourth centuries, who identified as Jesus' relatives. There was a special word for them, desposyni. But what they claimed to be were Jesus great-great-great nephews by his brother Judas. (No, not that Judas. A different Judas.)

Where are all the stories of tall men hanging out in pubs keeping very quiet about the fact that they are the dead King's secret descendant? The idea doesn't seem to have occurred to anyone before three English writers fell victim to a French practical joke about 30 years ago. (One of the three was a TV writer who had written for Doctor Who and invented the Yeti, and therefore the Brigadier. This is not strictly relevant, but it is one of my favorite facts.)

Christians don't think that sex is a bad, although they think that some people ought to abstain from it. Paul didn't insist on celibacy, although he recommended it. Every Jewish writer I look at tells me that an unmarried Rabbi would be an anomaly. Whatever view you take of the Incarnation, I don't think anyone believes that Jesus was Son of God in any heritable sense. So why shouldn't Jesus have been married?

I suppose, for the same reason that priests and monks and nuns and in the olden days academics and school-masters didn't marry. Because you can't put your wife and your family first if you have sworn yourself to a higher calling. Particularly if that calling involves getting crucified. Isn't there a huge problem if Jesus is thought of as not merely laying down his own life, but depriving little Ephraim and Manasseh of their daddy?

I don't know if Jesus had a wife. I think it is perfectly possible that he did. But if he did, then I am pretty certain that we don't, and can't, know anything about her. Because no-one recorded it, any more than they recorded the name of Peter's wife. The process of going through the New Testament, picking on minor characters, deciding that they must have been Mrs Jesus, and then making up back stories for them is simply a game. It's only one step up from deciding that Sherlock must have been doing it with Irene because she's the only prominent lady in the stories.

A long time ago I wrote down everything I know about Religion and put it in a book, It would be lovely if you read it.