Did Jesus Have a Cat? 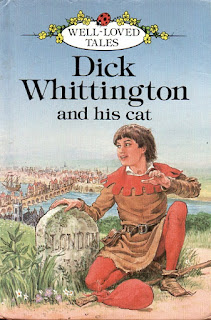 Last Christmas, I went to see the pantomime of Dick Whittington and His Cat at the Bristol Hippodrome. And very funny it was too: I even found myself warming to Pudsy the Dancing Dog. Panto is almost the only place you still get vaudevillian silliness in its purest form.

After the show, one of the children I was with asked me if Dick Whittington was a real person. And do you know, in best Thought For The Day style, that made me stop and think.

Was Dick Whittington a real person? It depends what you mean by "real".

I suppose people from Foreign do not know the story of Dick Whittington? They probably don't know what a pantomime is, either, but we're not going through that all over again. It's a rags to riches story. A poor boy walks all the way to London with only his cat for company because he thinks the streets are literally paved with gold. When this turns out not to be true, he takes a job in Mr Fitzwarren's shop and falls in love with his daughter, Alice. Alas! He is wrongly accused of stealing, beaten by the cook, and runs away. But as he sits down on Highgate milestone for a rest, he seems to hear Bow Bell chiming "Turn Again Whittington / Thou worthy citizen / Turn again Whittington / Lord Mayor of London." He runs back to the shop, and ends up traveling with the Fitzwarrens on a voyage to Morocco. The Emperor's palace is overrun by rats, which Dick's pet cat kills. The Emperor has never seen a cat before, and buys the animal for a vast sum of money. Fortune made; happily ever after. A few years later he does indeed become mayor.

As a matter of fact, there was a Mayor of London named Richard Whittington  at the turn of the fifteenth century. He entirely fails to appear in any of Shakespeare's history plays, even though he had dealings with Richard II, both parts of Henry IV, and Henry V. (A different Mayor of London appears in Richard III, disappointingly.) And he did marry someone called Alice Fitzwarren. Londoners can point out the very milestone where he stopped for a breather; but you couldn't possibly hear Bow Bell from there. And you couldn't walk from the City of London to Highgate and back in one night. And the real Whittington was never that poor, although he was a second son and sent to London to learn a trade.

Is the story of Dick Wittington true? Well, so far as we know, he was never thrashed by a cook, never traveled to Morocco, and never did a song and dance routine with the winner of Britain's Got Talent.

But if, in two thousand years time, the fairy tale version of Dick Whittington and his cat survived, it would tell any surviving humans a surprising amount about late medieval London. It would tell them that there was such an office as Mayor, that one such Mayor was called Whittington that his wife was called Alice, that there was a church called Bow, that churches had chiming clocks, that there were such things as milestones; that people kept cats as pets.

On the other hand, if you were working from the Pantomime and had nothing else to go on, the main thing you would take away was that there were good fairies and wicked witches in London. Or that everyone in London believed that there were. Or else you would very reasonably say that since the story was full of obvious nonsense about good fairies and talking bells, the whole idea that there was ever such a beast as a "cat" needs to be taken with a pretty huge pinch of salt.

Did Richard Whittington even own a cat? There is no historical evidence that he did. On the other hand, there is no special reason to suppose that he didn't. People in fifteenth century England sometimes did. And isn't the existence of the fairy tale a pretty massive piece of evidence in it's own right? Why would anyone attach a version of the Puss in Boots story to the Mayor unless "everyone knew" he was a cat person? But by the same argument, other things in the story could be true. Cooks were sometimes cruel to kitchen-lads. People did sometimes go on trading voyages.

But this doesn't really help. My Ladybird book had a contemporary painting of the adult Whittington on the last page. But "Dick Whittington" is the young man with the cat; his possessions on a stick on his back, sitting on Highgate Hill listening to the bells chiming. A scene they recreated rather charmingly in the panto. And that Whittington is "only a story".

If I ask "Was Robin Hood a real person?" I am not asking "Were there archers?" If I ask "Was Davey Crockett a real person?" I am not asking "Were their backwoodsmen?" A philosopher could doubtless find ways of making the question harder. If one of the defining feature of a Davey Crockett is that he kilt him a b'ar when he was only three and if that is plainly impossible, then there are no such things as Davey Crocketts. And certainly, once you have defined George Washington as Cherry Tree Choppy Down Guy, then you could reasonably say that "George Washington" never existed.

If the adventures of Errol Flynn or Richard Greene are not based on the doings of any known outlaw; and if no-one has ever tracked down an outlaw called Robert or Robin anywhere near Sherwood or Huntingdon or Locksley at anything like the correct time, then I think we are allowed to say "No; Robin Hood did not really exist: he's only a story."

On the other hand, if we were to find that there really was an American soldier whose career — backwoods man; Indian fighter; Senator; Alamo — broadly matches the career of the fellow in the ballad, then I think we would say "Yes: Davey Crockett really existed. He's a historical character." Even if he never actually wore one of those hats.

A long time ago I wrote down everything I know about Religion and put it in a book, It would be lovely if you read it.