People have argued for many years about whether women can Morris dance. Since they do, you’d think that would have finished the argument.
Sid Kipper 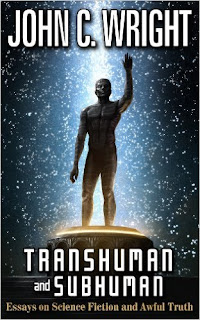 Lastly and reluctantly we turn to the Hugo nominated J.C Wright’s sexual politics.

We need to maintain a certain sense of proportion here. The Hugo-nominated Wright is nowhere near as loopy as the multiple Eisner and Kirby award winning Dave Sim, and nowhere near as toxic as fellow Hugo-nominee Vox Day. It is necessary to separate content from presentation. The substantive content is merely reactionary or old fashioned. The presentation, as ever,  is deranged.

EDIT: What follows is an attempt to "steelman" Wright's arguments -- to produce the best version of his case that I can, and criticize that. I have talked about the style and presentation of his arguments in the last two essays.

Hugo-nominee Wright thinks that boys are different from girls. He thinks that men are outward looking and task-orientated, and women are concerned with feelings, motives, and internal states. A man may think that the sergeant is an asshole, but he still salutes him; he may think that the sergeant’s orders are stupid, but he still obeys them. What matters is that the new trench is dug before sundown, not how everyone feels about it. A woman, on the other hand, doesn’t want you to do the dishes; she wants you to want to do the dishes. She doesn’t want you to tidy your room, she wants you to be happy about tidying your room. A man barks out an instruction to a subordinate; a woman creates an atmosphere in which someone will volunteer. Dad makes the children do the right thing by punishing them when they do the wrong thing; Mum encourages the children to do the right thing by helping them see that doing the wrong thing makes other people sad. Neither outlook is wrong: soldiers really do need to be task-orientated if we are going to win wars; mothers really do need to worry about people’s feelings if there are going be happy families and harmonious neighborhoods.

The Hugo nominated Wright has the pulp novelists eye for the broad delineation of character. (No-one is interested in the subtle delineation of character apart from girls and literati, and they don’t count.) And as broad generalizations go, this one is quite funny and pretty well observed and not blatantly untrue. If you accept that man is synonymous with soldier and that woman is synonymous with mother, it works passably well. The minute it occurs to you that a man might very well be house-painter, a librarian, or a jazz violinist and a woman might very well be… well, come to think of it, a house-painter, a librarian or a jazz violinist it all falls apart. You could, I suppose, say that there is a distinctly male way of making music (“we’re playing this number like this and if you don’t like it go and join a different band”) and a distinctly female way of making music (”Let’s all jam together until we get a sound that everyone likes”) but it is not true that (I’m sorry) musicians with willies will necessarily prefer the first method, and (I’m sorry) musicians with tits will necessarily prefer the second. Call the direct approach masculine and the indirect approach feminine if you must; but there is no necessary connection between having a male body shape and a masculine approach to digging ditches. It may be that people with willies are more likely be have masculine personalities, but “more likely” is not the same as natural law. I had a lady teacher who used to threaten to hit boys backsides with a gym-shoe if they were bad; and I had a man teacher whose preferred approach to discipline was to raise one eyebrow and say "Are you quite sure that’s what you want to do, laddie?"

"Ah, but that’s because the female teacher was trying to be a man, and the male teacher had been feminized by post-structuralists. If she’d been a true woman, she’d have used persuasion. If he’d been a real man, he’d have punished you. No true Scotsman puts sugar on his porridge."

The Hugo-nominated Wright accuses The Left of being “nominalists” who believe that words have the power to mold thought. The whole of Marxism turns out to be about thinking up nasty names like capitalism for obviously nice things like free markets. But Wright himself subscribes to an extreme etymological determinacy in which words have a “real” or “original” meanings. Most of us use the word sex to refer to body shape and reserve the word gender to refer to masculine and feminine social roles. (We understand what is meant when someone talks about a male or female sockets although some of us are still childish enough to giggle about it.) Wright objects to the use of gender in this sense because he thinks that it “really” means the distinction between masculine and feminine nouns in languages like French. He also thinks that homophobia is “a noise word whose meaning evaporates on closer inspection”. (He doesn’t say whether he’s in the “ha-ha it really means being scared of things that are the same” or “ha-ha we aren’t scared of homos we just think they are going to hell” camp.) And he pretends not to understand what is meant by “sexism”:

Few stupider words exist in the modern lexicon. One would think “sexism” would be rule by copulation, an inventive form of government yet to be tried?

This seems to be willful stupidity. Thatcherism doesn’t mean rule by Thatchers any more than cannibalism means rule by cannibals. I agree that, over the last 50 years, there has been a linguistic drift so that racialism, which meant a system of beliefs based on racial superiority was shorted to racism and racism came to mean simply the belief in racial superiority. I was taught that South Africa was racialist but Mr Smith down the pub who thought that black people smelled funny was a racist. But few people ever bothered with that distinction. (In 1968 the white lady invented by Enoch Powell said that her black neighbors kept accusing her of being a racialist.) It’s true that sexist is a relatively recent coinage (since about 1970) and that it was specifically made up to “rhyme” with racism. But I should have thought that sex still primarily meant the anatomical difference between boys and girls. ("What sex is that puppy” “Oh, she’s a female”). Again, I was taught that sex was rather a vulgar neologism for what boys and girls do in bed with the lights out. In The Rotters Club (a novel set in the 1970s) schoolboys still say things like “Do you think he has had sexual intercourse with her?” So if racism means prejudice on the grounds of race; paying attention to someones race when it doesn’t make any difference, sexism means prejudice on the grounds of sex; paying attention to someone’s sex when it doesn’t make any difference.

Rule by copulation would be something like erotocracy, wouldn’t it?

Twenty two pages into a sixty page rant, the crazy kicks in. Up to this point he has been describing, interestingly and even wittily, how “men” (i.e the military) do stuff differently from “women” (i.e the domestic).

By the way, gentlemen, this is why women talk more than men and talk about more trivial things. The act of talking is attempting to form a bond and open a channel of communication, which the woman can use to deduce information vital to her approach about your personality and moods and your character. She is trying to see behind the mask all too many of us wear as a matter of convenience. She is trying to cure us of our hidden pain.

I see your point. I think you could get an amusing romantic comedy out of illustrating it.

By the way, ladies, this is why we guys don’t talk about important things and never open up and share our feelings. We don’t have any, not what you call feelings. We have tactics and goals. Anything outside the goal is a distraction. We do not care about how we ‘feel.’ Feelings pass. Pain is endured, not cured.

Did you get that bit?

Or at any rate people with willies don’t care about their feelings.

Or, at best people with willies and people with tits mean something entirely different by “feelings”.

Once you’ve said that, a lot of the other shit falls into place.

By Science Fiction the Hugo-nominated Wright appears to mean stories in which competent men solve problems; although he also likes swashbuckling tales of action. John Carter and Hari Seldon both equally solve a problem head on, the one with a sword, the other by inventing Wikipedia twenty thousand years too late.

It’s not a barking mad definition. Asimov thought that science fiction was about stuff and that putting characterization into it was a distraction from all the stuff. C.S. Lewis thought that you have no business setting your story in the future if stuff is going to happen which could just as well have happened in the present. He got very cross with a writer named Kris Neville for allowing a human interest story to intrude into a narrative about settlers on Mars. (The human interest story was about a tart with a heart. Just saying.)

So why are there increasingly strong female characters in science fiction? Because feminists.

Well, why are science fiction writers increasingly doing what the feminists want? Because political correctness.

And why are these books often popular and sometimes awarded Hugos? Because political correctness, again.

But why does Political Correctness even care what happens in science fiction books? Because The Left is a cult, which has only one belief: that it, The Left, should control everything. They don’t put feminist propaganda into science fiction because they want to make science fiction readers feminists; they pretend that they support feminism because it gives them a pretext to take control of the content of science fiction.

It is all very logical.

In fact, it is so logical that one is very tempted to think that the Hugo-nominated Wright retrofitted his premises (people with willies are goal-orientated; science fiction is about achieving goals) in order to arrive at the conclusion he wanted.

But none of it has any point of connection with the real world.

In the end, it's the most circular of circular arguments. "SF’s for boys", they bellow til we’re deaf / "But girls read this" / "Well then, it’s not SF."

Yet I wouldn't spread such a rumor around
Because one organizes the other
And some times the most lost and wasted
Attract the most balanced and sane
And the wild and the reckless take up
With the clocked and the timed
And the mixture is all of us
And we're still mixing...

And all creeds and kinds and colors
Of us are blending
Till I suppose ten million years from now
We'll all be just alike
Same color, same size, working together
And maybe we'll have all the fascists
Out of the way by then
Maybe so.
Woody Guthrie

If you have read this, please consider backing me for a few pence a month over on Patreon.