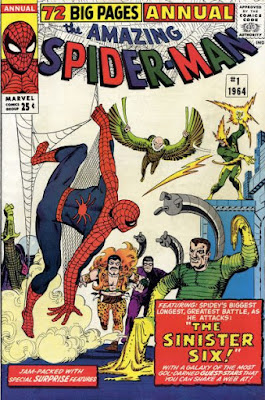 
In England, an “annual” is a hardback album, published at Christmas, with comics, text features, puzzles and games in it. In America, an “annual” is a double or treble sized comic which comes out in the summer: more like what we Brits would call a “holiday special.”

Since Spider-Man last encountered them, Electro has been seen criming in Daredevil #2; Sandman escaped from prison and was recaptured by the Human Torch in Strange Tales #115; and Kraven was knocked out by Iron Man in Tales of Suspense #58.

The features section of this issue states that Midtown High School is "3 blocks west" of Peter Parker’s house. Our working assumption has been that Midtown High is Forest Hills High School, on 110th Street. Unfortunately, if you went three block east of Midtown High, you would end up in the lake in Flushing Meadows Park. We either have to move the school, or assume that “three blocks west” is a mistake. The best I can manage is to place the Parker residence somewhere around 19 68th Avenue, where the houses don’t seem to be a bad match for Ditko’s illustration. Peter's walk to school would then be three blocks east and two blocks north. Later continuity gave the address as 20 Ingram Street (a real address, currently occupied by a presumably rather bemused family called, er, Parker); but this is a 30 minute walk from the high school.

Page 4: Flash Thompson tells Peter “you asked for it” and Peter replies “Now, there’s an imperishable bit of clever dialogue”… a rare occasion when Peter Parker allows himself to wisecrack in Spider-Man’s voice.

Page 7: “And so, it takes the once mighty Spider-Man almost an hour to make a journey which a short time earlier he would have completed in less than 3 minutes.” The building which Spider-Man is hanging off when he loses his powers is on Madison Ave (p12), some ten miles from Queens. Spider-Man is doing pretty well to cover that distance in a hour: it would probably take most people a couple of hours to walk. On the other hand, if he can really swing from Queens to Manhattan in three minutes, he must be travelling at something 200 miles per hour. (There is also the question of how he walked along the roof tops from Forest Hills to Manhattan, and indeed, what his web is attached to on the top of page 5!)

Page 9: “Perhaps you should stay home today dear? It may be a touch of virus” Last time Spider-Man fought Doctor Octopus, an unspecified “virus” turned out to be the one thing that could remove his Spider-Powers.

Page 13: The Human Torch uses firey skywriting to send a message to Spider-Man; a reference back to their first meeting when the message was “Spider-Man: Let’s Work Together”. All we can see of this message is “Spi.. Co.. F4”… perhaps “Spider-Man - Come to F4’s headquarters”?

Page 20: “You can’t leave yet, Gunga Din” In Kipling’s poem, Gunga Din is a punjabi Indian, so it’s an odd name to apply to Kraven, a white African. Gunga Din is a noble figure (”you’re a better man than I am…”) where Spider-Man seems to despise Kraven more than some of his other foes.

“You never give up, do you?? I’ll bet you’re still wearin’ a Vote for Dewey button”


Thomas Dewey was an unsuccessful Republican presidential candidate, losing to Roosevelt in 1944 and Truman in 1948. He was also Governor of New York until 1954. The Chicago Tribune famously called the 1948 election result incorrectly, resulting in photos of Truman holding a newspaper with a “Dewey Elected” headline: this may be why he’s connected with absurd persistence. If Peter Parker was born in 1949, this wisecrack is roughly equivalent to one of today’s 17 year old crime fighters saying “I bet you’re still wearing a Vote for Bob Dole button”. We have stopped pretending that the voice of Spider-Man is anything other than the voice of Stan Lee.

Page 22: “Rots of ruck” Facetious, borderline racist, cod-Asian pronunciation of "lots of luck". It may have been used as a shibboleth to identify Japanese combatants during the World War II. It was also the name of a popular tune and a brand of candy.

Page 25: “Nice try, Mysterio. But did you forget that my Spider-sense enables me to find any enemy within reach, even I can’t see him.” Probably not: but he apparently has forgotten that he has a sonar device which blocks out our hero’s Spider-sense.

Page 26: “What in Sam Hill happened to Spider-Man?”. J.J.J is not above swearing in front of his staff (usually printed as "%*!#&&" or some such). But when he is alone in his room, he is not quite able to bring himself to say "hell".

“I’ve waited a long time for this moment!” Indeed, Sandman has not been seen for more than twelve issues.

Page 33: "You know your friendly neighborhood Spider-Man is always available for weddings, barmitzvahs, and all sorts of fun things”… Confirmation, if confirmation were needed, of Peter Parker’s heritage: someone with a Christian background would have said "weddings, Christenings..."

Page 35: “Now I’ve got you, you meddlesome juvenile”. Doc Ock knows that Spider-Man is young; he knows that he has some connection with Betty Brant; he knows that Betty is dating Peter Parker and that May is Peter’s Aunt… but he can’t quite manage to put two and two together. (It’s odd to accuse Spider-Man of meddling when you’ve gone to so much trouble to arrange this confrontation.)

Page 36: “Boy! What a movie serial this would make!! A new cliffhanger every minute!!” Stan Lee can’t resist lamp-shading his sources. Movie serials were long gone when Peter Parker was growing up (the 50s were the first golden age of TV) so once again this is Stan Lee's voice, not Peters.

Page 40: “All shook up!” Elvis recorded a song of that title in 1957, so this is hardly a new piece of slang — if anything, Peter is being a little bit old-fashioned.

“Do you realize we missed the Beverly Hillbillies” The Beverley Hillbillies was at this point the highest rated TV show in the US. Season 2 ended in June 1964 and Season 3 began in the September of the same year, so when Amazing Spider-Man Annual #1 came out lots of Americans, like Aunt May, would have been eagerly anticipating its return. 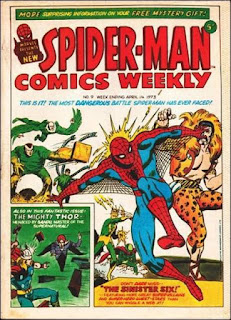 The myriad cameos, and the brace of topical references provided more than usually problematic for the UK reprint:

Page 4: The whole scene with Doctor Strange is redrawn so it is the Thing who walks past the school when Thompson tries to punch Parker. (”That’s the second time he’s almost clobbered me.”)

Page 10: The whole scene of Giant Man and the Wasp arresting the hoods is redrawn and replaced with one involving Mr Fantastic and the Invisible Girl (meaning that Sue uncharacteristically blames Reed for not paying him back for their phone calls).
Page 12: Reed Richards calls up Major Talbot (from the Hulk) rather than Captain America.

Page 13: The X-Men panel is removed altogether, panel 2 is moved to the left, and a new frame is added with Spider-Man saying “This is it Parker. No superpowers to back you up. You’ve got to do it all by yourself. I can’t kid myself. This could be my last battle.” Page 17: The Stark Electrical Building becomes the Decker Electrical building; Spider-Man is approached by a night-watchman, not Iron Man.
Page 20: “Vote for Dewey button” becomes “Beatles Forever button.” (NOTE: We don’t call them buttons in the UK.) Oddly, “Why don’t you see a barber” becomes “Why don’t you see a veterinary surgeon”? This is the last page of SMCW # 9. 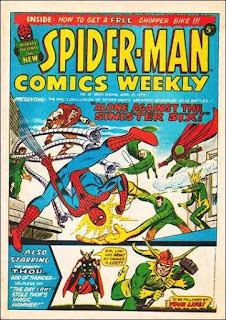 Page 21: This is first page of SMCW #10. The “psychosomatic” explanation for loss of powers is replaced with a brief summary of the the previous issue. ("Boy what a workout! First Electro attacks me, then Kraven the Hunter shows up! I'm one tired Spider-Man...")