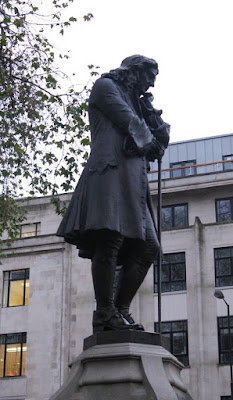 Near my old school there is a block of flats called Feline Court. The developers gave the flats that name because they are situated on Cat Hill. The Hill acquired its name because, as late as 1955, there was a pub called The Cat at the bottom of it. And the pub was called The Cat, not because of some association with Dick Whittington or even the Royal Navy, but because there had been a bridge called Katebrygge there in medieval ties.

From Katebrygge to Feline Court in barely half a millennium.

There was once a school teacher who, when asked by a pupil “Why is that flower called a daffodil?” always replied “Well, it had to be called something, and hippopotamus had already been used.”

Edward Colston was a London based businessman. He was born in Bristol during the reign of the ill-fated Charles I and died in London during the time of George I. (He therefore lived through the English Revolution, the Restoration and the Glorious Revolution, and lived to see our first Prime Minister, Sir Robert Walpole.) So far as we know, he never went to sea or worked in the merchant navy; but he served and invested in a number of companies who traded in slaves, and in products like sugar which were produced by slave labour.

You could say that any seventeenth century grocer who sold jam was implicated in the slave trade, as was any housewife or tea shop that bought a jar. Jam is made with sugar and sugar comes from Jamaica and the Jamaican plantations rely on slave labour. John Wesley told his Cornish flock to use less sugar as a protest against the slave industry, but not to stop using the stuff altogether. They stopped putting sugar in their tea (except with pasties) but still used it in their saffron buns.

Or you could say that by slave trader you mean someone who has personally put a manacle on a slave's wrist or personally wielded a whip — which Edward Colston certainly did not. Conceivably, he didn’t even quite understand the awful reality that lay behind the pounds, shillings and pence on his ledger sheets.

What is incontestable is that Colston made a lot of money out of buying and selling black people; and what is equally incontestable is that he donated a lot of that money to charitable concerns in his home city. But it is possible to exaggerate and romanticize this. Edward Colston was not personally the founder of the girls' school which bares his name: it was founded in 1891 (170 years after he died) with money that he bequeathed to the Society Of Merchant Venturers. The statue of Colston which stands in the center of Bristol dates only from 1895.

Colston did personally set up a boys' school in 1708, using a building which had previously been a sugar warehouse. In 1867, the school was pulled down and a concert venue built in its place. The new building was given the name Colston Hall, presumably because it was on the site of Colston Boys School; not because the proprietors particularly wanted to honour the memory of Edward Colston. This theater burned to the ground in 1898, and again in 1945. The present building was put up for the Festival of Britain in 1951. It was not founded by Edward Colston himself, and not built with his money.

It is not at all uncommon for buildings to change their names. The Westminster Clock Tower is now the Queen Elizabeth Tower; Covent Garden’s Floral Hall is now known as the Paul Hamlyn Hall. This is particularly the case when a particular person falls out of favour: a number of buildings named in honour of Jimmy Savile were hastily relabeled after he was exposed as a child molester. This is not at all the same thing as expunging someone from history. It is fair to say that Adolf Hitler is still very well remembered in Germany, but I imagine that relatively few public buildings are named after him.

It isn’t clear when it was first suggested that it would be better if Bristol’s main music venue were named after someone who didn’t make his fortune buying and selling black people. Since at least 2003 a popular pop band named Massive Attack have declined to play in Colston Hall because of its name. On the other hand, Billy Bragg, Steve Earle, Martyn Joseph, Reginald G Hunter and the JC4PM road show seem to have had no particular problem with it.

I used to be broadly against the scheme to rename the building. I tend to think that each generation bequeaths its memorials to the next generation and the fact that one century’s heroes are the next century’s villains is a lesson worth learning. There would be no argument for removing the statue of Charles Napier from Trafalgar square, whether he really made that joke or not. On the other hand, much of the Bristol Colston cult was not the creation of grateful townspeople in the 1700s, but of a Victorian revival dating only to the turn of the 20th century. And Colston is not a particularly important historical figure. How many other Georgian businessmen can you name? Who was the founder of your nearest private girls' school?

Pointless symbolic gestures are sometimes necessary, providing they are pointlessly gesturing in the right direction. There was in my opinion no practical purpose in granting a posthumous pardon to Alan Turing. He was already nearly universally regarded as a national hero, and it was already nearly universally acknowledged that the law under which he was convicted was a stupid law. The only thing that could have been done to rectify that stupidity had already been done: the stupid law had been repealed. However, once the question of a posthumous pardon had been raised, the debate inevitably divided along partisan lines. Those who didn’t think he should be pardoned were almost entirely of the “I’m not homophobic, but…” persuasion; moderates and liberals all thought he should be. At which point the government had no choice but to issue the pardon to indicate which side of the line they came down on.

For the past six months, the Bristol Post has been publishing letters about the Colston Hall question; and those arguing that the name should remain unchanged have been, almost without exception, racists and lunatics. Only last week someone asserted that if Bristol Music Trust changed the name of Colston Hall it would logically follow that the Egyptian Government would have to demolish the pyramids, since they were constructed by slaves. Someone went so far as to say that we would also have to ban Alice in Wonderland because they seemed to remember reading somewhere that Charles Dodgson had once met someone who was a slave trader. A steady stream of writers, presumably entirely unfamiliar with the writing of George Orwell, have queued up to say that changing the name of the building would be exactly like Winston Smith editing history at the Ministry of Truth, or else like Stalin airbrushing enemies from Soviet-era photographs, or else Hitler, or else political correctness gone mad. More worryingly, many of the letter-writers have said that we should keep the name because slavery wasn't really all that bad, and certainly nothing to be ashamed of. After all, "we" built railways and established hospitals in Africa as well. And “we” weren’t as beastly to our slaves as the Belgians were to their's. And "we" weren't the only country that did horrible things, and some Africans sometimes sold other Africans to slavers and in some parts of the world at some times in history white people have been slaves.

The most frequently made argument is that the evil men do lives after them while the good is oft interred with their bones and it should be possible to memorialize Colston as a philanthropist while deploring him as a slaver. The crime of kidnapping black people and taking them to places where they will be literally used like cattle is mitigated if you use some of your profits to set up schools and buy cottages for white people. This reminds one of the story of the man who murdered his mother and father and asked for mercy on the grounds that he was an orphan.

And I don’t think we want to do that.

So: what should the new name be?

Clearly it should be named after some respectable Bristol Citizen. Maybe it could simply become Colstons’ Hall in memory of the apostrophizer? Perhaps it could be called Banksy Hall, on the grounds that Banksy is almost as divisive a figure as Colston himself. Realistically, it could be named after an anti-slavery campaigner with some Bristol connection: the Hannah More Hall or the Thomas Clarkson Hall, perhaps. My preferred options would be to name it after a revered, beloved and treasured local member of parliament. The Tony Benn Hall has a certain ring to it.

It never ceases to amuse me that if you were a York based Jehovah’s Witness you would have to give your address as:

There is a doubtless apocryphal tale about a place of higher education that was forced to write at the top of its correspondence:

After all this kerfuffle dies down, we are likely to end up with:

And so history will be well and truly expunged.