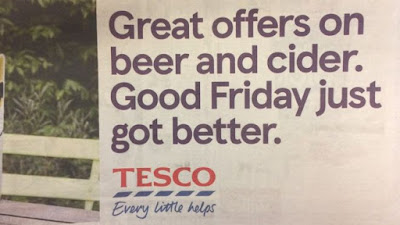 I guess that in the olden days most savings banks and mortgage lending companies were local concerns — you had a Manchester Building Society and a Liverpool Building Society, didn't you. The bank I use must have decided to put its Unique Selling Point in its name: the Nationwide Building Society. But when I get a letter from the bank, I don’t particularly hear the word “nationwide”and think "gosh, that must be happening all over the country" — it’s just what the company is called. Similarly, I don’t hear the sounds of hammers and anvils when I talk to my friend Mr Smith, or feel particularly surprised if Mrs Green is wearing a blue dress today. In fact, it was  actually a little funny when it first occurred to me that my friend Clifford’s name could be understood to mean “a ford by a cliff”.

I contend that this is what has happened with times and seasons and festivals. There is a thing we do in December called Chris Muss. If we stop to think, we can see where the name came from. Douglas Gresham insists on referring to it as “the Christ Mass” which frankly just sounds weird. Most of us. even if we keep up the religious parts of the festival, don't specially hear the "Christ" part. "Chrissmuss" is just what it happens to be called. When a church puts up a poster saying "Christmas begins with Christ" they are making a pun, on a level with "ASSUME makes an ASS of U and ME".

Now, fairly obviously, this is what has happened with the Easter festivals. Maybe, just maybe, the druids did have a goddess called Easter who they worshiped in the spring, and maybe, just maybe the Christians came over and said “We’re ‘aving that, we are.” But Estre was probably the goddess of the sunrise or the dawn, and Sunrise or Dawn are perfectly good names for the day of the Resurrection, so Christians might perfectly well have come up with the name independently. But no-one, Christian, atheist or Archbishop of York connects the word Easter with "dawn" or "East" or pagan bunny goddesses. It’s just what the time of year is called.

So, somewhere along the line the Friday before the first Sunday after the first full moon after the vernal equinox got labeled “Good Friday”. The most likely reasons are:

2: It’s a corruption of God’s Friday.

3: In a very real sense, things which look very bad to us can look very good to God and the only true goodness is in the badness.

But Guffriday is what the day happens to be called.

So for a supermarket to put out an advertisement for cheap beer, only on sale over the holiday, under the slogan “Good Friday just got better” is another pun. The reaction of most people, including most Christians, is not “OMG Tescos think cheap cider is better than Jesus’s free gift of eternal life made once for all upon the cross”. They are more likely to think "Oh yes. Guffriday, Good Friday, got better. Very good. Very satirical."

No, we don’t mark times and seasons as much as we used to. I myself drank a pint of beer yesterday evening. Yes, I can remember when no shops, and definitely no pubs or off-licenses opened on Guffriday — apart from bakers who were allowed to sell hot cross buns provided they didn’t also sell any bread. (Can anyone tell me why we eat spicy buns on Good Friday if Good Friday is a fast day?) And yes, it is a pity that many people do not realize that Good Friday is a sad an solemn day. But the sight of otherwise sane clergymen queuing up to describe the advert as crass, offensive, insensitive, sacrilegious, ignorant and illogical made me think that someone was jumping, rather late, onto a rather ludicrous egg-shaped bandwagon.

I think that it is an Easter "Egg Hunt", not an "Easter-egg Hunt". I might say to you in September "Will you come to my home for Christmas Dinner" and you would understand that I was inviting you to eat turkey with me on the 25th of December. But I would not necessarily say to my guests while they were drinking their sherry and eating their nuts on the big day "Will you come through to the dining room for Christmas Dinner, and then we can pull a Christmas Cracker and eat some Christmas Cake and have a Christmas Mince Pie" although I grant that the steamed pudding you eat with brandy butter is called Christmas-Pudding and would be called Christmas-pudding even if for some reason you had some in July. So I think that if the parish council were planning its events in January, they might say "And then Mrs Wren will organize the Easter 'Egg Hunt'". But on Easter morning after church, Mrs Wren might say "All children who want to join the Egg Hunt meet me outside". No-one would stand up and ask why Mrs Wren had removed all reference to Christianity from the egg hunt and whether she was going to go and spit on the grave of Farine Nestle. (I looked it up.) She doesn't need to say Easter "Egg Hunt" because everyone already knows it is Easter.

I also don't think that it matters.

Patrons are not being charged for this essay.

Please stop being sensible. This is the internet.

"The reaction of most people, including most Christians, is not “OMG Tescos think cheap cider is better than Jesus’s free gift of eternal life made once for all upon the cross”. They are more likely to think "Oh yes. Guffriday, Good Friday, got better. Very good. Very satirical."

And yes, it is a pity that many people do not realize that Good Friday is a sad an solemn day. But the sight of otherwise sane clergymen queuing up to describe the advert as crass, offensive, insensitive, sacrilegious, ignorant and illogical made me think that someone was jumping, rather late, onto a rather ludicrous egg-shaped bandwagon."

Not to equate the eating of chocolate eggs and the buying of cheap beer with slavery, but isn't this a similar kind of handwaving of 'people I don't agree with' displayed by your 'green inkers' (whatever that means) to the renaming of Colston Hall? "Most people just think 'Oh yes, Colst'nall, that big place over there where they play music.'" "It's a pity there are unfortunate implications, but..." "This minority of lunatics coming out of the woodwork to complain about nothing, not like true Christolians." You're almost missing a chance to say 'political correctness gone mad'.

Andrew Rilstone said...
This comment has been removed by the author.
Sunday, 02 July, 2017

Political Correctness is a conspiracy theory according to which the world is being run by Jewish intellectuals in Frankfurt. I would never use the term.

I agree that most people do not known who the Colston in Colston Hall is, and have in fact said so several times. I do not think that Colston Street is any more intrinsically connected with slavery than the Waterloo Kebab House is connected with Belgium. And if, in fact, the Green Inkers had said "This is a bit silly. We didn't realize that Colston Hall was named after Edward Colston and neither did anyone else" I would have said that they had an excellent point.

But they didn't. They said that they thought that we should continue to honour Edward Colston because slavery was not really too bad and the slaves didn't mind; because it was the black people who were to blame for slavery, not Europeans; because people in the 21st century have no right to say that using black people as livestock in the 17th century was a bit out of order; and because he may have kidnapped black people and sold them to America, but he used some of the money to open schools for white people (provided they went to the same church that he did.)

Once it has been established that the dividing line is between "We should change the name of the hall" and "We think slavery was OK" then I know which side of the line I am on. I am surprised that wasn't clear from 20,000 words I've already written about this subject.

I do not see the analogy with the Easter story at all. Some lunatics MADE UP A LIE that the National Trust had "banned Easter", and lots of people got very cross about it without trying to check the facts. Then, a supermarket REALLY DID put out an advert that was in slightly poor taste, and some clergypeople MASSIVELY OVERREACTED. They knew perfectly well that the advert was not saying "Our beer is superior to the Christian festival of Good Friday"; but they engaged in what I consider to be fake outrage. I think that the reason they did this was that the MADE UP story about the National Trust banning Easter was still fresh in the public minds, and they wanted to exploit it.

Some people are shocked by different things -- your Granny might honestly faint and recoil in horror crying "Lawksamercy, a naked man!!!" while you might say "Er...Yes, the fashion in swim wear is slightly less modest this year, isn't it." So I suppose that the Rev. Coles might have been genuinely and sincerely horrified to see the words "Good Friday" being used in a context other than Christian worship (in the same way that some Muslims are genuinely and sincerely upset if a librarian or bookseller handles the Koran roughly.) But it's a pity he tried to draw political conclusions from his reaction.