Boy, You're Gonna Carry That Weight.... 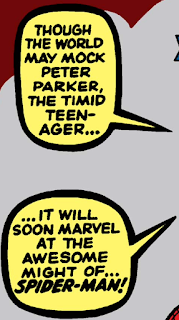 In issue #14, the Enforcers and the Green Goblin trapped Spider-Man in a cave by pushing a giant boulder in front of the entrance. Spider-Man has to enlist the aid of the Hulk to free himself. We therefore estimated that he must be able to lift about 750lbs: not quite as strong as four adult males. In issue #32 we saw him throwing a car without much effort, which suggests he is actually able to lift as a much as a ton (2000lb.) But if the wreckage he is trapped under at the end of #32 literally "outweighs a a locomotive" then it must weigh 200 tons (400,000lb; 180,000 kg) at the very least. Some spiders can lift 170 times their body weight, so if Spider-Man really has the proportional strength of a spider, he should be able to lift 30,000 lbs or 15 tons -- a lot more than a car but still a lot less than a loco.


Certainly a person can push themselves to lift maybe ten or twenty percent more than they are usually capable of. In crisis situations, they may be able to perform even more impressive feats. Jack Kirby claimed to have had the idea for the Incredible Hulk when he witnessed a young woman lift an auto-mobile to save a baby trapped underneath it. But if the wreckage really weighs as much as a train then Spider-Man is exceeding his normal capability by a factor of a hundred. How does he achieve this feat? 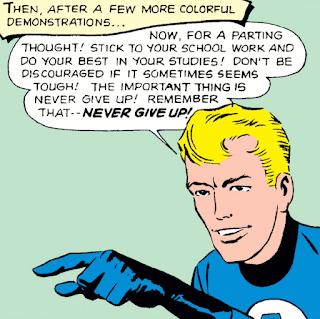 From the beginning, the main theme of Amazing Spider-Man has been perseverance. This is why he is Spider-Man and not Fly-Man or Beetle-Man. Spiders sit in caves with Scottish monarchs, failing to spin their webs but try, try, trying again. Spiders are not deterred when the rain comes down and washes them out. They simply wait for the sun to come out and dry up all the rain. Then they climb up the spout all over again.

In opposition to this stands Otto Octavius. He is the accusatory voice which tells Peter Parker that he is a no-good impostor who needs to quit, externalized and given physical form. Every time Doctor Octopus appears, Peter Parker experiences a crisis of confidence and is ready to give up being a superhero. And on two previous occasions, an encounter with Doc Ock has coincided with Peter Parker losing his spider-powers.

The last five pages of issue #32 take Spider-Man to the point of utter despair. ("I've failed! Just now, when it counted most! I've failed!") and the first five page of #33 take him to his ultimate moral victory ("I did it! I'm free!"). Freeing himself from the 200 tons of metal is not merely an act of physical strength: it is act of self-belief and moral courage. It is the supreme example of spidery perseverance.

In Amazing Spider-Man Annual #1, shortly before fighting Doctor Octopus, Peter Parker wished that his spider-powers would go away. And, sure enough, they did. He faced Electro, believing himself to be powerless and expecting to die, because it was the right thing to do. His powers returned. He became Spider-Man again because he had shown that he was Spider-Man with or without the powers.

Amazing Spider-Man #33 invokes the same principle. He consciously channels the Spider-Force; invoking his Spider-Strength as if it were a patron deity. He has previously talked frivolously about how nice things ought to happen to nice people and that the universe is unfair because he brushes his teeth and eats his breakfast cereal but still isn't rich. Today he says the same thing in deadly earnest:

"And now I've got to call on all that strength...all the power...that I possess! I must prove equal to the task...I must be worthy of that strength..or else I don't deserve it!"

This is infant school morality scrawled across the heavens. It's only one step up from the Little Engine Who Could. You don't train for a football match so that you will be be fitter and more skillful than the opposition; you train because training is morally virtuous. You don't study for a test to improve your intelligence or learn the answers; you study because it is hard work and hard work is praiseworthy. God rewards the virtuous with trophies and good test results. (More darkly, it is morally virtuous to look both ways before crossing the road; and God will punish wicked children by killing them in car accidents. And serve them right!)

Spider-Man probably comes from a Jewish heritage, but he is also an American and this way of thinking is deeply Calvinistic. Trying to lift heavy weights, even when there is no hope, shows that you are one of the Elect. But there is no hint of Evangelicalism; no God who will forgive a young superhero for a single thoughtless act. The Spider-Force is a jealous God, punishing the aunts for the sins of their nephews.

The weight is not the problem. It is heavy, but well within Spider-Man's capacity to budge. The "more than a locomotive" thing is his despair talking. The problem is doubt. Once again, Doctor Octopus has cut Peter Parker off from the Spider-Force. What is trapped under the wreckage is not a superhero, just a not-particularly-fit seventeen year old boy.

And perhaps that teenager remembers what Johnny Storm, who he so dislikes, told him the very first time Doctor Octopus shattered his self-belief:

"Don't be discouraged if it sometimes seems tough! The important thing is never give up! Remember that..never give up!..."

He certainly seems to echo those words today:

It is a normal teenage boy who declares that he is Spider-Man and wants to be Spider-Man. And once that happens, his connection to the Spider-Force is re-established. His strength returns. Doctor Octopus vanishes from the story for years.

Of course, some people might say that the strength of a superhero is never all that consistent; that Spider-Man is as strong or as weak as the story needs him to be; that he can lift two hundred tons because its artistically right.

Aye. And that's true too. 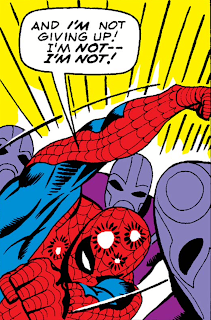 There is currently on sale a children's book which retells the origins of Spider-Man and Iron Man. It presents Amazing Fantasy #15 as a simple moral parable.

"Through the haze of his grief, Peter realized something. He had not chosen these abilities but it was his obligation to use them for good. It was not about the money or fame or any of the other rewards his power could give him. He had finally realized that what his Uncle Ben had told him was true: with great power comes great responsibility. And that was the rule Peter Parker lived by from that day forward."

This is utterly at odds with the story presented in Amazing Spider-Man #1 - #33.

Ben Parker is not Thomas Wayne and the Burglar is not Joe Chill. Uncle Ben's death is never represented as a transformative moment for Peter Parker. It is always represented as a burden which he must carry. He wants to save Aunt May so he will no longer be haunted by the death of Uncle Ben.

Haunted. Uncle Ben is a ghost and The Final Chapter is an exorcism.

Doctor Octopus represents and personifies Peter Parker's self-doubt. But Uncle Ben is the psychological Achilles heel which he exploits. When Spider-Man wished his powers away in the first annual, it was Uncle Ben he was thinking of. The first words of the first issue of Spider-Man make that connection very clear indeed: "Uncle Ben is dead, and it's all my fault...My Spider-Man costume. I wish there was no such thing."

Uncle Ben is not Spider-Man's inspiration and moral compass. He is his albatross. His kryptonite. The memory of Uncle Ben is the thing which prevents Peter Parker from fully becoming Spider-Man.

Peter says that if Aunt May dies it will be his fault. It really, really won't be. He has done everything he could possibly do to get his hands on the serum, selling all his material possessions, losing his friends and his lover, putting his life on the line and struggling to the point of physical exhaustion.

But then, he was never really responsible for the death of Uncle Ben. A bad man made a bad choice to commit a bad act. How many thousands of other people are more responsible than Peter Parker for facilitating that one man's bad choice? The economic system which made him poor? The teachers who failed to teach him right from wrong? Uncle Ben himself for choosing not to stay late at the factory that night? And what if no matter how much the burglar wanted to commit an armed robbery he couldn't have laid hands on a gun?

But that idea of responsibility runs counter to everything Steve Ditko believed. To the Randian objectivist:

"Every man is an end in himself, not the means to the ends of others. He must exist for his own sake, neither sacrificing himself to others nor sacrificing others to himself. The pursuit of his own rational self-interest and of his own happiness is the highest moral purpose of his life."

The death of Uncle Ben has given Peter Parker a false sense of responsibility; a responsibility he can never live up to. He is trying to carry an unbearable weight. That is what makes him miserable. That his where what-he-calls "the Parker luck" comes from. That his why it sometimes seems to him that in becoming Spider-Man he lost the capacity to be happy.

Peter Parker did not kill his foster father. And if he did, no amount of freelance superheroing could atone for it. If you want a Christian message, there it is: good works can't save you.

Peter Parker says that he "can't bear the thought of failing Aunt May the way I once failed Uncle Ben." And then he says that the "the weight is unbearable". And the physical strain of lifting the unliftable weight: that's "unbearable" too.

And yet he bears them. 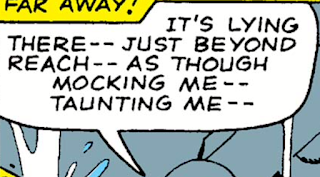 Peter Parker brought the weight of the underwater base down on himself, by recklessly throwing heavy machinery at Doctor Octopus while he was trying to escape. The situation he is in is his own fault: he traps himself. But Parker is an egotist. He thinks he has the right to be happy. He thinks that things are supposed to go his way. When they do not, he thinks that the universe has singled him out for misfortune. Believing himself defeated, he attributes malignant agency to the serum itself.

And the language he uses is highly significant:

What was it he said, all those years ago, the very first thing we ever heard him say?

"Some day I'll show them. Some day they'll be sorry! Sorry they laughed at me!"

And so the saga of Spider-Man has come full circle.