Once Upon A Time, There Was a Robot... 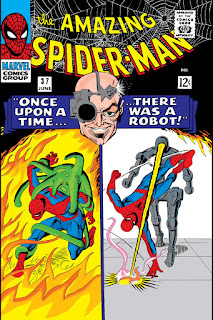 Villain:
Professor Stromm and his robots

Peter Parker's financial situation
Peter hasn't be paid for the last pictures he sold Jameson -- presumably the pictures of the Molten Man in issue #35. He is probably still living off the thousand bucks he earned in #33.

Chronology
This story appears to occur within a single 24 hour period: Stromm is released from prison early in the morning; attacks Osborn early that same evening; and dies late that night or early the following morning. Not very long has passed since the Looter story, because Peter is wondering if Gwen is still cross with him. So it probably takes place in the second week of October 1965.

p1: "You will always address me as Professor!"
Professor is a job title -- in Europe, someone who heads a university department, in the U.S.A, any academic with a teaching post. Surely Stromm lost his university position when he was sent to jail?

p4 "Gosh, every time I come up here, Jolly Jonah has a new secretary.."
This is literally true: in issue #33 Betty was still in her job; in issue #35 Jameson had hired a dark haired woman; and this time a blonde glasses-wearing lady has the job. But Lee is trying to retrospectively establish a running gag -- Jonah's staff keep quitting. In fact there have only been two new secretaries in four issues.


Stop the presses! Amazing Spider-Man #37 has an actual plot. There are car chases and burning buildings and people tailing each other through seedy parts of town. People get captured and escape and shot at through open windows; there are three, count them, three major plot twists and more fights than you can shake an extended metaphor at. Not only does the tale rattle along well enough on its own terms, but it is obviously putting the playing pieces in position for a big new plot arc which will (we assume) be developed over the next few issues.

A Scientist, Prof. Stromm, is released from prison. It isn't clear what he was in prison for, but now he wants to take revenge on the person who put him there -- and also cheated him out of his inventions. (I cannot imagine why Ditko would want to tell a story in which one person steals another person's ideas and takes the credit for them. It is inexplicable.) In no-time at all, he has knocked together a wonderful green octopus-shaped robot and sent it to destroy his enemy's electronics plant, which helpfully has the word "Electronics" written over the door. Spider-Man intervenes and defeats the robot, but the factory is left in ruins.

Now comes the first Big Twist. Over the last couple of issues, Stan Lee has been quite happy to chastise Steve Ditko in print when he thinks a plot development is a bit too obvious. ("Now that we have pretty well telegraphed what is going to happen next...") So it is rather significant that he takes the trouble to tell us readers how proud he is of this weeks twist. "And now we have a small scale surprise for you..."

The surprise is first, that Stromm's crooked partner is none other than Jameson's Important Friend from the businessman's club. (Today, he is wearing a green suit; but there is no reason to think that the colour green is of any particular significance.) And secondly, the Guy From The Club, who has distinctive red curly hair, is the father of Harry Osborn, who's hair is equally red and equally curly and equally distinctive. There are only so many ways to represent hair in a cheaply produced four-colour comic, but as John Byrne spotted thirty years later, Sandman is the only other character to whom Ditko gave a similar coiffure.

Fifty years later, it is really hard to get our collective heads around the fact that this was a surprise, a twist and a pay-off. Everyone knows that Norman Osborn is Harry's father; and everyone knows what secret The Mysterious Mr Osborn will ultimately turn out to have been hiding. And it is hard to remember that Harry Osborn was not, at this point, a particularly significant character -- certainly not Peter Parker's best friend. He appears, briefly, in a college scene on page 6 of the present issue, telling Gwen that Peter Parker "gives him a swift pain." But four pages later, Stan still feels the need to remind us who he is: "Remember Harry Osborn, one of Peter Parker's nastier school mates?" Our working hypothesis is that Stan doesn't read ahead: he writes the captions for page 2 before he has studied page 3. He probably didn't know that Club Guy was Stromm's adversary or that Harry was Club Guy's kid before he saw this panel. If he had known, why wouldn't he have foreshadowed the revelation in the school scene?

Peter's investigation of the case begins with an interesting little narrative dead-end. We are told that Stromm shared a cell with Foswell during the latter's brief incarceration. This allows Foswell to "feed" Peter information about the back-story -- a perfectly legitimate plot device. Peter puts one of his spider-tracers into Foswell's hat, so that Foswell will lead him to Stromm. But in fact, before going after Stromm, Foswell disguises himself as "Patch" the underworld informant, with a completely different hat. Patch is becoming quite a useful plot-cog: he bribes some hoods to tell him where Stromm's base is and Spider-Man follows him. But the spider-tracer was redundant -- Spidey just happens to bump into Patch at the appropriate moment. A technological homing device is insignificant next to the power of the Plot.

There is no comparison between the long-drawn out, not to say padded fight-scenes from issues #34, #35 and #36 and the very concentrated plot that Ditko gives us today. (I don't know what the old-fashioned, dyed in the wool Spider-fans made of it, but this new-fangled washable reader loved it.) In the space of three pages, Spider-Man follows Patch to Stromm's base; they are both captured; Spider-Man escapes through an air duct and puts a tracer on Stromm's newest robot; Stromm sends the robot to attack Norman Osborn, and Spider-Man bursts into Osborn's office and protects him. At first reading, I asked "How does Spider-Man even know where Osborn's office is?" And back came the answer "Because he put a tracer on the robot, 14 panels earlier." Ditko knows what he is doing.

But Osborn doesn't want to be rescued. Somehow, if Spidey beats the robot, it will mess up his "plan to get rid of Stromm forever". He feels that Spider-Man has "butted into something that doesn't concern him" and that he is "dangerous to my plans."

There follows a small fight between Spider-Man and the robot which is ended when Osborn -- you'll like this -- hits Spider-Man across the head from behind and knocks him out. (Spider-Man assumes he has been hit by a lump of debris.)

Over the last three issues, one has had a sense of Stan Lee desperately typing out verbiage to paste into artwork that doesn't really need any exposition at all. (This may be the real reason he resorted to the sound-effects-only sequence in issue #35.) But this issue he is skillfully using thought bubbles and captions to enable us to keep track of a very dense plot. "I wonder why the robot didn't follow up his advantage?" asks Spidey when he comes round "The answer must be that he thought I was dead!"

Spidey catches up with the robot and smashes it. And then we all get hit by a massive lump of Plot. Stromm, realizing the game is up, performs a classic piece of villainous exposition "Even though you've caught me, I'll still have my revenge! There is something I must tell you! Something no body else knows about..."

At which point of course he conveniently drops dead.

There is a major discrepancy between the artwork and the annotations at this point. It is clear from the pictures what is supposed to have happened. We see Stromm about to reveal a big secret. We see a gun pointing through an aperture, half way up a high wall. We see Stromm, dropping dead before he can finish his sentence. And we see Spider-Man leaping up to apprehend the assassin at the window...and finding that there is no-one there. ("It makes no sense. How could he have vanished so soon? How did he get up there in the first place? There was no rope, no ladder, and no sound of a helicopter.") But for no reason that I can see, Lee's script tells us that Spider-Man spots the danger in the nick of time, pushes Stromm out of the way, leaps up to apprehend the would-be assassin -- only to find that Stromm has died from a heart attack. I do not understand why Stan thought his version was an improvement.

But there is still one more twist to come. On the final page, after everyone has said thank you and
good night to everyone else, the gunman is revealed to have been...Norman Osborn! The "next issue" box and the letters page are in full agreement that we will find out more about the "mysteriously sinister" Mr Osborn next month.

What is the solution to the mystery? What is Norman Osborn's secret? Can anybody guess?

Although this story does not carry anything like the emotional punch of The Man in the Crime Master's Mask or The Return of the Green Goblin, it does represents a distinct return to form. It is a dense, complicated story with plenty of action, rather than a single big gladiatorial combat. Spider-Man has agency throughout; but he is caught in the middle of a two or three sided conflict that he doesn't see the whole of. There are jokes ("Look out! He's getting away!" "Thanks for the bulletin - but I sorta noticed it myself!") but the endless running commentary never becomes tiresome.

Should we say that when Ditko delivers below-par work, Stan Lee's typewriter starts to waffle; but when Ditko turns in something as good as this, Lee raises his game? Or would it be fairer to say that when Ditko hands in a story with no substance, Lee (quite correctly) tries to embellish it with verbal fireworks; but that when Ditko hands in a great piece of work, Lee is equally happy to fade into the background and use his text to cast Ditko's work in the best possible light? One way or the other, we have every reason to believe that this is the first in a new run of Lee-Ditko classics.

No-one realized it at the time; but the game was up.