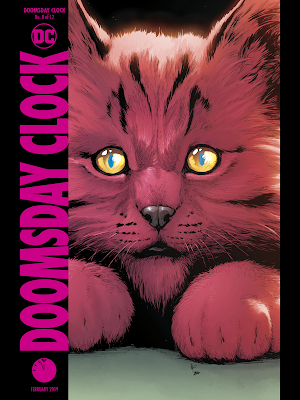 I think I finally understand.

Or perhaps those are characters who, whatever their origins, have been folklorized. Characters who have bounced from writer to writer and from medium to medium for nearly a century. Characters who are bigger than any one creator. Batman isn't Bob Kane's Batman, and possibly never was: he is just Batman. Each writer writes the Consensus Batman and passes him on to the next writer, knowing that Consensus Batman has changed, ever so slightly, under his brief custodian-hood. The Watchmen characters haven't been, and shouldn't be, folklorized in that way: they belong too much in a single text. It makes sense for Geoff Johns to be writing about Firestorm in the way that Geoff Johns would write about Firestorm. It makes no sense whatsoever for him to be writing about Doctor Manhattan in the way that he imagines that Alan Moore would have written about Doctor Manhattan, had Alan Moore not comprehensively killed him off and said very publicly that there shouldn't be any more Doctor Manhattan stories. So obviously, the DC Universe scenes work and the Watchmen scenes don't.

Or perhaps that's just what we've been conditioned to think by the movie/publishing complex.

Perhaps the comic that Geoff Johns really wanted to write was the seventeenth reboot of the DC Universe, bringing back Kid Flash and the original Justice League and possibly making the whole thing slightly less dark and slightly more Silver Agey. Perhaps someone Upstairs said he could only write his reboot if it included the cast of Alan Moore's graphic novel, and he agreed. Or perhaps he realized that his story needed a super-god to muck around with history and challenge Superman, and found himself thinking "Wouldn't it be a wheeze if my God Like Being was Doctor Manhattan?"

Or perhaps none of these things are true. What certainly is true is that this episode has very much more fluidity and characterization and, oh god, dare I even use the word, fun than the previous seven issues of Doomsday Clock.

Or perhaps Superman and Batman and Lois Lane and Firestorm are fun and interesting characters no matter what you do with them. Perhaps the Watchmen characters are, out of the context of that one particular text, actually quite boring.

Or perhaps that's just what we've been conditioned to think.

In this issue, the subplot which has been simmering away in the background since issue one pushes its way to the front of the stage. The Watchmen cast are almost entirely absent. Geoff Johns takes the trouble to write in some exposition about the DC characters and the current state of the DC Universe. This enabled me to keep track of which superhero was who and therefore have a fairly good idea about what was supposed to be going on. "Firestorm wasn't created by some secret government programme, Lois" says a bespectacled news reporter in an old-fashioned blue suit "Ronnie Raymond and Prof Martin Stein were in a nuclear accident which fused them together. Ronnie's in control of the body, and the professor advises him telepathically."

Perhaps it is in the nature of classical comic book characters to explain the plot to each other in short sharp sentences. The Watchmen characters, being realistic, can't be expected to tell each other things they already know, so we can only find out what is going on through the medium of oblique flashbacks and sidelong glances. An interesting Watchmen/DC crossover would have played on that. Imagine Superman having a Doctor Manhattan style reverie, taking us back to Krypton and Kansas in non-sequential flashbacks, while Rorschach says "I'm trying to fill the shoes of a hero who never really was! Gosh, how ironic!"

Or perhaps Alan Moore did that years ago, under the title of For The Man Who Has Everything.

The overwhelming majority of DC superheroes are American. Meta-textually, this is because DC Comics are published in America and the overwhelming majority of DC Comics readers are American. However, people inside the comic book universe have started to realize this; and they have developed a theory that all the superheroes (apart from Superman) have been created by the American Government, and should therefore be regarded as military weapons and regulated by treaties. The appearance of a superhero (apart from Superman) anywhere in the world could be regarded as an act of war. This is the Superman theory. It may have been deliberately created by Lex Luther to make life hard for Superman, but on the other hand it may not have been.

In this issue, the previously exposited Firestorm has been illegally superheroing in Russia, lost control of his powers, and turned an entire innocent crowd to solid glass, which the Russians take to be an act of war. Firestorm takes refuge in Kahndaq, a sanctuary for superheroes ruled by Black Adam. The last time I looked, Black Adam was the evil opposite of Captain Marvel. He now seems to be a kind of edgy good-guy who Superman treats with cautious respect. Superman and Firestorm work out how to use the latter's powers to make the crowd of glass statues human again, and Superman uses his innate nobility and charisma to get the Russians on side; but just when everything is going to be okay the army and Batman arrive, there is shooting, and the statues get smashed.

The episode begins with Ozymandias, who has possibly somehow got inside the Oval Office, pulling a secret file off a shelf and saying "This will do nicely". Halfway through the episode, Lois Lane gets a memory stick containing footage of the Justice Society, who she has never heard of, and the final page has Ozymandias sitting in front of a bank of TV screens. (I like the fact that the high tech bank of TVs he had in Watchmen have been replaced by several different widescreens and some tablets.) Last issue he said "I have a plan"; this issue he says "It begins". If this is all too subtle, the alternative cover (all comics have lots of different covers nowadays) shows Ozymandias as a puppeteer, controlling marionettes representing Superman and Doctor Manhattan. 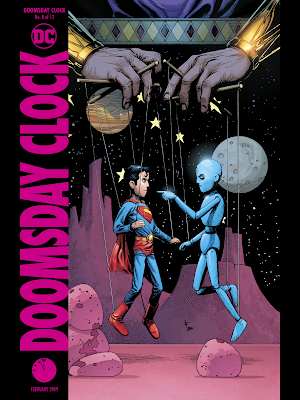 So: the situation has been engineered (somehow) by Ozymandias. I think that what is supposed to have happened in the final panel is that Ozzy has somehow let off a Nuke or at any rate a Very Big Bomb in Moscow, but made it look as if the explosion is Firestorm losing control of his powers. He thinks that engineering a war between the US and Russia will force Superman to stop Doctor Manhattan. Stop him from doing what? I have rather lost track. Superman is certainly the biggest name hero in the DC cosmology; but I don't see why he is thought capable of challenging Doctor Manhattan, who is very nearly literally a god.

But doubtless this will all be cleared up sometime before the summer of 2019.

Or perhaps that's what we've been conditioned to think.

Support my patreon -- pledge $1 each time I write something.

Superman is certainly the biggest name hero in the DC cosmology; but I don't see why he is thought capable of challenging Doctor Manhattan, who is very nearly literally a god

I once read a roleplaying game where characters were assigned dice (or whatever — poweriness, anyway, I forget the exact details) not on size or strength or whatever, but on narrative weight.

It was supposed to be used to recreate the feel of '80s children's cartoons, and to deal with the fact that tiny characters who by rights should have been crushed five minutes into the first episode (like Bumblebee in Transformers, for example) quite often not only held their own against characters many times their size but usually won the day too.

Struck me as a very good idea, and I'm sad I never got around to playing it.

Anyway though: Super-Man clearly has the most narrative weight here, being a household name while only geeks and nerds have ever heard of Mr Manhattan PhD, so I'd say the smart money is — despite the whole 'god' thing — still on the guy wearing external underwear as opposed to the guy wearing no underwear at all.

By the way is it supposed to be 'ironic' or something that in the original comic book Mr I-got-my-name-from-a-Shelley-poem was trying to stop a war between the USA and Russia and apparently in this he is trying to start one?

We probably don't have to back to first principles and discuss the nature of narrative after every review. But yes, we know that Superman will win because he is the most important character in the DC universe. Just as I've said we know that Batman can defeat any villain by virtue of being ther goddam Batman. But from Ozymandias's point of view, Superman is a very strong guy who can lift mountains, where Manhattan is a monotheistic deity who can create his own universes.

Very good. I'm having that.

Well, it was really just an excuse to mention the roleplaying game and get to the underpants gag.

get to the underpants gag

That read differently in my head.