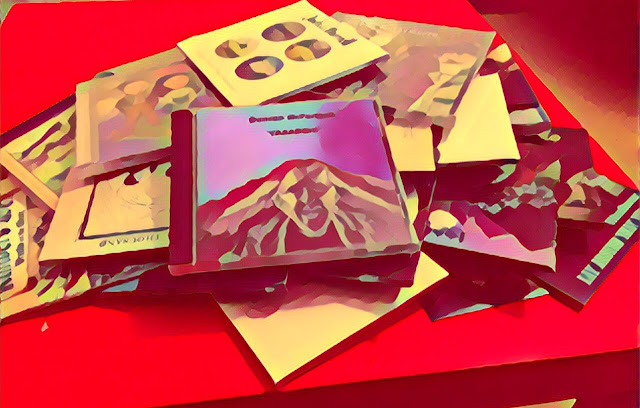 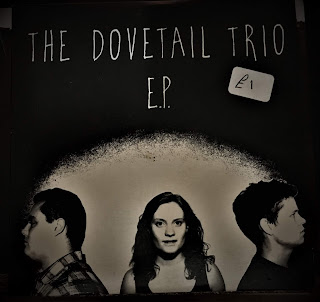 There is still a £1 price sticker on this little EP, so I think it must have come from the bargain bucket at the Black Swan folk weekend in York last year. It's not a band I've ever heard, although once I looked at the small print I realized that I knew all the performers individually. Jamie Roberts is one half of Gilmore and Roberts; Rosie Hood knows more about folk-songs of the upper Thames than anyone has a right to and Matt Quinn was the folkie who  legitimately blew me away at the "folk rising" events at Sidmouth last year.

If the Devils Doorbell were to be imagined around a campfire, the Dovetail Trio are clearly playing on a village green, or perhaps in the corner of some conceptual tavern in an imagined village. English folk music deals with all the most basic and fundamental shared human experiences. Randy soldiers. Beer. Shape changing blacksmiths. And of course, ladies dressing up as men so they can join the army.  Some of this material is relatively dark: John Barleycorn is arguably about human sacrifice. The Two Magicians is arguably about rape. But the Trio has gone for cheerful, not to say jolly versions. It's the kind of music which make you want to dance, very probably with bells and hankies.

Sing the last chorus a couple more times. Play it through again on the instruments. Maybe do it once more a capella. Pour another beer. We'll still be doing this material in six hundred years time. I love this album to bits.

Where there are traditional sources, the band sticks quite closely to them. "When I was a young maid..." is relatively well known as "The Female Drummer" from Steeleye Span via The Watersons. It an old story: girl dresses up as a boy; joins the army; learns to play the drums; gets away with it for a bit; gets found out; has to quit; is allowed to keep her pension. But there's a 1955 field recording of a Scottish lady singing it in a pub, and that seems to be the version Rosie Hood is following. It has less rub-a-dub-dubbing but a much better melody. It's rather franker about cross-dressing than some ballads:

There are those who say that until you understand John Barleycorn, you don't understand folk music. There are also those who say that it's a late and artificial concoction, but we don't pay so much attention to them. In the hands of Chris Wood, for example, it can have an unsettling Wicker Man undercurrent. It is, after all about a man being tortured and mutilated, even if it is also about brewing beer. But this version as all rhythm and refrain and will creep up behind you and force you to sing along, even in the most gruesome party.

The Two Magicians is an everyday story of country life, in which nasty, husky, dusky, fusky, musky coal-black smith tries to have his wicked way way with a young lady. She magically transforms herself into a hare, as one does, so he transforms himself into a greyhound; and so on, for as many stanzas as the audience will tolerate. The Carthy/Swarbs version is disconcertingly rapey, with the Smith promising to lay down the woman's Mighty Pride. (Joshua Burnell, of whom more anon, has added a verse in which the Woman promises to pay the Smith back in kind.) But the Trio's version is more a game of kiss-chase than a seduction; an exhilarating romp through the woods which both sides seem to be enjoying.

Admittedly the lady wants to "die a maid and be buried all in my grave", and the black smith seemingly wins the day after she transforms herself into a corpse and he transforms himself into the earth she's buried in. So maybe this version is still pretty dark. But by the time we've run through a couple of a choruses it's hard to think that anything awfully bad has happened.

There's quite a bit of seduction on this short record, come to think of it. On Yonder Old Oak is pure Copper Family; unadorned, unaccompanied, full-on harmony singing of the kind that they'd been passing down through families Round These Party for half a dozen generations. The guy asks the girl out; the girl vows and protests that she never will be kissed by no such a fellow as he, and its all over bar a verse about Bright Phebus and King Cupid. But the man may get a little further during the gorgeous and familiar "Lady and the Soldier" ("to hear the sweet nightingales sing") depending on whether or not you think "hearing the sweet nightingales" is a euphemism.

I love this album; it sums up pretty much everything I love about folk music. Rooted in traditional music, and I assume in old recordings of traditional music; fine old melodies telling fine old tales; fine young musicians going round and round the melody, getting stuck into the tunes without ever being tricksy or flashy.

Pour the nutbrown ale and and I may just join you on the village green.

Note; Patrons are NOT being charged for this review


The Dovetail Trio's EP is available on their website for £6, (they'll sign it for you if you want, which is a nice touch.)