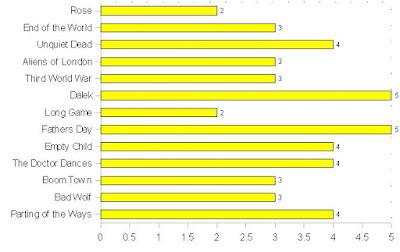 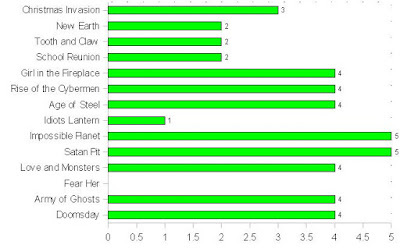 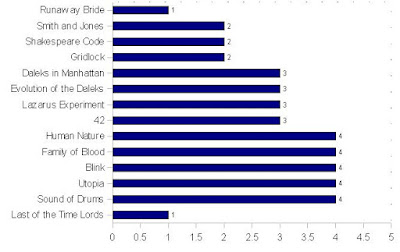 
A: I agree with you that there exists at least one pre 2005 episode of Doctor Who with something wrong with it. I entirely concur that the plot twist in episode 2 of 'Invasion of the Muppets' was rather contrived, and that the Doctor's companion Jerri sometimes fluffed his lines. I agree that the original series frequently spent 100 minutes telling 75 minute stories, although I must confess that I find this preferable to spending 45 minutes telling 90 minute stories, or spending 90 minutes telling no damn story at all. This would be a scintillating riposte to my critique if I had ever argued that the New Series should be more like the Old Series or that NooWoo is not TrooHoo. I've said repeatedly that I like what RTD has done with the setting; like what he has done with the Doctor and especially like the presence of characters like Jackie, Mickey and Wilfy who would have been inconceivable in Old Who. What I don't like is RTD's pisspoor sense of narrative.
B: No, actually, I do not think that I am over-analysing. Being in possession of a brain, I find it difficult to switch it off. You might think that I would be better off directing it Pride and Prejudice or inventing a cure for Cameron, but you're reading this page, so yar-boo-sucks. If I notice that a male character is carrying a pink handbag, wearing a tutu, and obsessively performing his own special round and round dance, I cannot dissuade my brain from saying "I wonder if they are trying to tell kids that gender non-conformist behaviour is OK?" I do, of course, agree that you have to watch a TV show on it's own level, and can't expect Torchwood to be as sophisticated in its treatment of gender issues as Tellytubbies. That's why I am much more forgiving of "The Sontaran's Slightly Convoluted Stratagem" and "The Daleks Take Manhattan" than some mosquitos. If I'm offered "cliff hangery flying saucery earth invasion stories", then I'm inclined to accept them as such. But I don't quite see the argument that says that its okay to respond to a TV series, but only if you do so in a vague, half-arsed, disengaged way. Indeed, I'm not sure if this is even possible. Is the idea that I should hear the Doctor say "We are near the Sensephere" and by some peculiar Zen process lock down that portion of my mind which notices which 1964 story is being referenced? A bit like Holmes' trick of hearing the news that the earth goes round the sun and deleting it from his memory because it isn't relevant to forensics?
C: I take your point. A purely Marxist critic would indeed say that Doctor Who is precisely the kind of thing which the market would inevitably produce at this time, and that to apply aesthetic judgements to it is a category mistake. If Doctor Who is flawed, the solution isn't intelligent criticism, but the overthrow of capitalism. And a purely capitalist account, such as used by Russell T Davies, would hold that the claim "this is badly written" is entirely refuted by the statement "this got extremely high viewing figures" :"this makes money" is synonymous with "this is good". The point isn't whether or not I regard both points of view as being value-free to the point of being sociopathic, which I do. The point is that if we accepted the equation "To be popular is to be good", then criticism of any kind would be impossible, and none of us would ever say anything at all. It is true that 10.5 million people watched "Journey's End"; but it is equally ture that several million more would have watched two hot chicks having lesbian sex on the sofa. Channel 4 have for a number of years based their entire business model on this insight.

D: Yarvelling
E: Yes, I am aware that there currently exists at least one very good cop show, and I admit that I don't watch cop shows. If I had claimed that "The Unicorn and the Wasp" was the single best piece of drama ever to appear on television, then "Have you seen Blue Remembered Hills" might be a reasonable riposte. But I haven't been comparing Doctor Who either favourably or unfavourably with other TV shows. I've merely been saying I think it would be improved better if it had an actual plot. (My specific point of comparison has been Buffy the Vampire Slayer which RTD has explicitly acknowledged as his model.) Is your claim that if I had watched The Wire I would understand that TV has moved into a post-narrative model?

If you have enjoyed this essay, please consider buying a copy of The Viewers Tale or Fish Custard which collects all my writings about Doctor Who to date.

Alternatively, please consider making a donation of £1 for each essay you have enjoyed.

I had an English teacher at secondary school called Hamish Wilson. He was about the right age, and he looked a bit like the one blurry photo in the Doctor Who encyclopaedia in the library, but we could never quite summon the nerve to ask if he was the Hamish Wilson.

I thought you liked "Rose." You certainly seemed to think highly of it at the time it aired. What changed your mind?

A purely Marxist critic would indeed say that Doctor Who is precisely the kind of thing which the market would inevitably produce at this time... If Doctor Who is flawed, the solution isn't intelligent criticism, but the overthrow of capitalism.

I was beginning to worry you weren't going to get that one...

If it's all the same, I think I will go ahead and enjoy Dr. Who. You can chalk it up to the American education system and our total lack of cultural sensitivity, but I thought that Blink was a very enjoyable, well filmed, well written episode.
Though you might have a point about 90 minutes of story being crammed into 45 minutes of space here and there.

Oh, I liked "Blink" as well: my only heresy is in thinking that it was "very good" rather than "excellent".