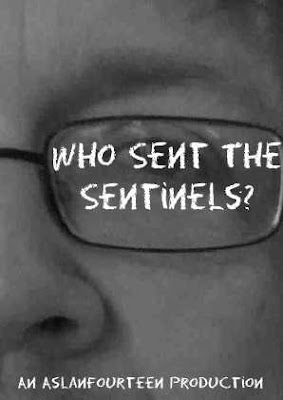 Or, for the complete 1980s fanzine experience, print it out, cho0sing Print Scaling / Booklet Printing, fold down middle, and staple with inadequate staple gun.

Who Sent The Sentinels is available from Lulu.com for £5 plus postage.

This is very good news, indeed.

Great stuff. You've been missed. Only read the first dozen pages so far, but it's wonderful.

Having now read the full thing, I can safely say it's some of your best work and also some of the best writing I've ever read on Watchmen.

It says a ton of things I've wanted to say myself but not quite been able to articulate. Bravo.

Wow, I have a booklet mode printer at work, so I can actually do the full 1980s fanzine experience \o/

Just finished stapling mine.
I made a right pig's ear of it, very authentic.

Andrew, I would happily pay real money for a hard copy of this booklet. Have you considered making one available using lulu.com or similar?

Agreed with Mike. I'd gladly buy a hard-copy...

I would recommend more than just this piece. Perhaps "The Collected Essays Of Andrew Rilstone"? (and I'd buy that, too.)

I used to think I was sooo grown up for reading Rampage magazine.

Finally read it all through. Very good stuff indeed. An ingenious idea to present it all in this form, as a zine, as the separate articles combine with and reflect upon each other as you continue reading, like (fanciful metaphor incoming) argumentative origami. And of course with the added irony that Watchmen itself makes its points by juxtaposition.

Yes, Stan Lee incorporated those ‘realistic’ conventions into the superhero fantasy, yet simultaneously added a fresh metafictional dimension where he perpetually intruded as the author. Why has that never occurred to me before?

One minor quibble: I was thinking all along that your chief interest was how the film reflected back upon the original comic, how any successes or failures it might have threw fresh light upon the original. I was thinking, how typical of ‘us’ that approach is. Then I got to the bit about what ‘we’ really want is our superheroes up on the big screen.

Yet Watchmen was the one example ‘we’ were all smugly sure would be a grand folly, the most unfilmable comic of all, a task so difficult that only the terminally stupid would ever attempt it in the first place, why not try making a Cubist painting into an action movie etc etc. In fact ‘we’d’ probably talked the film down so much before release that our anti-hype had done it a favour, if it came in as anything better than serviceable it was away.

Me, I’m still holding out and insisting that superhero adaptations should be a) animated and b) not standalone films but presented in serial format, just like their source material. But I’m an obsessive diehard. (Otherwise known as one of ‘us’.) And even I admit there’s been enough decent stabs at live action superhero movies (amid the bad) to suggest the concept’s not self-evidently ridiculous.

Then again, maybe I just lack the fixation for three dimensions. I amble by those action figures in the comic shop with barely a glance. Particularly that halfassed Galactus one which, had it really been made to scale with the other figures, should have been actual human size at least. Plus, for added realism, eaten your other action figures when you weren’t looking.

God help me!" said the priest in a loud voice, "That we have here the 'Tirant lo Blanch' ! Hand it over to me, my friend, for I am telling you that I found on it a treasure of enjoyment and a gold mine of recreation. Here it is Don Kyrieleison of Montalvan, valiant knight, and his brother Thomas of Montalvan, and the knight Fonseca, and the battle the brave Tirante fought with the mastiff, and the witt of damsel Plaerdemavida (Pleasureofmylife - ed. note), and the loves and lies of the widow Reposada (Rested -ed note), and lady Emperatriz (Empress - ed note) in love with the squire Hipolito--in all truth, my friend, by right of its style this is the best book in the world: here Knights eat, sleep, and they die even doing a will, things that all the rest of books of this genre lack. Having said all this, I am telling you that he deserved to have this book written because he did not do as many silly things as to deserve to be thrown to the galleys for the rest of his life. Take the book home and read it, and then you will realize that all I told you about it is true."

Yes, indeed. Plenty of people like Citizen Kane. I happen to agree that it's the best film ever made. Maybe you have to be American to really appreciate it. (It was originally going to be called "American," after all.) But then I had no idea that anyone nowadays actually read and enjoyed Chaucer. Perhaps you have to be English?

No - I'm British and I love Kane too (and indeed all Welles' work) while my USian wife loves Chaucer...

(And Halo Jones may or may not be minor, but DR & Quinch is a work of staggering genius).

So, having already written the most intelligent and insightful articles ever on the Star Wars hexology (http://www.rilstone.talktalk.net/arts.htm and start at part 4), Andrew's now pulled the same trick for Watchmen. Having finally reached the end of this epic analysis. I am awestruck with admiration. I love Watchmen and thought I knew it inside out; but I learned so, so much, and now immediately want to go back and re-read it. Thank you, Andrew!

Very nice indeed and reminds me why I used to read Aslan despite all the, well, you know, the waffle impenetrable to people you didn't play with. So it was fun to see that font come back for the review page. I made the mistake (big, bad mistake) of trying to explain this stuff for a dissertation back in 1995 centering on Watchmen, right down to most of the visual synchronicities you listed. This explains perfectly why it makes no sense to anyone else who's not a big old geek.
Oh, I knew there was a reason I meant to comment: you've got your blog's URL wrong on the credits page, there's an r missing. Ever the sub, that's me.

That, and one or two other typos, fixed on v1-2. (Trivial typo corrections only: definitely NOT worth wasting ink on if you already printed out a copy.)

Don't know if you saw, but Eddie Campbell *also* has nice things to say about it:
http://eddiecampbell.blogspot.com/2009/08/t-heres-been-recurring-theme-here-since.html

"Why couldn't someone have taken him to one side and said 'Ang, Ang, Ang: A comic book is just a storyboard for a movie they haven't made.'" -- Andrew Rilstone, review of Hulk (2003?)

"Now everyone goes to the movies, the best books are the ones which read like movie scripts and the best comics are the ones which look like storyboards. So no-one could understand why Alan Moore didn't jump for joy at the thought of seeing his graphic novel turned into a filum. We didn't get that he wrote a comic book because a comic book fitted the kind of thing he wanted to write. If he'd wanted to write a screenplay, he presumably could have done so." -- Andrew Rilstone, review of Watchmen (2009).

(I admit I am not 100% sure what point I am making here, beyond that Andrew contains multitudes.)

Oh, and by the way Andrew: if you don't tell us what you thought of Prince Caspian soon, I am going to get very cross.

Welcome back Andrew, I've missed you.

This one passes my gold standard of essays: since reading it, I've spent all my time trying to convince myself that I could've written that. Unsucessfully.

Andrew, I'm very, very pleased with this, for reasons that are hinted at in the pamphlet itself. One of the problems with internet fandom is that it tends towards a "Memory Alpha Effect," viz., obsessive cataloging of facts of a fictitious world, but with little actual criticism of the sort that one saw in the great days of the printed fanzines.

You, Andrew, are one of the last, best hopes for the fan as critic.

At the risk of sounding very dim, I’ve downloaded both the 1-1 and 1-2 versions, and can’t read either; despite reinstalling Adobe Reader just in case, all I get is “There was an error opening this document. The file is damaged and could not be repaired.”

Can anyone more tech-savvy than me suggest what I may be doing wrong? At least with old paper fanzines when the pages stuck together in the rain, you could waft them gently in front of a heater and then prize them apart when they’d dried ;-)

I've just double checked and the uploaded file is OK, which exhausts my list of ideas about what could be wrong.

Is there a computer geek in the house? (I'm guessing yes.)

That's quite a tour de force. I suspect Pratceht pulled something very like a Stan Lee on Fantasy.

Some very nice phrases, esp. Tinky Winky pointing to the boarded up shp.

For example, when knights and pirates feature in children's books, it's for comedy relief, but most children have no conception of the originals. Bugs the hell out of me.