The Terrible Threat of the Living Brain. 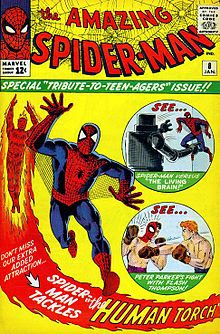 Observations:
The referee in the boxing match is presumably the aforementioned Coach Smith.

Mr Petty refers to the machine as an "electronic brain"; the term "computer" isn’t quite current.


This is the first issue in which neither Aunt May nor J. Jonah Jameson appear as characters.


Parker’s specialization: The representative from ICM is surprised how much Peter Parker knows about electronic brains.


Spins a web, any size: Spider-Man spins a huge spider-web that blocks a whole doorway.

This issue sticks out like a moderately sore thumb in the first run of Spider-Man stories; almost as if it were a pilot for a reboot that never happened, or a change of direction that never went anywhere. It's set entirely at Peter Parker's school; neither Aunt May nor Jonah Jameson appear. It's shorter than usual, leaving room for a 6 page filler which I suppose we’ll have to talk about in a moment. Lee says on the letter page that it was a "change of pace" and promises to be "back on track" next time.

I wonder if cancellation had been looming again, and Lee was preparing to re-launch Spider-Man in an anthology title? Or did he have the Torch strip lying around and think that it made economic sense to use it? Or was there a scheme for a Spider-Man-at-school spin-off title? I cannot believe that these stories were written with a “tribute to teenagers” special in mind. On the basis of this comic, teenagers mainly call one another names and have fights. Some tribute.

Think of Buffy the Vampire Slayer: objectively the greatest genre TV show which doesn’t have naked people and dragons in it of all time. Buffy spends her first four seasons slaying vampires mainly within the confines of her high school. The weekly battle with a supernatural monster generally ironically reflected whatever personal issue she was dealing with in the same episode, so if she was struggling to see the point of a history exam she might find herself dealing with a monster who was endlessly doomed to repeat the mistakes of the past. This kind of thing almost never happens to Spider-Man: in fact, it is surprisingly rare for the threat which he is is facing to impact directly on Peter Parker at all. Certainly, this issue consists of two separate plots, rolling along in parallel, bumping into each other at key moments and leading to a farcical conclusion. 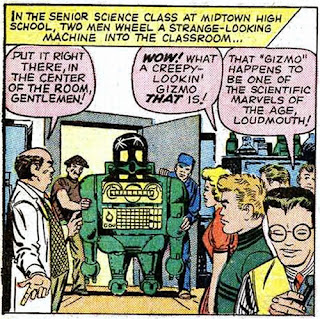 So: in the first plot, Dr Petty from the "International Computing Machine Corporation" demonstrates his "electronic brain" to Peter Parker’s science class. It’s a beautifully Ditkoesque creation, very much the sort of thing which would have appeared in Amazing Adult Fantasy — like a toy robot, but not quite like one. It runs around on ball bearings and has claws exactly like the ones on the end of Doctor Octopus’s arms. Two goons (and can’t Ditko draw a lovely bad guy, the fellow on the left looks more like one of the Mole-man’s troll creatures than an actual human) decide to steal the machine and use it to "figure out horse race winners, elections, anything". While they are trying to steal it they accidentally "bump into the control panel" causing it (and I hope you are keeping up with all the scientific jargon) to "short circuit". The machine runs amok, and there is a big fight, up and down the corridors of the school. The Brain, while not evil, is able to learn Spider-Man’s moves and avoid him. In the end, Spider-Man — or rather, Peter Parker — outwits the machine, removing the control panel and flipping the cut off switch.

In the second plot, Flash Thompson and Peter Parker are trading insults, as usual. When they very nearly come to blows, Mr Warren suggests they have an actual fight in the gym. Everybody else thinks that poor, weak Peter will be creamed by Flash Thompson, but Peter’s main worry is how to avoid killing Flash with his spider-strength. First, Peter pulls one of his punches but still knocks Flash through the wires; then, trying to give him just a little tap, he knocks him clean out. The kids, all routing for Flash, think that Peter cheated; but Flash knows better. Peter Parker is just pleased that he finally got the chance to "wallop" Flash (an oddly juvenile word when applied to two young men having a refereed fight in a boxing ring.)

Some of the world’s silliest jokes involve telling the listener something in the first line, leading them in a completely different direction, and then delivering a punchline which takes them back to where they started. (*). This story is structured exactly like one of those jokes.

Mr Petty wants to demonstrate the Brain’s problem solving ability, so the kids challenge it to work out Spider-Man’s real identity. This is set up as the big crisis of the story: Peter is really worried about what will about if the Brain works out that he's Spider-Man. Flash tries to take the print-out from Peter, which is the flash-point for their fight. But the boxing match, and the fight with the robot distracts the reader’s (and all the characters') attention away from the question. At the very end of the story, the two goons run into the locker room and trip over Flash (who is recovering from being punched by Peter) making it appear that Flash overpowered them both. This enables Peter to deliver the punch line — quite obviously, Flash Thompson is Spider-Man. ("If they keep it up, Flash’ll end up believing it himself" grins Peter Parker.)

Many reader’s think of this as a below par issue, but I’m rather a fan: I like the sense of fun and the relative lack of angst; Peter Parker in his natural environment, and the sense that despite the monster and the fight, this is pretty much just "a day in the life" for a superhero.

At the end of last issue, Peter had his arm chastely round Betty’s shoulder, flirting among the filing cabinets. This issue ends with him walking home thinking "All in all, it’s been a mighty pleasant day". Other issues have ended with him crying; this one shows him whistling. A pleasant day involves fighting a dangerous non-human foe and punching another boy, quite hard. 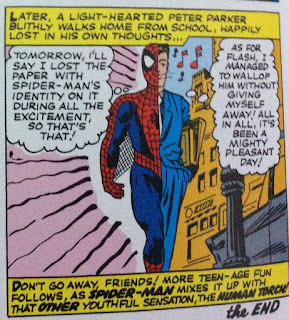 There have been two instances of the Gemini-face in this issue — when Parker decides not to replace his glasses, and when he is about to fight Flash and can’t work out how to avoid killing or injuring him. But this is, I think, the first time we have seen our hero’s whole body split in two, Spider-Man down the left side and Parker down the right. And the message is: Peter is fully at ease with being Spider-Man.

Yo Spider-Dudes. Give me some money. Do you think I do this for fun?

(*) So, a guy is driving down the fast lane of the motorway in his sports-car, when a three legged chicken cruises past him. Not quite able to believe this, the guy sticks his foot down on the accelerator, and chase the bird, which zooms along for a few miles, before exiting the motorway, running along several main roads, then turning off onto a B road, and eventually onto a winding single track country lane before coming to a halt in a the yard of a tiny little farm. “Ooo arr” says the farmer. “How can I be helping you, like?” (Did I mention he was Scottish?) “Well” says the man “I couldn't help noticing that your chicken has three legs.” “Ooo arr, we breeds em like that, me handsome” says the farmer. “You see, come Sunday lunch time, I likes a nice leg of chicken; and the missus, she's partial to a nice leg of chicken, and my strapping your song, he won't go without a leg of chicken either.” “And what does it taste like” says the man. “Dunno” says the farmer “Never caught one yet.”