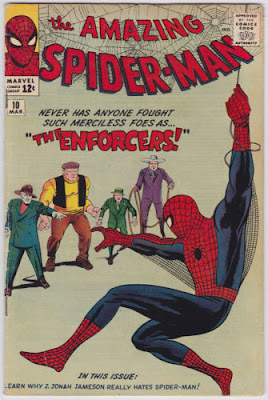 Aunt May’s next door neighbor is called Mrs Abbott (and not, for example, Mrs Watson.)

Stan Lee doesn't re-read old issues, but relies on his memory: he references issue #9 but says it is called The Wrath of Electro, rather than A Man Called Electro.

Following the fight in issue #8, Flash makes two more attempts to be nice to Peter: visiting Aunt May in hospital, and warning him to be careful about speaking of the Big Man in public.

He's got radioactive blood! Peter gives Aunt May a person-to-person blood transfusion, which is massively anachronistic in 1964. Peter has the same blood type as Aunt May, even though they are not blood relatives. This will become hugely significant the next time but one May is at death's door.

On the splash page, Spider-Man "possesses the strength of countless spiders"; on page 21, he "has the proportionate strength of a spider".

Spins a Web: Any Size: Spider-Man makes a web parachute and (briefly channeling his inner Bruce Wayne) a giant web spider to terrify a bad guy.

If Amazing Spider-Man #9  is a slice of spider-life; then Amazing Spider-Man #10 is as conventional a piece of story-telling as we've seen.  Indeed, it is hardly a Spider-Man story at all: if Parker had just been a photojournalist and the Enforcers had been more conventional hoods, everything would have unfolded in pretty much the same way. And this is no criticism. There is something gloriously surrealist about the way in which a small number of outlandish super-characters wander around a downbeat, realistic urban world and no-one pays much attention to them.

A big man named the Big Man has taken control of the Syndicate which controls all the Crime in New York. Or possibly America. Or maybe just Forest Hills. Taking over the Syndicate is a pretty simple operation. He just tells his three mildly super-powered hench-people to intimidate seven gang leaders who have kindly assembled in his office in order to be intimidated. They immediately hand The Mob over to him.

Traditionally, Organized Crime makes its money from illegal gambling, extortion, bootleg booze, ladies of ill repute and even drugs. But Ditko gives us a montage of The Big Man’s men cracking safes, robbing banks at gunpoint and hijacking security vans. Spider-Man's main job is arresting jewel thieves, so it makes sense that one tall man in a mask is in charge of all the jewel thieves in the country. The universe is Manichean conflict between Goodies (Cops) and Baddies (Robbers) and The Big Man has taken over the Thieves Guild. Over the next few months, the Green Goblin and the Crime Master are going to be pretenders to the same throne. One of Stan Lee’s first acts after Ditko’s departure will be to install the Kingpin as Top Crimer.

So: who is the Big Man really? J. Jonah Jameson thinks it is Spider-Man and Spider-Man thinks it is J. Jonah Jameson. If you approach the story as a puzzle, then the solution is almost painfully transparent. Out of the blue, Jameson has acquired a columnist named Frederick Foswell who writes editorials about how awful Spider-Man is at his bosses behest. He is a rather a little man. This is the first time any Bugle Employee, apart from Betty, has been given a name. I suspect I was typical of first-time readers in assuming that he had been mentioned before. Lee’s habit of back-filling means that when we are told that Jameson's top columnist is called Foswell (or that Aunt May's neighbor is called Abbot) we are inclined to say "oh, yes, and he always has been."

It shouldn’t be a great surprise that a brand new character, introduced on page 7 of a “whodunit”— the only person who isn’t part of the regular cast — should turn out to be the masked villain. It works a lot better than it ought. For one thing, it isn’t presented as a riddle-story: there is too much else going on for us to spend much time trying to guess the Big Man’s identity. We are fairly cunningly misdirected — or at any rate watch Peter being misdirected — into thinking that the Big Man is Jameson. We don’t ever get an explanation as to why Jameson is walking past the Big Man’s hide out right after Spider-Man’s first fight with Enforcers: in a proper whodunit, that would count as Cheating, but here we hardly notice. When it comes to the big revelation, we are more interested in Peter — and Jameson’s — reaction then we are with the trick about how Foswell was the Big Man all along. (He was wearing special high heels to make himself look taller. Duh!)

It really is a very elegant little tale.

The distinctly lackluster cover pitches the story as a straight fight between Spider-Man and the Enforcers. It oversells it quite heavily: apparently, they aren’t merely the most merciless foes Spider-Man has ever come up against, but the most merciless foes that anyone has ever encountered. Doctor Doom might have a word or two to say about that. So might Hitler. The splash page (as well as being a nicer piece of art) sells the story much better, with the main question not being "how can one lone crime-fighter hope to defeat the Enforcers" but “Who is the Big Man?????????????????” (17 question marks in original.) So once again, Ditko offers up a plot heavy, film noir suspense mystery tale, and Stan Lee promotes it as a wrestling match.

The Enforcers are, simply, the Big Man’s enforcers: three heavies who he uses to intimidate all the crime lords of New York and collect unpaid interest from teen-aged secretaries. Teams of villains are a tempting plot device for writers — rather than come up with a single, strong concept (a villain with wings, a villain with robot arms) you can bung three or more mediocre concepts together, and let them spend the issue trading wise cracks. So we have Very Strong Guy; Little Guy Who Knows Judo; and Guy With A Gimmick (a lasso). This leads to some very un-focussed scenes in which the villains take it in turns to describe their powers to Spider-Man. There is a big fight, but no distinct moment when the baddies get defeated. The Enforcers have not yet descended into bickering among themselves (as the Masters of Evil and the Frightful Four do incessantly). Stan Lee must have thought they were a good idea, because they make three return visits (although only as generic crooks to pad out another story.)  At least they aren't as irritating as the Circus of Crime.

The Amazing Spider-Man is supposed to be set in New York; but it really happens on a very small stage. Peter Parker brags about knowing the Big Man’s identity, and sure enough the Enforcers come along and kidnap him. Betty Brant owes money to a loan shark, and sure enough the Enforcers turn up at the Bugle and bully her — at the exact moment while Peter Parker is in the office. Last time around we learned that J.J.J. had a personal account in a Forest Hills bank, right near where Peter Parker lives — which was, of course, the first bank which Electro robbed! This could be seen as a Dickensian level of coincidence, or just very lazy plotting. But I think that we have to read Spider-Man with a kind of double-vision. At one level, yes, this is Noo Yawk, and Spider-Man’s enemies are the worst enemies in the whole wide world. But at another level, Spider-Man is a local hero who lives in a village, and his enemies, though threatening and scary, are not terribly important in the grand scheme of things. Jameson is editor of a local newspaper and there is a local school and a local college and doubtless a friendly neighborhood grocery store as well. That’s why Jameson cares so much about Spider-Man and so little about, say, Ant Man. Spider-Man is making a big noise in his village and Jameson would like him to get off his lawn. 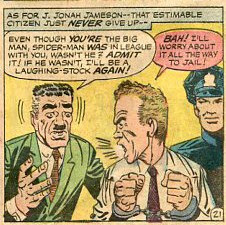 Last time, Spider-Man removed Electro’s mask and didn’t find anyone very interesting underneath. "Who is Electro?" was one of the big questions that no-one was really asking.  This time, the question “Who is the Big Man?????????????????” (seventeen question marks) is shouted out on the first page, and to some extent drives the action. We are misdirected into thinking that he is a regular member of the supporting cast; but (in a sort of kind of twist) find out that he is the guy we only met this issue. But if anything, the big twist — the kind of thing that Stan Lee means when he talks about the realism of the comic — is that the hero completely fails to solve the mystery. "Some big brain I am." says Spider-Man "I not only have the proportionate strength of a Spider — I'm just about as dumb too!"

As we've seen, this was to become a point of contention between Lee and Ditko. Ditko thought that in real life the bad guy never turns out to be old Mr McGrath who runs the funfair. Lee thought that stories needed better payoffs than real life. The same kind of thing will happen in issues 26 and 27. And then... Well, on one account, then there will be a big argument and the partnership will come to and end.


We are getting ahead of ourselves. But spiderphiles who know what I am talking about should take a long hard look at Frederick Foswell’s haircut.

Please consider donating $1.00 a month to keep the writer of this blog in cups of coffee.
Posted by Andrew Rilstone