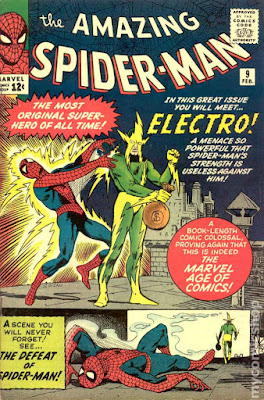 “Although we know so little about Spider-Man, he’s always been on the side of the law”. The idea that there was a federal warrant for his arrest has been completely forgotten.

”I know it’s bad manners to drop in without an invitation, but I’m sure you’ll forgive me this once”. Spider-Man’s banter is notably less irritating this time around.

Spider-Man's red socks are separate from his blue tights. (And they are light enough to slip rubber shoes over!)

If Betty left high school "last year" then she must be around 17. Editorial comments on the letters page suggest that she is slightly younger than Peter.

Aunt May’s first illness! Up to this point, she has been represented as elderly, but not especially sick or infirm.

Guess Aunt May’s Illness! 1: It’s only symptom is fatigue. 2: It is rare  3: It requires medication, and the slightest delay in administering medication might be fatal. 5: It requires a major blood transfusion 6: Surgery returns the patient to full health in a matter of days.

Peter Parker’s Financial Position: Parker sells fake pictures of Spider-Man for $1,000: Jameson says they are really worth $20,000. The $1,000 pays for the specialist surgeon. No other medical fees are mentioned.


He can climb up walls; he has a spider-insignia on his costume; he'll soon have little spider-shaped tracking devices. But there is nothing particularly spidery about Spider-Man. He can indeed spin a web (any size) but real spiders mostly use their webs for trapping flies rather than making swamp shoes and canoes. Spiders aren't know for being strong and agile, and certainly not for having a telepathic radar sense.  If Stan Lee had chosen a different name, most of the stories would have panned out very similarly. Fly-Man or Cockroach-Man might still have spotted that if you are going to touch a villain called Electro, some heavy duty rubber gloves are probably in order.

But at a deeper, thematic level, "spiders" pull these comics together in a way that flies or cockroaches could not have.

We’ve already noted one example. In almost every episode, Spider-Man is defeated in his first confrontation with the bad guy, but comes back and beats the baddie on the second attempt (usually by thinking the situation through more carefully). Sometimes, it's a huge defeat; sometimes, a mere tactical withdrawal: but it always happens. So this month, Spider-Man is knocked out the first time he touches Electro's. The cover screams "the defeat of Spider-Man" but it isn’t that big a deal — he gets a bad shock from the electrically powered bad guy, but he recovers, and before the next battle he nips into a hardware store for some insulation. The moral — the one that the Human Torch hammered home in that school assembly — is "if at first you don’t succeed, try, try, try again."

British school kids, at any rate, would instantly associate this maxim with the story of Robert the Bruce who is said to have been hiding out in a dour Scottish cave after having lost a couple of battles. According to the tale, he sees a spider trying to spin a web across the cave. The little arachnid fails twice, but succeeds on the third attempt, inspiring the Scottish King to have one last go at sending proud Edward's army homeward tae think again.


The splash page of Amazing Spider-Man #9 is more or less the best thing that Steve Ditko has contributed to date, which is to say, more or less as good as comic-book artwork gets. Some Ditko splashes are simply the first frame of the story; some are teasers – showing you a scene that will come later in the story. But what he does best is symbolic splash pages like this; abstract visualizations of the entire episode.

At the center of the picture are Peter Parker and Spider-Man: another full-body Gemini-split. This was how we left our hero at the end of issue #8, walking home after his mighty pleasant day. But here he looks panicked, scared. He’s definitely not whistling. He's surrounded by 20 or so faces: like one of those crowd reaction scenes which Ditko was so fond of. But there are not everyman faces but people we recognize: Aunt May, J. Jonah Jameson, Flash Thompson, Betty Brant.

And (although I think I missed this fact for thirty five years) some of them appear twice.

That’s the genius of the scene. The faces on the left are looking at the Peter Parker side of the equation: Jameson looking indifferent; Betty smiling; Aunt May reaching out to him; the school kids looking hostile. The faces on the right are looking at the Spider-Man half: J.J.J. angrily denouncing him and (very sad and subtle this) Betty turning her back. There is a rather ambivalent collection of Ditko "men in the street": a woman in a ridiculous hat, obviously disapproving; a kid, obviously excited and an absolutely delightful cop who is stroking his chin, not quite able to make up his mind. In the bottom left (opposite poor Aunt May) shadowy figures representing the underworld are shooting at him. It would be over-egging the pudding to say that the fellow in the hat, who seems to be about 100 year old, more like a goblin than criminal, looks a lot like the Burglar, transformed into a bogeyman in Spider-Man’s imagination.

This isn't merely a symbolic representation of issue nine: it's a visual manifesto for the next dozen episodes of Amazing Spider-Man. Up until now, the Gemini Face has represented an internally divided self: the fact that one guy has somehow to be both shy Peter and arrogant Spider-Man. But Peter has chucked his glasses away and unified the two sides of the face; the stories, from now on, will be less about Parker's state of mind and more about the social world he inhabits; how presenting as two different people affects his human relationships.

Spider-Man now has a fixed supporting cast of five characters: J. Jonah Jameson, Aunt May, Betty Brant, Liz Allan and Flash Thompson. These five characters are increasingly going to form the matrix of the stories — a sophisticated plot-generating engine. Although I don’t think that Ditko ever went quite this far, you could easily imagine the splash from Spider-Man #9 redrawn, with each of the quintet having a different reaction to Parker and Spider-Man.

LIZ: Looks down on Peter. Has crush on Spider-Man.

"Very probably, Andrew" I can hear you saying "But what does any of this have to with spiders."

Simply this. If the first moral lesson that school children learn from spiders is perseverance – "if at first you don’t succeed, try, try, try again", the second is certainly honesty. "Oh what a tangled web we weave when first we practice to deceive."

Which also comes from a story about Scotsmen, oddly enough.

Matt Dillon is struck by lightening while fixing electrical cables and finds that the two charges have canceled each other out. As you do. He discovers that he can throw sparks when he puts his hand through a wire coat hanger (what?) and makes himself a mesh suit which he wears under his costume (shades of 50 Shades of Grey!) His body is now a "living electrical generator" but he also seems to use some kind of electrical generator to charge himself up. The Science of all this is more than usually confused.

Despite making himself a natty little yellow and green costume, and imaginatively calling himself "Electro" hes doesn't engage in any electricity themed naughtiness. He robs a bank, and then decides (for no reason at all) to free some criminals from what is quaintly described as the House of Correction in order to "get them to be my flunkies". Stan Lee just takes it for granted that if you get superpowers, then naturally, what you will do is rob banks. Unless you are one of those ones who think it’s your duty to stop other people robbing banks.

But Electro is really only a sub-plot to this issue. Or, more accurately: Electro is one of three plot threads running side-by-side. Aunt May’s illness is one plot; Peter’s relationship with Betty is another; Electro’s attack on the house of correction is a third. The threads get tangled up, of course — Betty kindly supports Peter during May’s operation; Peter has to go and fight Electro to raise money for May’s operation; Betty is angry that Peter went to photograph the prison riot after she'd asked him not to. But there is no big unifying moment. Electro entirely refrains from causing any power-cuts while Aunt May is plugged into life-support.

I think more than anything else this is what made me fall in love with Spider-Man. There is a six panel sequence (pages 5 - 6) in which Spider-Man goes out looking for criminals (to photograph). He gets caught in the rain; rinses out his wet costume in the sink; and nearly gets spotted by his neighbors when he hangs it out to dry. Nothing comes of this scene: it doesn't lead anywhere – it's just there. I suppose you could summarize the plot if you really wanted to: "Jameson is convinced that Spider-Man is Electro. Peter fakes incriminating pictures to pay for Aunt May’s surgery. Jameson is angry, but forgives him when he supplies better, genuine pictures, but now Betty is angry that he went on such a dangerous assignment." But that doesn’t really convey the tone of the episode at all. It just feels like a mesh or network of events.

What’s another word for a mesh or a network? Ah yes. A web.

"Life sure is funny!" say Spider-Man, after spraying Electro with a fire hose because, quote, electricty and water don't mix. "One of the most powerful criminals of all time! And what finally beat him! Just a dousing from a plain, ordinary, water hose.” In the very next panel, he unmasks Electro and complains “If this were a movie, I’d gasp in shock and then I’d say 'good heavens! The butler!'  But this guy I never saw before.” It's never clear whether moments like this should be seen as Stan Lee congratulating himself for being so clever, or Stan Lee ticking off Steve Ditko for being so boring; but it's certainly true that A Man Called Electro doesn't have a big pay-off.

The question of whether Amazing Spider-Man should be more like a movie ("good heavens! My best friend’s father!") or more like real life ("this guy I never saw before!") is one that Writer Guy and Artist Guy were never going to agree on. But for the next year or so, to read Amazing Spider-Man is to fall into the flow of Peter Parker's life and stay there for a few hours.

Not stories. Life. One thing after another.

I'm reading Alan Garner's 'The Weirdstone of Brisingamen' and at one point a creature's habit is described as "[...]ill concealing the terrible thinness and spider strength of the body beneath." The book was published in 1960, two years before the debut of our favourite wall-crawler, so it seems in the 1960's people thought of spiders as possessing great strength.

Thank you for that.Following up...