The Coming of the Scorpion 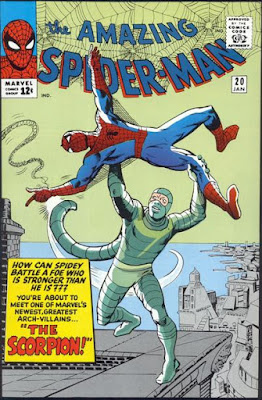 Observations
The page count of the story drops from 22 to 20 from this issue.

Spins A Web, Any Size — Spider-Man uses a giant web bat to distract the guy tailing him (the same kind he used to disrupt the Torch’s party in #8.)

Aunt May's Condition: For the first time, Aunt May is said to be too frail to stand the shock of finding out Peter Parker is Spider-Man. “If only she were younger…if she could stand the shock…I’d reveal my other identity! But I dare not take a chance!” This will the main rationale behind Spider-Man's dual identity for years to come.

P3 Spider-Man is shown running along telegraph wires near his home — Ditko has realized that web-swinging in Forest Hills makes no sense.

P5 “Mr Jameson is sending me to Europe to cover the disarmament conferences.”

There was indeed an Eighteen Nation Disarmament Conference going on in Geneva at this time. (It went into recess in September '64 and started up again in July '65.)

It would currently take 25 - 40 minutes to drive from Madison Ave to JFK Airport; more like 80 minutes by bus. (Neither Peter, Ned or Betty appear to have their own car.) Note that New York Central Airport had been renamed after President Kennedy as recently as December 1963.


P6 “Mutated is not the exact scientific word”.


According to the X-Men, a mutant is by definition born with superpowers Gargan is turned into a Scorpion my means of a "serum".

p11 “His potent Spider-strength temporally dormant.”
“His awesome energy which is slowly returning”


Some of the clearest confirmations that Spider-Man channels his strength from outside himself — it isn’t a physical enhancement.

P17 Note that Jameson is so worried about the Scorpion that he has changed his green tie for a red one.

“It's time to dream up another great new Spider-Man villain. But how can we possibly follow someone as awesome as Kraven?”

“How about a strong guy in a green suit that makes him look like Tigger!”

"And the twist is that a side effect of the potion is that the strong guy in the green suit with the tail coming out of his butt....????"


There are not many issues from the Lee/Ditko run that I would happily strike from the canon, but this is one of them. (*) The art and the dialogue feel perfunctory; the villain is unimaginative; no-one seems quite to be acting in character; and plot-lines introduced in the last issue are hurriedly closed off. It is hard to resist the idea that the story originally intended for #20 was shelved at the last minute, and that this is a hastily-conceived filler.

If you attempt to treat the end of issue #19 and the opening of issue #20 as a continuous narrative, the problems are obvious. Peter Parker sells J. Jonah Jameson a full photographic record of Spider-Man’s fight with the Enforcers. Jameson declares them sensational, and adds “I don’t know how you got them…and I don’t care.” He cares so little that as soon as Peter leaves the room he calls up two investigative reporters and tells them to find out how Peter Parker got the photos. The first of the reporters (who smokes and wears a nicely inconspicuous purple suit) is on the job by 3.30 PM. He trails Peter Parker from school to Aunt May’s house and waits there until both Peter and May have gone to bed. He calls up Jameson, who has gone home and changed into a green bathrobe, to report that he has nothing to report.

Jameson appears to already (in the last twelve hours) have worked out a theory about the source of Peter Parker's photos, and has formed a very definite plan about what he will do if the reporter's evidence confirms it:

"I’ve got to know for certain! And then…when I’m sure…I’ll act!”

He tells Purple Suit Guy to carry on watching the Parker house until he is relieved, which must happen early the next morning. A second reporter (who doesn’t smoke and who wears a green suit) follows Peter to school, but Peter spots him on the way home. (Presumably Green Suit Guy is less careful than Purple Suit Guy.) Quite late in the evening — after Aunt May is in bed — Parker briefly distracts him with a web-bat so he can get into the house as Spider-Man. The next day, Green Suit Guy (now identified as Mac Gargan) follows Peter to school and then to the Daily Bugle offices. (Note that Parker, knowing his is being followed, must make the journey from Queens to Madison Ave on foot or by subway: Gargan can't see him web-swinging, or the game would be up.) At the Bugle offices, Gargan, reports back to Jameson. But Jameson has changed his mind again. He doesn't care where Peter Parker’s photos come from after all!  He has decided to turn his employee into a giant scorpion instead!

Anyone can see (although I think I am the first person in the last half a century to come right out and say it) that Spider-Man #19 sets up one plot  — a mysterious figure in green sending agents to follow Peter Parker around the city — and Spider-Man #20 abandons the plot immediately and substitutes a lackluster “Spidey vs Some Villain” story instead. I don’t believe that Stan Lee would end one issue literally on a big question mark ("Who is the new and different menace about to enter the life of Peter Parker?”) only to reveal that he’s the not at all new and not particularly different J. Jonah Jameson 5 pages into the next one. I don’t believe that Stan or Steve would introduce the idea that Jameson had started to suspect that Parker is Spider-Man if the only resolution they could think of was “He gets bored and doesn’t pursue it.” And would Stan really have penned that “I don’t care how he does it!” bubble for Jonah if he was about to reveal that he really does care, quite a lot.  (He could comfortably have fitted: “How does he do it…! I’ve got to know…?? And I know just how to find out..!!!” in the same space.)

Was Steve going somewhere with the Mysterious Following Guy, and did Stan veto his idea, forcing him to produce a fill-in villain in a hurry? Is it even possible that the full panel question mark — a motif which never occurs in any other Ditko/Lee comic — was drawn in after the fact to cover up a panel which hinted at the vetoed plot development? Who knows, perhaps if we could get our hands on that original artwork and steam-off the question mark, we would discover a panel in which which Bathrobe Guy turned to the reader and announced "...And so the Green Goblin will have his revenge at last!!!!!!"

So much for the inept segue. But to be honest, there isn't much else to say about this story. Farely Stillway is clearly an alchemist like Curt Connors: he makes potions that enable fish to climb trees and rats to breath underwater. (Some people say that the picture of his lab is so spooky that it makes up for the rest of the issue by itself. They are wrong.) But unlike Connors, Gargan doesn't become half-man / half-beast monster; he simply becomes really, really strong. Realizing that this isn't scorpioid enough, Stillway also magics up a prosthetic tale that Gargan can control telepathically and the single least imaginative costume of any Spider-Man enemy to date. (Credit to Ditko for drawing in a mechanism that runs from Gargan's neck to the base of his spine, largely avoiding the sense that this month’s candidate for the supervillains' hall of fame is attacking Spider-Man with a prosthetic backside.) Like the Lizard, the Scorpion somehow has "all the powers" of his totem-animal: so although his hands look exactly like anyone else’s hands, they can cut through Spider-Man’s web like a scorpion’s pincers.

Stillway warns Gargan that the experiment may affect his brain, but Gargan doesn’t mind, because he never uses it anyway. (I paraphrase.) But the intriguing idea that we are going to end up with a thug with an insectoid mind is rapidly replaced by boiler-plate Stan Lee waffle. “His body has attained the maximum degree of superpower! His brain as been subtly altered until is standards are those of a predatory beast! He has become the living embodiment of evil!!” The Code wouldn't have allowed Satan to appear in a comic, but it is still a bit of a let down when the living embodiment of evil talks and acts very much like every other Spider-Man bad guy. ("Jameson is the only one living who knows by secret identity! With him out of the way, my secret will be safe forever! It shouldn’t take more than a few minutes!”)

The sense that no-one's heart is quite in this tale is underlined by the rather pedestrian feel of the fight scenes themselves. Spider-Man’s costume gets ripped to shreds and he is seen rather dramatically lying in a pile of wreckage, but there is no sense of there being anything particularly impressive or savage about the fight. In the first round, the Scorpion punches Spider-Man repeatedly and pushes him off the roof. In the second, Spider-Man rips the Scorpion’s tail off; and then punches him until he falls over. Even the dialogue is less sparking than usual:

“Being you’re such a glutton for punishment, I’ll make it worth your while!”

“A fat lot of good that’ll do you! I’m stronger than ever now…as you're gonna find out.”

“Jameson tries to find out where Parker gets his pictures from” is a good idea for a story. “Jameson sponsors the creation of a new super-villain who beats Spider-Man on the first go but loses on the second go”, not so much. The idea of J.J.J. sponsoring a villain will be handled much more interestingly in issue 25, which very sensibly pretends this one didn’t exist.

(*) "The Terrible Threat of the Uncanny Tinkerer" and "Spidey Tackles The Torch", obviously.