Where Flies The Beetle...! 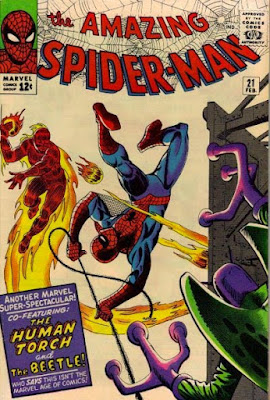 Spins a web, any size:  The Torch and Spidey do their usual routine in which the Torch shoots fireballs at Spidey and Spidey throws web balls at the Torch. (Spider-Man claims they are “asbestos web balls”, by which he presumably just means they are fire-proof. The Beetle claims to have "asbestos armour" on page 19).

Spider-Man also flips the fireballs with ping-pong bats made of web.

p 6 “I couldn’t win a popularity contest even if I was the only one entered! Nuts!” It isn’t clear whether losing a popularity contest to Khrushchev is worse than losing one which you are the only entrant. “Nuts!” is a fairly mild swear-word to use when no-one is listening but it’s an improvement on “suffering spider-webs”.

p 6: “He’s so cultured and down to earth…” By “cultured” I think Dorrie means “good mannered”. Although he is a straight-A student and has presumably studied music and literature, Peter has never shown any particular interest in the arts before.

“It would be wonderful if some of his poise and polish were to rub off on you” This recalls Betty Brant’s comments about Peter’s new-found inner confidence a couple of issues back. We’ve come a long way from Peter the shy wallflower.

p8 “Well, I’ll be spider-webbed string-bean.” A string-bean could be a vegetable, a banjo player, or a thin guy. Spider-Man doesn't seem to mean anything specific by it.

“You’re probably wondering where we go from here with Spidey!” writes Stan Lee on the letters page in Amazing Spider-Man #22 “Well, if it’ll make you feel better, we’re wondering too.” Hype, of course, albeit a sort of reverse psychological hype. But there is an overwhelming sense that after Ditko effectively brought the Story of Spider-Man to a satisfying conclusion in issue #18 and #19, the comic spends three or four issues marking time searching for a new direction. The action is fun, the villains are evil, but nothing very interesting can happen to this self-confident, self-assured Spider-Man.

Where Flies the Beetle is a distinct improvement over the The Coming of the Scorpion. It follows the characteristic Ditko pattern of interweaving a number of plot lines relating to Spider-Man and Peter Parker, rather than Lee’s characteristic build up to a fight. But it doesn’t make much use of the familiar Spider-Man plot engine. Liz and Flash are barely present; Aunt May appears for literally one panel. The main soap operatic impetus comes not from Spider-Man but from his guest-star. This is the Human Torch’s ninth appearance since Amazing Spider-Man started, but we won't see him again until #77.

When the Torch appears in Amazing Spider-Man he is generally represented as an entitled, slightly arrogant, but very competent celebrity, who Spider-Man resents because of his own relative obscurity. In this final appearance, the Torch is much more as he is in his own solo-strip in Strange Tales: a teenage high school student who happens to have a superpower. (In the early Strange Tales appearances he even had a secret identity, kind of.) Flash and Peter regard him almost as "one of the guys"; Betty doesn’t have any idea who he is. You could easily run away with the idea that he’s a fellow student at Midtown High. (Actually, he lives in Long Island with his sister and commutes to the Baxter Building.)

Continuity is vague. Jameson hasn’t changed as a result of accidentally unleashing a super-villain last month; Betty, who was angry with Peter from two-timing her with Liz (which he wasn’t) is now angry with Peter for two-timing her with the Torch's girl-friend Dorrie Evans (which he obviously isn’t). Even the partial reconciliation between Spider-Man and the Torch in issue #19 is placed on hold. It’s like we’re slipping into superhero non-time: Betty is always surprised and shocked that Peter is dating someone else; the Torch and Spidey are always feuding… 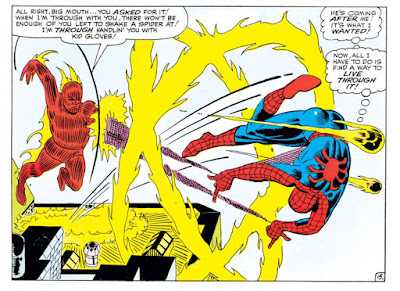 The plot is pretty much a text book romance comic: you could substitute any other characters and it would come out much the same. Doris Evans is cross because her boyfriend Johnny Storm keeps running off to be a superhero during their dates. (This was somewhat foreshadowed in Amazing Spider-Man #17.) She extracts a promise from him that he won’t “flame on” during the next 24 hours. By an astonishing co-incidence, an old Strange Tales baddie called the Beetle has just got out of jail and hatches a plan to get his revenge on the Torch. By another astonishing coincidence, Peter Parker has an entirely innocent meeting with Dorrie; but Dorrie, being a minx (like all gurls) goes out of her way to tell Johnny what a nice boy that Peter Parker is. So Johnny storms off to to tell Peter Parker to lay off his gal.

We have seen that the Spider-Man plot-machine relies on Flash, Liz, Betty and Jonah all knowing our hero as Spider-Man and also as Peter Parker. Rather implausibly, Dorrie Evans and Johnny Storm are also brought into this mechanic: Dorrie bumps into Parker in the street and thinks he is nice, but is terrified of Spider-Man; the Torch knows Spider-Man as a fellow crime-fighter and thinks of Parker as a nobody who is hitting on his girlfriend. (The Torch doesn’t remember Peter from when he came and gave a talk at his school; Dorrie doesn’t remember Spider-Man from when he gate-crashed her party.)

And so, the inevitable confrontation between the Johnnie Storm and Peter Parker. Peter and Betty are looking in the window of a pet-shop, which is what passes for a date, when along comes the Torch and starts berating Peter. (Peter’s response to Johnny’s “do you know who I am?” is one of the best ever bits of Spider-Snark. “Sure! Either you're the Human Torch or some jerk walkin’ around in his pyjamas! Or maybe both!”) As if by magic, Flash and his cronies appear. This gives Jealous Betty the impression that Peter has been dating Dorrie behind his back. (How does Johnny know where to find Peter? And would a big-league superhero really go after a high-school kid in that way?)

Parker promised himself two months ago that he was going to stop being so self-pitying from now on: and he initially reacts to the new situation with rage (crushing bricks with his bare hands) and then sensibly decides that he doesn’t really care what Johnny Storm thinks of him anyway. However where the Human Torch is concerned, Spider-Man hasn’t sworn off acting like a dick. “If he’s jealous of Peter Parker, how would he feel if Spider-Man made a play for his gal?”

Although much is made of Marvel Comics' popularity with teenagers, I can't help thinking that this is romance as imagined by kids who are far too young to date. No-one is looking for sex, thank you Comics Code; no-one thinks about marriage; no-one even kisses. Romance is a kind of a game, in which the main object seems to be to make the other side jealous. Men compete for women; women sulk when it looks like the men are cheating on them. In fairness, the men are mostly schoolboys, with homework, detentions and playground fights to worry about: the women often have the grown-up jobs and responsibilities.

Implied sexism apart, this is an impressively put together piece. It’s in the same farcical vein as The Return of the Green Goblin (although without any of that story’s emotional impact). Parker meets Dorrie by accident; the Torch threatens Parker because he thinks he’s hitting on her; Spider-Man goes back to Dorrie’s to needle the Torch and finds the Beetle already there; the Beetle and Spider-Man have a fight; the Beetle runs away with Dorrie; the Torch turns up, finds the place trashed, and assumes Spider-Man did it; Spider-Man chases the Beetle, the Torch chases Spider-Man, eventually the two of them join together and defeat the Beetle. It is not a vintage fight, but Ditko has some fun with the three pronged brawl: at one point the Torch flames the Beetle, the Beetle brings the ceiling down to squash the torch; and Spider-Man fall through right in between them. (Interestingly, the cover shows Spider-Man caught in the crossfire between the Torch and the Beetle, where issue #17 showed the Torch caught in the crossfire between Spider-Man and the Goblin.)

As ever, the payoff to the fight is a bit of a let-down. It rather feels as if everyone spars and then Stan Lee declares Spider-Man the winner on points. Spider-Man catches the Beetle in his web, the Torch makes a cage out of flame, and then somehow, off stage, Spider-Man puts him into a web cocoon. The obvious moral — that Spidey and the Torch work better as a team than as opponents — is not drawn.

In the final panels the new, non-whiny Peter Parker has a moment of insight which establishes the foundations of a “new normal” for the character. “I wonder if the world will ever acclaim me as it does others? Or am I always to go through life shunned and loathed! If only I could reveal my secret identity…if I could let people realize who I am…! …But I just don’t dare!” This is a call back to last issue when he wished he could share his secret with Aunt May, but felt that he “couldn’t take that chance”. This is going to become a major strand of the story-machine from now on: Peter Parker’s life is full of problems because of his double identity; but he cannot go public because the shock could kill Aunt May. It’s a bit of a hand-wave, but it will do.

There is nothing wrong with this issue. It’s a lot more fun than a lot of what Marvel put out in the same month. (Gregory Gideon, anyone?) and streets ahead of the Distinguished Competition. Spider-Man could have rolled along happily for decades in this format: the snarky teenager, the jealous girl-friend, endless sparring and rescuing and thief-catching. But there is no question that the temporary exorcism of whiny Peter has made Spider-Man a less complex and therefore less interesting character.