The Comedian is alive and well and living in a parallel universe.

He tries to kill Ozymandias while Ozymandias is talking to Lex Luther.

I remember Superman Versus The Amazing Spider-Man.

That was what it was called. Not “Superman and Spider-Man meet” or “Spider-Man vs Superman.” Superman Versus The Amazing Spider-Man. A huge over-sized thing, with a long title, costing ten times what a normal comic cost.

I read it over and over, twenty or fifty times, the most times I have read a comic apart from Spider-Man Comics Weekly #5 or the Star Wars Treasuries. 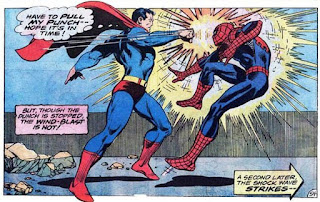 Did I even know who Superman was? I suppose there were annuals, and second hand imports in markets, and a TV cartoon, voiced by your actual Bud Collyer, so I knew the basics. It was a smart piece of work: it knew what Superman Versus The Amazing Spider-Man had to deliver and by Rao it delivered it. Rather pointedly it started with a standard issue Spider-Man solo story of the period and followed it up with a standard issue Superman story so we could see how different the two guys were before we saw them together. Spidey sent Doctor Octopus back to prison and Superman sent Lex Luther back to prison and the two villains ended up in the same prison plotting a horrible revenge. When Peter Parker and Clark Kent both end up at the same newspaper conference there is a massive misunderstanding which results in Spider-Man punching Superman. Kryptonite becomes involved. But they make friends in time to join forces and foil their respective villains. Lois Lane and Mary Jane have a girly chat, and J. Jonah Jameson talks photographers and news reporters with Perry White in the bar.

There is no reason why this kind of thing can’t be a lot of fun. Comic book universes thrive because we already know the characters: Spider-Man reminds us of every Spider-Man story we have ever read and Superman reminds us of every Superman story we have ever read so naturally if you put both of them in the same panel our fan-emotions run off the scale. All the writer really has to do is play up the differences between the characters — have Spider-Man behaving in as typical a Spider-Man way as possible and Superman being as much like Superman as possible and then stand back and allow the stylistic clashes to emerge. And when you are done, put everything back in the box. Spider-Man meeting Superman is a one-off for our entertainment, not a stage in his character development. Marvel didn’t have a concept of Imaginary Tales back then, but Roy Thomas shunted Superman Versus The Amazing Spider-Man off to a parallel universe in the very first issue of What If…? Superman and Spider-Man could never really meet: Spider-Man lives in a much more realistic story-world than Superman and Superman lives in a much more heroic story-world than Spider-Man. That is kind of the point of them. 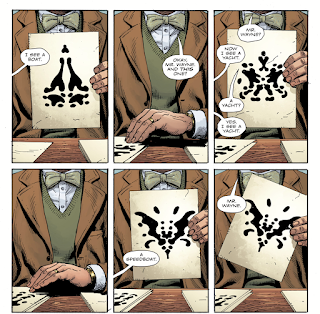 There was a good TV series a while back in which a policeman from a modern cop show got sent back in time and had to work with policemen from a 1970s cop show. The methods and attitudes of modern day policemen, and the style and assumptions of modern cop shows are ironically contrasted with the methods and attitudes and styles and assumptions of 1970s cop shows. They also did a 1980s version but that was boring. Why they didn't bring Gene Hunt forward to the present day I never understood.

So it could have been fun to take the realistic, grim, dark superheroes from Watchmen and dump them inside a traditional four-colour comic book universe. Part of the point of Watchmen was that superheroes had escaped from the printed page and got into the real world -- metaphorically, at least --  so a story in which those same superheroes somehow got trapped inside a comic would have been in keeping with Alan Moore’s metaphysics. But so far as one can tell, the mainstream DC Universe is now indistinguishable from the Watchmen universe. It’s grim, it’s dark, everyone is talking about corporate take overs, there are anti-superhero riots going on and no-one trusts ther Batman. That’s also very nearly the plot of the Superman vs Batman movie, which is as far as I have got with the DC Cinematic Universe. Wouldn’t it have been more interesting if Rorschach had met the square-jawed Adam West version of Batman? Then Ozymandias could have met Lex Luther the gangster who stole forty cupcakes. Or even Gene Hackman.

There was a comic where Miles Morales met Peter Parker, wasn’t there? It didn’t do very much except establish that the Traditional Marvel Universe was now just as realistic as the More Believable Ultimate Marvel Universe and that the latter therefore had no good reason to exist. Miles and Peter both now live in regular Marvel Continuity. They get on just fine.

So: Ozymandias and Rorschach go to look for the two smartest people on this new earth, namely Bruce Wayne and Lex Luther. Lex Luther seems to be part way between the corrupt businessman persona and the super-villain persona — he lives in a tower block and wants to buy out Wayne Industries, but he has minions who he keeps threatening to execute. I liked the Lois n’ Clark version better.

The real Ozymandias told Nite Owl that he wasn't a Republic Serial Villain. The line was changed to "I'm not a comic book villain" in the movie, presumably because most people wouldn't know what a Republic Serial was. Lex Luther actually is a comic book villain, but Doomsday Clock consistently encourages the reader to see him as the plausible figure and to see Ozymandias as a little absurd. “If you are the smartest person on your earth, I would hate to meet the dumbest” says Lex. The point of Watchmen is that Ozymandias creates a brilliant plan, but Rorschach (just possibly, we never know) spoils it by sending the confession to the conspiracy theorists. Everyone in Doomsday Clock seems to take it for granted that it was a bloody stupid plan from the beginning. (The plan is framed as “scaring everyone with an arse-faced squid”. No-one has grasped any of Alan Moore’s metaphors about fiction and reality and idea space.) This isn’t the wholesome proper traditional four coloured DC Universe fighting back against the much too dark, much too cynical Watchmen. It’s more like the DC Universe and the Watchmen Universe vying to see who can be more cynical. Watchmen is if anything the naive younger brother.

Meanwhile, Rorschach has found his way into Wayne Manner and discovered the secret entrance to the Bat Cave which rather charmingly is still hidden behind a grandfather clock. He goes down a long stone staircase rather than a bat pole. Batman still has Robin’s old costume in a tube and a gigantic American penny, but no dinosaur. Rorschach isn’t impressed by Batman’s collection of trophies. They eventually meet in the last panel.

Geoff Johns tries to imitate Alan Moore’s writing style, a little bit, sometimes. On the opening pages, Ozymandias monologues that if he succeeds in persuading Doctor Manhattan to save the world “we’ll all be heroes again” — and we cut to Marionette telling the staff in the bank not to try to be heroes. We watch the robbery on black and white CCTV while Ozymandias says that “nothing is black and white any more”. In Watchmen there was sort of a point to this kind of thing: Rorschach, Ozymandias and Doctor Manhattan all believed, in different ways, that there were connections between everything if you looked hard enough. In this context, it feels more like parroting a narrative tick.

There are several panels in which a psychiatrist tries to assess Bruce Wayne’s sanity using, you’ll like this, Rorschach blotches. The sequence very closely parallels (although, in fairness, it doesn’t directly quote) Dr Long’s interview with Rorschach in Watchmen #6. (The psychiatrist has a bow-tie like the prison guy, although his suit is plain brown rather than natty purple.) One of the blotches looks like a bat. One of them looks like the iconic “young Bruce looking at his dead parents” panel, although to be honest I didn’t spot this until Bruce has a flashback a few pages later. An one of them is possibly meant to look like the Comedian. Bruce says they all look like speedboats. This is reference for the sake of reference: a thing happens in Doomsday Clock which reminds us of a thing which happened in Watchmen. I suppose some of our memories of Watchmen are supposed to be transferred to Doomsday Clock; the one stealing the gravitas of the other. All it really does is piss us off.

The artist’s decision to stick with a 3 by 3 grid is trying to do something similar. It’s a big structural smoke signal that says “When you read Doomsday Clock, remember how good Watchmen was!” In fact, it mainly serves to remind us of how unlike Dave Gibbons’ Gary Frank’s art is. (I am prepared to concede that Brad Anderson colours a bit like John Higgins). Mercifully, Doctor Manhattan is wearing the same v-shaped thong he had on during the Vietnam sequences of Watchmen. (Marionette helpfully points this out.) Dave Gibbons slightly more cartoony art deftly sidestepped the problem of male nudity: we could see that Manhattan was stark naked without feeling that the picture was particularly indecent. I look forward to seeing how Gary Frank’s slightly more realistic art will deal with the Big Blue Penis Problem.

Everything now hangs on what Rorschach and Batman say to each other next issue.  Will we get a clever and witty scene in which both characters mutually critique one another? Or will they just endlessly quote lines from older, better comic books?

But honestly. The Comedian?

You could pledge $1 an essay to encourage me to carry on writing this stuff.

Or you could even buy a copy of the Best Critique of Watchmen Ever Written.