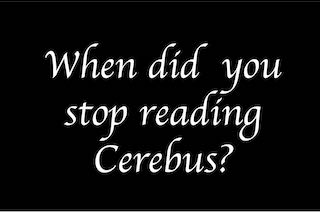 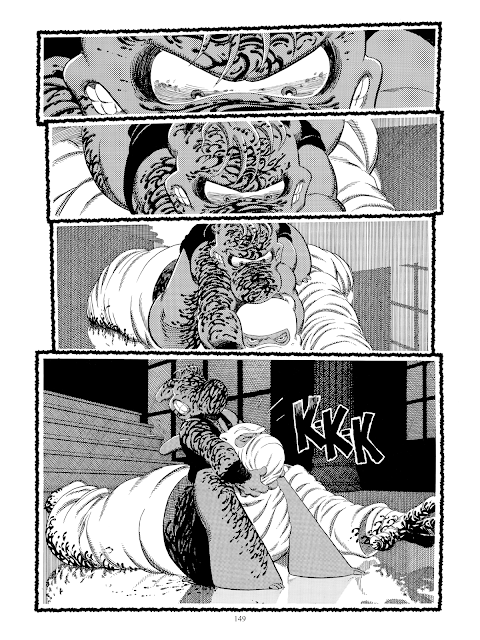 The sixth Cerebus sub-novel, Mothers & Daughters, ran from issues #151-#200. It was collected in four relatively portable volumes: Flight, Women, Reads and Minds. The fact that the spines say Women/Read/Minds is presumably sheer coincidence.
Very many readers who survived Melmoth quit during Mothers & Daughters. Specifically, they quit during Reads. Even more specifically, they quit after the final chapter of Reads, Cerebus #186: perhaps the most infamous comic ever published.
Before issue #186 Cerebus was a funny and sometimes challenging comic about an Aardvark barbarian in over his head in real world politics. Everyone read it. After issue #186 it was a weird ass philosophical screed: those of us who continued to read it became very defensive and apologetic. Before #186 Dave Sim had been an opinionated son-of-a-bitch who believed in self-publishing and hated the mainstream comic book trade; after #186 he was evil, mad, misogynist Dave Sim and even buying his comic book was seen as condoning or enabling him.
I don’t think he was ever evil; but then I don’t think anyone is ever evil. Mad is a nasty word, but I don’t think there is any question that Sim has suffered from mental illnesses. We can quibble about the word misogynist, in the same way we can quibble about words like racism and Islamaphobia. (“Well ACTUALLY I don’t have an irrational fear of Muslims, I merely said they shouldn’t be allowed to vote in elections, so who’s the bigot now?”) You can say “sexist” or “hostile to women” or “anti-feminist” if you prefer.
Cerebus #186 is toxic. Mothers & Daughters taken as a whole is an astonishing work of literature. Toxicity can be a component of an astonishing work of literature: in the same way that noise and dissonance can be a component of a piece of music and ugliness can be a component of a painting.
I am not saying that Mothers & Daughters is a great graphic novel if you ignore the sexism, any more than I am saying that Lady Chatterley’s Lover is a great novel if you ignore the sex or that Tony Harrison’s V is a great poem if you ignore the swearing. Sex, swearing and misogyny are part of what make up the work of art.

It used to be said, quite seriously, that Shakespeare was the greatest English poet because he was the greatest English man— his words were the outpourings of his great soul. The dirty bits and the silly bits were forced on him by commercial concerns and should be ignored. The plays were too vulgar to perform: it was better to just read the great speeches. If you really had to put these great speeches on the stage, then the person playing the clown should speak the dirty jokes very quietly and not try to get laughs out of them.
I recall a columnist in the Daily Mail, many years ago, saying that you could tell that civilisation was about to end and that political correctness had gone mad because the poetry of Sylvia Plath was on the A Level literature syllabus. But Sylvia Plath’s poetry is about madness and decadence and depression and suicide: why on earth would you study that when there is so much poetry about skylarks and Grecian urns and the west wind available? Shouldn’t English literature mean putting the Best and the Greatest before students—Great Men like Shakespeare and Wordsworth; not crazy mixed up kids like Sylvia Plath?
The Right say that Steinbeck cannot be great literature because he has liberal (and therefore Wrong) beliefs about the Depression. The Left have at times come very close to saying that Rudyard Kipling cannot be great literature because he has conservative (and therefore Wrong) views about colonialism.
William Blake. I love William Blake. I love The Little Black Boy. The last lines honestly make me weep. But the racism of the opening stanza honestly bring me out in a cold sweat. (1)

Five issues later, Viktor Davis tells The Reader his opinions about men and women.
And what he says is pretty rancid. The male principle represents light and creativity; the female principle is a void which sucks creativity from males. The male principle represents intellect (“I think”); the female principle represents emotion (“I feel”). Life is female and death is male; but because the void and the emotional now rules the world, life is hopelessly and unsustainably outperforming death.
Here is a sample.
In contemplating the full weight of popular culture, television, movies, magazines and newspapers, I see the completely unopposed advocacy of Merged Permanence and I think that a definite brutality is called for. The Male Light is jeopardized on all fronts, in my view. The Devouring Rapacious Female Void is not a thing to be taken lightly, to be explained away, to be rationalised into neutrality. I’m not here to make you feel good. I am here to make you think. And to make you think, I have to make you see.
Emotion, whatever the Female Void would have you believe, is not a more Exalted State than is Thought. In point of fact, I think Emotion is animalistic, serpent-brain stuff. Animals do not Think, but I am reasonably certain that they have Emotions. “Eating this makes me Happy.” “When my fur is all wet and I am cold, it makes me Sad.” “Ooo! Puppies!” “It makes me Excited to Chase the Ball!” Reason, as any husband can tell you, doesn’t stand a chance in an argument with Emotion. There are no rules to Emotional Argument. You simply wander around in rhetorical circles until you feel Happy again, and then the argument is over. This was the fundamental reason, I believe, that women were (rightly) denied the vote for so long. In order to move a civilisation forward, an overview is required. You have to be able to step back and examine the structure of a problem. This is what Thinking, Reasoning, is. Every political campaign waged in the G-7 countries has as its centrepiece Job Creation. Polls give the politicians a list of voter concerns. Job Creation is at the top of the list. Ergo, the politicians promise Jobs. Because the Female Void dominates proceedings (simply because the Female Void dominates everything), a candidate is elected based on how he or she makes the electorate Feel. We Feel we can Trust this candidate. No effort is made to step back and ask, “Isn’t the whole point of technology to eliminate work?” Reason would tell you that you can either eliminate (or limit) technology or you can eliminate (or limit) jobs. It is not possible to have it both ways. The Female Void Emotional response is that we have to have it both ways. And so we do. And so the problem gets worse instead of better.
Dave Sim is NOT a misogynist. The UK Comic Laureate says so.
The interleaving of Viktor Reid and Viktor Davis with the ongoing Cerebus narrative has a complex architectonic effect which Sim clearly plans and intends. Anyone who tells you that Sim just said “sod it can’t be bothered to write a comic book this month I’ll just editorialise instead” has not read or engaged with the text. But since the text goes out of its way to make itself hard to read and engage with, this is entirely understandable. You could say very much the same thing about James Joyce or Thomas Pynchon. (4)
Yes, there is a problem with population; no, I don’t think we can usefully say that this is because Death is Male and Birth is Female. Yes, there is a problem with emotionalism in the media and politics; no I don’t think that’s because women have too much power and men have been feminized. Yes, I think that there are people like Dave Sim and Viktor Reid and myself who are too selfish to ever be happily married. No, I don’t think that females are Voids who suck the Light out of men.
But this all comes in the context of a fantastically interesting two hundred and fifty page structural experiment and virtuoso textual mind-fuck. While a male and a female aardvark, embodying the male and the female divinity, are beating hell out of each other. Viktor Davis is pouring out page after page of theories about masculinity and femininity. I am prepared to look at that as a piece of artifice. A piece of construction. A component of a novel. Reading a book is an emotional roller coaster in which the writer does something to us; and my God did Dave Sim do something to me over those pages.
“So: you are saying that the cleverness of the construction and the total work of art justifies the toxicity of one of the text sections?”
No. I am saying that the toxicity of one of the text sections does not overwrite the cleverness of the construction and the value of the total work of art.
And the one might just be a component of the other.
In addition, as he’s going to be teaching politics, I’ve told him he’s welcome to teach any of the great socialist thinkers, provided he makes it clear that they were wrong.
Monty Python
If you enjoyed this essay, please buy me a cup of coffee.

1: My mother bore me in the southern wilds; and I am black, but oh my soul is white. White as an angel is the English child; but I am black, as if bereaved of light.

2: Steve Gerber did everything Dave Sim did, earlier but not so well. Discuss.

3: The Dead Man was Judge Dredd all the time.

4: I have never read Thomas Pynchon.

Patreon Supportes can download all 7 parts of this essay, with exciting extra features and jokes, in a pretty PDF format. Just pledge do send me $1 for each essay I write.
If you don't want to commit to being a Patreon, send me $14/£10.50 and I'll send you the PDF.
Or you could even buy a physical copy from £15.50. (£10.50 for me and £4.00 for Lulu)
Email ThisBlogThis!Share to TwitterShare to FacebookShare to Pinterest
Labels: 2021