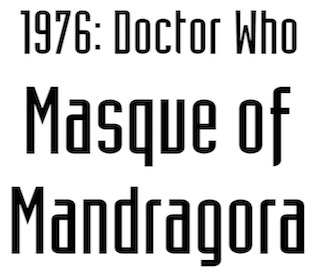 Last year we ran through all the cliches that could possibly arise from alien invaders in Scotland: bagpipes, oil-rigs, haggis, lake-monsters. This time, we go through everything that could possibly happen in olden days Italy. Torture, sword fights, beheadings, sorcery, catacombs, astrology, science...
Why is Marco being tortured and what does it matter to the plot? I am not entirely sure. But I am sure that Marco is noble and blonde and brave and that Federico is filthy and disgusting and sadistic and above all foreign and you totally need a scene in a dungeon in this kind of adventure.

Hieronymus hypnotises Sarah and sends her to murder the Doctor. The Doctor realizes that Sarah has been hypnotized because she starts to question the basic premises of the programme. How, she wonders, can she understand what Giuliano is saying, given that she doesn’t speak Italian? “Because them’s the rules of the show” explains the Doctor “If my companions couldn’t communicate with cave men and Daleks and Romans and Aztecs it would all become very boring very quickly.” (Well: what he actually says is “I’ll explain later” and “It’s a Time Lord gift, I share it with you”, which comes to much the same thing.) But he knows that the real Sarah would never have asked such a sensible question.
Very boringly indeed, the “Time Lord Gift” became an actual plot-point, as opposed to a plot device, in the rebooted series.

The Doctor wears his scarf at all times. He no longer bothers to tie it round his neck: it just hangs there, like a sash. (Sashes will shortly become very important.) Do you have any idea how hot he must have been in Italy? (The episode was actually filmed in Portmerion. Everything is filmed in Portmerion.)

Giuliano takes on Federico’s men. He parries four swords at once and pushes them away.
“You craven gutted curs” says Federico to his goons “He is but one man”. And then Doctor Tom appears, sword in hand, and says “You can’t count, Count.” (There is a nice little fanfare in the incidental music, just to underline the point.) It is the kind of thing that might have been said in any Wurwitanian Womance.
We are sometimes told that in Old Who, the Doctor was a man of science, not a man of action: that David Tennant, in particular, turned him into a British Indiana Jones. And yet, here he is, buckling every swash in Errol Flynn's Book. He holds a sword to a bad-guy’s throat and pushes him away. Several times he jumps in the air as a bad guy goes for his legs. He grins right through the fight, and at one point licks his lips with enjoyment. Spoilsport grown ups may notice that the Doctor’s hair gets longer in fight scenes (at any rate, when filmed from behind). The same thing happens when he jumps on a horse. But the director manages to disguise this pretty successfully: back shots of stunt men are inter-cut very swiftly with close ups of the Doctor’s face.

Don’t you think that, by the standards of 1970s children’s TV, there are a rather a lot of lavatorial references in this episode? Which is fine: kids like toilet jokes almost as much as they like executions. The Captain Of The Guard tells Federico that there are places in the Catacombs where the bat droppings are twice the height of a man: Federico calls the Captain of the Guard a shit-head. (Well, dung-head.) He also calls his nephew a sewer rat and says that Hieronymus can no more read the stars than he can read “my chamberpot”. If you discard one very prominent and unfortunately unremovable bit of signage in the Faceless Ones, I think this is the first suggestion that anyone in the Doctor Who universe ever needs to go.
Torture

We have had a beheading and a human sacrifice, so of course we have to have a nice bit of torture. It is the most conventional, archetypal torture scene you ever saw. Federico wants Marco to say that Giuliano is part of the Cult of Demnos. Which he isn’t, obviously. Marco whispers “Never!” Evil Duke says that the torturer can be over-zealous and that “not everyone survives his attentions”. Marco snarls “You devils!” Federico appeals to his intelligence and leans in close for his answer. Marco spits in his face. One half-expects him to say “No, no, not the comfy chair” while Federico blows up the planet Alderaan.

Episode 4
The Doctor works out what the audience has already guessed: the Mandragora Helix hijacked the TARDIS to bring it to this specific point in history because there was already an appropriately Helix worshiping body available for it to snatch.
The Doctor makes a temporary pact with Federico and gate-crashes the Demnos worshipers revival meeting in the catacombs.
Federico rips the mask off the leader of the cult and reveals...nothing underneath. Whereupon the cult leader unceremoniously disintegrates Federico. It recalls the iconic ending of Pyramids of Mars Episode 1. Federico is great fun as a pantomime villain, but he has to be eliminated before the big finish.
The final episode is Quintessentially Splendid. Once Federico is dead everyone agrees to accept that Giuliano is boss and not chop Sarah and Marcus’s heads off after all. Giuliano holds a big party—indeed, a Masque—to which Leonardo and all the other Turtles are invited. If the Helix kills everyone at the party, the Renaissance will not happen in Italy. (Or if it does, it will have no importance.) This will in turn prevent the human race establishing a galactic empire in the far future. There is a brief hand-wave about how if Mandragora conquers the earth it will kind of make astrology true because it will take away human free will.
The Doctor spends some time cobbling together a Plot Device: a suit of armour with wire in it which will enable him to drain the Mandragora Energy from Hieronymus when he tries to zap him. In New Who, he would presumably have discovered some Anti-Mandragora spray in his pocket; or made all the people hold hands and think beautiful lovely thoughts. I grant that defeating an ancient cosmic evil with some cleverly wired fifteenth century armour is not a lot more logical; but it is a good deal more narratively satisfying. It says “The Doctor beat Mandragora because he is clever and brave and ingenious” not “The Doctor beat Mandragora because he’s the Doctor”
There is a sense of gathering doom. The Doctor admits to Sarah that everything is going very badly: but he continues to joke about it. The masque itself looks sumptuous, but it is Tom and Liz who carry the day. Sarah does not get quite as far as breaking the fourth wall: but she is so aware of the Doctor’s quirks and mannerisms that she effectively lampshades the excesses of Tom Baker’s performance. She tells the Doctor off for being flippant. She tells him off for being obscure. The Doctor admits that if he has guessed wrongly, he will be killed, but asks “When have my guesses ever been wrong?” leaving Sarah to say “Lots of times...” to the audience. You couldn’t imagine Sarah undercutting the Third Doctor in quite that way: come to that you couldn’t imagine Elisabeth Sladen taking the wind out Jon Pertwee’s grand old sails. Sarah wasn’t the first companion to answer the Doctor back. Jamie and to an extent Steven could see right through him. That kind of thing can easily degenerate into series undermining camp. But Sarah challenges the Doctor, not because she wants to undermine him, but because she cares about him. She is the perfect dramatic foil. Oh, where will we find another?
The Doctor confronts Hieronymus and is suitably flippant and sarcastic to him. He claims that it is part of “a Time Lord’s job” to insist on justice for all species, which is a far cry from “I renounced the society of Time Lords” and indeed from “We pride ourselves that we seldom interfere with the affairs of others”.
The plan works. Everyone thinks it has failed, and a lot of minor guests at the Masque gets zapped; but in a way I can’t quite follow the Doctor has swapped places with Hieronymus. So when the Mandragora energy is ready to flood the earth (which has to be during an eclipse, obviously) it floods the Doctor instead and is reflected back on itself. Because it isn’t bright enough to know that the man in the mask isn’t Hieronymus, because the Doctor is doing a jolly good impersonation of his voice.
The Doctor grandstands. Having saved the universe, with a silly grin on his face, he demands a round of applause and a salami sandwich. He does, in fact, leave with large sausage under his arm, a farewell gift from Giuliano. (Salami making, like the cult of Demnos, can be traced back to ancient Rome. I looked it up.)
Not a jelly baby. A salami sandwich. This is not an ad lib; this is not a serious line said in a silly voice (or even a silly line said in a serious voice.) It’s just a very silly line which must have been in the script.
The Shakespearean Doctor has gone. The Arrogant Doctor is going. Soon, the Silly Doctor will have taken over.
If you enjoyed this essay, please consider supporting me on Patreon.
My enormous book on the Eccleston, Tennant and Smith years is still available.

Email ThisBlogThis!Share to TwitterShare to FacebookShare to Pinterest
Labels: 2021

We just finished this (well, actually, we're on Face of Evil now) in my from the beginning watch of Doctor Who with my daughter. (Obviously we skipped the non-existing stories though we did watch all of the orphaned episodes and I filled her in on stuff that happened in the missing episodes.)

I am guessing Tom Baker will supplant Jon Pertwee as my daughter's favorite Doctor by the end. (Right now, her opinion is that they are both awesome.)