If you enjoy this essay, please consider purchasing a copy of Where Dawkins Went Wrong and Other Theological Blockbusters from this address - a collection of  some of the best and most-linked-to essays from this blog and its predecessor. It contains my five part assault critique of 'The God Delusion', along with essays on gay bishops, the 'gospel' of Judas, the 'legend' of the three wise men.


Most of what follows is true.

It was taught by Mr. Muir with the help of a big reel-to-reel tape recorder. Tape-recorders generally meant that the lesson was going to be interesting, but you needn't pay much attention to it - Science or Music or Drama. On Fridays there was a tape-recorded religious service with a special hymn book and Johnny Morris doing funny voices.

Mr. Muir was headmaster. I think he often chose to teach the interesting lessons like Science and Painting and Football and left ordinary teachers like Miss Walker to teach the dull ones like Sums and Verbs and Needlework. But I wonder if he had to teach this particular science lesson because Miss Walker had refused point-blank to do so?

We never had a single word of sex education: not even the baby animals coming out of mummy animals' tummies kind. Once, when we were doing a Project which involved picking stories out of last week's newspapers and talking about them, Spencer had asked Miss Walker to define the word "streaker". She said that it was "a man who did what you mustn't."

This particular tape involved a long, exciting, dramatized account of a man with a beard who had gone on a long voyage on a ship to an island and discovered some tortoises. I don't believe the E-word was mentioned.

In Masterplan Q, Doctor Who visited a planet that was in a very primitive state and therefore of great interest to evolutionists like himself. This was on the back of a Nestles Chocolate wrapper, and therefore possibly not cannon. As well as listening to programmes taped off what Miss Walker called the wireless, we sometimes traipsed out into the corridor and watched a Schools Programme live on TV. The idea of taping TV programmes hadn't been invented. Quite a lot of these programmes seemed to be about Fossils. I don't know how many times and in how many different ways it was explained that dead animals could sometimes leave their shapes in rocks. In principle, one could do the same thing with blotting paper. The TV was opposite Mr. Muir's office, so sometimes while you were watching the TV programme about fossils and (and sometimes coral) someone else would be waiting outside Mr Muir's office to be smacked, which could be a distraction. I wonder if we were supposed to have moved on to Fossils of monkeys and thus to the big E? But so far as I remember, we never got beyond starfish. I had (speaking of monkeys) a full set of PG Tips Tea cards, so I must have always known about dinosaurs, but I am not quite sure where I thought they fitted in to anything.

I got the point that the man with the beard had found skeletons of monkeys on the tortoise-island and realised that these monkeys must be the same monkeys that human beans were descended from. At the end of the radio programme, I raised my hand, possibly waved it around somewhat, and spoke words to the effect: "Please, Sir: Does this mean that God didn't make the world after all?"

Mr. Muir's reply was oracular, if not actually prophetic.

I am ashamed to say that I went against the spirit of his instructions and actually did ask Miss Walker.

"Please Miss," I said, "We've been doing the Voyage of the Beagle with Mr Muir, and he said to ask you whether God made the world."

"Ah," said Miss Walker in an off-hand kind of way, "All that means is that men have found old bones of animals which they think look a bit like people's bones. I shouldn't worry about it if I were you."

At secondary school, we got 35 minutes of R.E taught by biology teachers, geography teachers and P.E teachers. One teacher talked about Rudyard Kipling and Inuit creation stories. A different one pointed out that the book of Genesis had got the order in which things were created exactly right, even if the time frame was out by a factor of a few hundred billion, so that proved it. A girl with plaits called Sonja pointed out that if people had evolved from monkeys there wouldn't be any monkeys, so that proved it. The geography teacher explained that all the wars in history had been caused by God, but she had a hearing-aid so no-one paid any attention to her. Girls got a film of how a baby is made, and boys got a chat about how playing with yourself is perfectly normal and you should avoid homosexuals even though it isn't really their fault. Everything I know about evolution I learned from David Attenborough, although to be honest I was more interested in the BBC Television Shakespeare. After I left school, Mrs. Thatcher invented the National Curriculum and abolished homosexuals, smacking and the GLC, so it's all probably very different nowadays.

But the question "Does the Voyage of the Beagle mean that God didn't create the world after all?" is still a controversial one. If you get the answer wrong, you won't necessarily be sent to stand outside Mr. Muir's door, but you may be kicked out of the Royal Society.
131 comments:
Email ThisBlogThis!Share to TwitterShare to FacebookShare to Pinterest
Labels: God, RELIGION 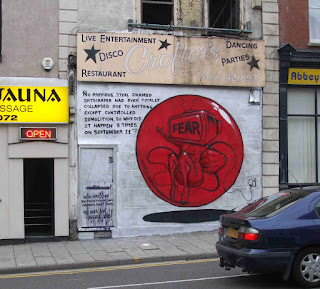