"The Physical Impossibility of Debate In the Mind of Someone On the Internet" is now available in no-frills Epub and Mobi (kindle compatible, I do believe) versions. PDF is still available. Sales are already approaching double figures. 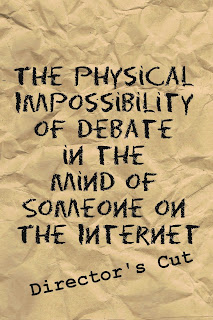 I wrote a thing about the thing that I wrote. And then I got someone who admires my writing very much to write some annotations. And then I stuck in some other bits and pieces I had lying around. and I put it together as a PDF. (I will take the arguments about formats for granted, and have a go at making an e-book tomorrow night.) If you are interested, please chuck a few coins in the tip jar and I'll e-mail it to you. Obviously, I don't do it for the money, I do it for the sheer love of people not knowing what the hell I am going on about, but about £1.20 per customer would be nice. It's about 20 page A5, including the original essay; comes in around 8,000 words, I guess. Possibly it will go some way to clearing up the confusion that the original piece generated.
Members of my direct family and people I've insulted in it will probably get one for free.
12 comments:
Email ThisBlogThis!Share to TwitterShare to FacebookShare to Pinterest
Labels: politics, POLITICS.

Nothing to say, really, is there?

No comments:
Email ThisBlogThis!Share to TwitterShare to FacebookShare to Pinterest
Labels: FOLK MUSIC

If you feel that this essay is worthwhile, please consider purchasing the "extended edition" (PDF, epub, mobi) in return for a small donation.

Right so bitwixe a titlelees tiraunt
And an outlawe, or a theef erraunt,
The same I seye, ther is no difference.
To Alisaundre was toold this sentence:
That for the tiraunt is of gretter myght,
By force of meynee for to sleen dounright,
And brennen hous and hoom, and make al playn,
Lo, therfore is he cleped a capitayn;
And for the outlawe hath but smal meynee,
And may nat doon so greet an harm as he,
Ne brynge a contree to so greet mescheef,
Men clepen hym an outlawe or a theef.
Geoffery Chaucer
Woman is the nigger of the world.
John Lennon

Let us suppose, hypothetically, a country in which there was, and had always been, a link between complexion and seating on public transport.

“Terrorist” is what the big army calls the little army. It’s only “class war” when the poor fight back.
And this is true of every argument and every disagreement. Every quarrel is, in the end, a quarrel between a person with power, and a person without power. So you only ever have two alternatives: intervene on the side of the guy being beaten up; or intervening on the side of the guy doing the beating. If you do nothing, then you allowing big guy to carry on whacking the small guy, which amount to supporting the bully. If you say "But what if the fight really about? Maybe the little guy antagonized the big guy in some way?" then you are still doing nothing and allowing the victimisation to carry on.

Of course, you may dress it up in fancy words. "I feel sorry for you" I may say "I genuinely do. I have nothing against dark coloured people. Some of my best friends have dark coloured skin. But philosophically, you will concede that it is part of the Cosmic Essence of buses that the dark coloured people must sit at the back  of them and light coloured people must sit at the front? You wouldn’t want to upset the Balance of the Force, would you? Or if you do not concede that, you must at least concede that that is part of my sincere and devout beliefs, and the since and devout beliefs of many other Jedi? So in order to preserve the Cosmic Balance, or out of respect for other people's faith, I must reluctantly sit in the comfortable seat. But do please understand that it isn’t about you. It’s about the bus.”
If I said this, I think that you might well take the view that I hadn't really said anything at all. All my talk about the Force and Cosmic Essences amount to "Well, I would give up my seat, but I don't feel like it." La la la I'm not listening!


Of course, most people are better at concealing their privilege under a poor mask of logic; but that's all it ever is -- a mask. Suppose I say: “Why does the law ban me from killing foxes for sport, but permit me to keep chickens in horribly inhumane conditions?” Aren't I just invoking concepts like "humane" and "even-handedness" — which are in the long run just as made-up an imaginary as the Cosmic Essence of Busses — to assert the hereditary right of rich people (like me) to own the countryside and do whatever they like it in?

Or if I say "Is there any statistical evidence that capital punishment reduces the number of murders in society?", aren't I just invoking mystical concepts like "statistics" and "evidence" to occlude my belief that I'm a rich white guy, want rich white guys to stay in charge, and think that culling a few hundred poor black guys every year to show the who's boss is a small price to pay for maintaining the status quo? My use of terms like "murder" and "capital punishment" show pretty clearly which side I'm on. When a weak person kills a strong person, we call it "murder"; when a strong person kills a weak person, we call it "capital punishment". (C.f The school teacher hitting a little boys backside with a big stick, while chanting "Never...hit...anyone...smaller...than...you.")
It isn't that my arguments are "bad". It's the whole idea of "argument" that's the problem. "Arguments", "logic", "evidence", "proof", "neutrality" are things you learned in school, and schools were set up by rich white guys to teach ideas thought up by rich white guys in order to keep rich white guys in charge.
How did the light skinned people get to sit at the front of the bus in the first place? Not by winning an argument, that's for sure.
Everything's really all about power. (Unless everything's really all about sex, but that's an argument for another day.) You might think that you are talking about theology or music or sanitation but if you look under the bonnet, it's always really about who gets to sit at the front of the bus. The question is never "who is right?: it's always "which side are you on?"
All of which leaves me rather stuck.
So far as I can see, everything I've said above is true. But when I'm asked a question, my inclination is always to work out the answer from first principles. At any rate, to use some kind of argumentation and try to work out what the other fella is trying to say, and if he's wrong why he's wrong and if he might have a good point. Which keeps putting me on the wrong side of the question.
I have just deleted three separate paragraphs giving examples of questions I may be on the wrong side of. I know how toxic discussions about questions that people are on the wrong side of can become, and how quickly.
I have also deleted a paragraph about why I think they become toxic. It has been explained to me that when I try to do that kind of thing, I come out, to use the technical jargon, "sounding like a cunt". (I suppose this is why it is called "vulgar Marxism".)

Despite early assurances, the internet does not contain a 3D virtual reality in which I can be taught Kung Fu by Lawrence Fishburne and drown Tom Baker. All the internet actually contains is words. Lots and lots of words. Oceans of words. Millions of writers telling us what they think. Good writers, bad writers, indifferent writers; informed writers; ignorant writers; boringly right, engagingly wrong. Writers telling you what they think about what other people wrote about stuff they read on the internet. Derrida was right. There isn't any stuff. There's only people talking about stuff. I've never experienced a murder, or an election, or a football match, or (god forbid) an instalment of I'm a Celebrity Get Me Out of Here. I just kind of intersect with the ripples these things put out in cyberspace. Which isn't really a space, and isn't really very cyber. It's more like a lot of very bored people making wisecracks in their coffee break.
But all this argument is taking place in a space in which we have already agreed that argument is not even possible. "Right" and "Wrong" aren't qualities that any argument has: they are just descriptions of which side you are on in a big fight that has been going on throughout history, and will carry on until, any day now, history comes to an end.
And you knew that already.

So why are you even reading this?

I beseech you in the bowels of Christ: think it possible that you might be mistaken.
Oliver Cromwell


The infidel might have a good point, you know.
Les Barker


If you thought that this piece was worthwhile, please consider purchasing the "extended edition" in return for a small donation.