The Hebrew name for the first woman is usually transliterated as Chavah or Havah. I don't think that Greek had the hard "h/ch" sound, so Greek speaking Jews called her Eva. Interestingly, the first time she is named in Genesis 4, the Septuagint (the Greek translation of the Bible which Jesus and St Paul would have known) calls he Zoe. Zoe is the literal Greek word for Life. (You may remember that our friend C.S. Lewis draws a theological distinction between zoe and bios.) But afterwards the Greek Jewish Bible refers to her as Eva.
It is not too hard to see how a name could go from Chavah to Havah to Eva to Eve: much the same thing happens to Ionnes / Johannes / John. Our English Bibles are not always very consistent about nomenclature: Joshua, Hosea and Jesus are all used to represent Yehoshua.
Adam's wife is consistently referred to as Eve in English. In 1381, English revolutionary John Ball (as in "Sing, John Ball") famously asked
when Adam delved and Eve span
who was then the gentleman
The York Mystery play, first performed in the 1370s, has God say
Adam and Eve, this is the place
That I have graunte you of my grace
To have your wonnyng in
Erbes, spyce, frute on tree.
Wycliffe's translation, a century before King James, used the same name:
Forsooth Adam knew Eve his wife, which conceived, and childed Cain
In Dave Sim's Torah commentary in Latter Days, Cerebus quotes Genesis:

"And the man called his wiue's name Hawwa, because she was the mother of all liuing"... Hawwa, by the looks of it, is just a variation on Hava, to be. As in "let there be light""

Cerebus/Dave thinks this is a trick on Yoowhoo's part, since Adam has now falsely called Eve the mother of all living things, including God: the subordinate Demiurge is presenting a series of allegories that purport to show that she is the primary deity.

There is some discussion about the etymology of the name: Konisberg (the Woody Allen figure) tells Cerebus that the goyim changed Hawwa's name to Eve, which Cerebus thinks may be a pun on Evening.

"(Dave) must be aware of different translations because he pedantically calls Eve “Hawwa” even though he is working from the English text."

In Dave's commentary on my commentary on his commentary (and man, that's a weird thing to be typing) Dave calls me out for misspelling Hawwa: which I can't see that I have done. (I'm just quoting his text.) But on the substantive point, I have indeed unfairly accused him of pedantry (or even sloppiness). He does in fact make it quite clear in the text that using Hawwa instead of Eve is a conscious decision, for which he gives his reasons.
Earlier, Cerebus comments on the creation story: "The Yoohwhoo God said It is not good that the man should be alone: I will make him a help meete as before him" and asks "What the heck is a help meet, anyway."
I suggested that Dave was wilfully misreading this passage: that he pretended not to know what "help meet" meant because the idea that Eve was an appropriate or complimentary companion for Adam didn't fit in with his anti-feminist agenda. He says that it was simply a mistake: the text he was working from said "a help meet for him"; rather than "a help, meet for him". He accepts that my reading is better.
I should not have attributed a wilful misreading to what was in fact a simple scholarly mistake.
Indeed, I feel bound to say that Dave Sim has been very much more gracious to me than I have been to him.
Read Cerebus
Read me talking about Cerebus
Listen to Dave Sim talking about me talking about Cerebus.

Become a Patron!
Read My Blog
No comments:
Email ThisBlogThis!Share to TwitterShare to FacebookShare to Pinterest
Labels: 2021

When Did You Stop Reading Cerebus?

"It's really quite good" 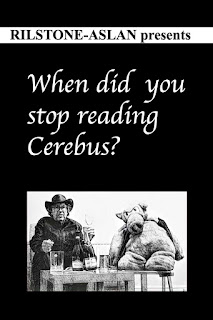 3 comments:
Email ThisBlogThis!Share to TwitterShare to FacebookShare to Pinterest

Which Ten Albums Most Influenced Your Musical Taste -- The Podcast

Andrew Rilstone And The Terrible, Horrible, No Good, Bad Footnote

Why  Andrew Is Never Going To Write About Politics Ever Again

Available to Patreon backers as a PDF/Ebook.

essays will appear on this blog in Dew Coarse.