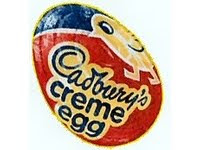 Email ThisBlogThis!Share to TwitterShare to FacebookShare to Pinterest
Labels: God

If mere ritual feasts are "soon withering" then why do they persist while the religions come and go?

The religions may come and go, but the desire for spirituality remains. The ritual feasts are an acknowledgment of that desire, however unconsciously so.

But doesn't the fact that many more people celebrate Easter (and Christmas, and St. Valentine's Day, and so on) as a secular festival than a religious one suggest that Lewis has things exactly the wrong way round, and that the chocolate eggs regularly persist when people stop thinking about Jesus? Even if you argue (as I don't) that the festival is a response to a spritual need and not just a desire to celebrate then it says something about relative priorities.

Well... As I read it, Lewis thinks that without the sacred element the boy will lose interest in the eggs or simply eat them all the year round. In other words, that the ritual feast, being worldly, only endures because it connects us with the eternal sacred. But in fact we see that even atheists celebrate ritual feasts, and that rituals regularly persist long after the things they symbolised are forgotten. So it seems to me that it's the ritual feasts that persist and the sacred meanings people attach to them that wither away. You might say that's because of original sin; I might say it's because people have similar social needs... but either way, I think Lewis is wrong.

Your argument might work for sweets that are available year-round, but Cadbury Creme Eggs are not. :)

I do know non-religious people who look forward to Easter season because they will, then, be able to get the only-available-around-Easter Cadbury Creme Eggs. They're not getting anything spiritual out of it, though, unless they've all been holding back on me about their feelings on the Eggs.

I know that by that Easter when I was in my teens where I participated in the most memorable (for me) Great Vigil of Easter, I had separated the sweet taste from the Resurrection. (It took me longer to separate donuts from Ash Wednesday, truth be told.)

Now, if we want to take Lewis's position on spirituality vs. mere ritual feast outside the realm of Christianity, I can tell you what I've heard from a lot of people about Burning Man, and the Temple Burn the night after the Big Burn, and The Effigy Of The Event for smaller Regional Burns, and how this compares to just doing things with fire on non-Burn days. You can burn wood for heat, you can burn propane for heat, you can burn wood and other non-hazardous materials for disposal purposes, but it does not have the same emotional impact on a hard-core Burner that an actual Burn does. And while a non-burning destruction of an effigy does not have the same impact as a wonderful huge fire, the important thing is that a group of people have come together to ritually destroy something, and some of them derive spiritual enjoyment from it.

(I can discuss more if Andrew will allow it, but if he'd like to leave the whole Burning Man crowd out of his blog, I will quite willingly not bring the topic up again. I just need his preference to be communicated to me clearly.)

I absolutely agree that one of the things that rituals can do is let people feel a connection with the sacred - whatever the sacred is - but I read Lewis as saying that it's the sacrament that preserves the ritual, which contradicts what I observe of the way people use rituals. And I (mildly) object to that, because I think Lewis is trying to persuade us that it's the thought of Jesus Risen that makes us want to give each other chocolate eggs.

Not quite sure that I know what a burning man is, but you are quite welcome to post about it in this forum if you wish. Thanks for interesting comments.

Thanks for the summary, Andrew - and thanks for taking the time to try and explain this.

But now I'm feeling dense because I don't see how this addresses my question. Easter eggs are not, in fact, "just sweets" to people who don't believe in Easter and a birthday cake is not "just a cake" even though there's no sacred aspect to a birthday party. So what is it that soon withers when the festal is seperated from the sacred?

I think Julia might say that it's the desire for the sacred that keeps the ritual alive; so no ritual is ever fully seperated from its sacred roots. I'm skeptical about that but not unsympathetic - I think it probably depends on where you draw the line between a ritual, a ceremony, and a superstition.

(As a tangent, it sounds like the Jewish sacrificial tradition was very different from the Graeco-Roman one. I'll have to look it up.)

Andrew Rilstone said...
This comment has been removed by the author.
Wednesday, 07 April, 2010

Okay - I can make sense of that, particularly with the context. Without it, the best alternate reading I could come up with was that people who put chocolate eggs before the resurrection end up losing the resurrection in favour of the eggs; which seemed a bit of a tautology.

(And I wasn't actually obsessed with the eggs - just missing the point of them.)

I did a bit of reading on the Jewish sacrificial tradition, BTW, and it does seem to have been interestingly different from the Graeco-Roman. More like inviting God to share a ritual meal than giving Him a present. But you may have known that already, what with it being all biblical and stuff?