For them that must obey authority
That they do not respect in any degree
Who despise their jobs, their destinies
Speak jealously of them that are free
Cultivate their flowers to be
Nothing more than something
They invest in.... 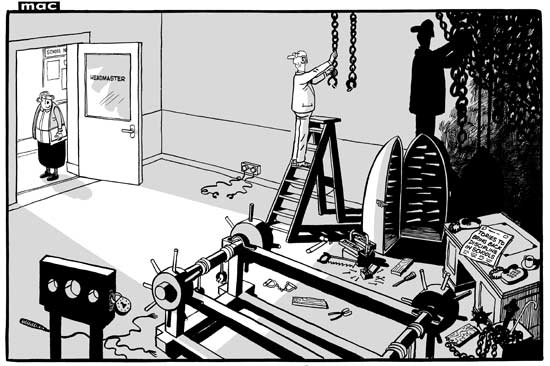 "or the fantasy (which Dave believe in) that teachers are not allowed to put sticking plaster on a grazed knee without filling out complex risk assessment paperwork."

Actually, this one is more or less true. For example, at our village school, where my two younger sons attend and the eldest did until last year, if a child is on prescription medicine, one of the parents has to physically come in to the school and give it to the child at the appointed hour: the teachers and other staff are expressly prohibited from doing this.

I quite like the idea that the Nasty Press is in favour of some sort of Class War...

I found this on the health and safety website:

So either there are specific rules about medicine which is different from the rules about plaster (which there might be) or else your school is going beyond what H & S rules actually require (which is also possible.)

Sometimes your writing is just brilliant.

Or better: Sometimes your writing is yes, just brilliant.


Thank you very much.

So either there are specific rules about medicine which is different from the rules about plaster (which there might be) or else your school is going beyond what H & S rules actually require (which is also possible.)

My guess is the former. I know the school pretty well, and it's not one to impose additional restrictions.

And this, I suspect, is what Dave really means by "discipline..." He means the idea that in the Olden Days, we did what Teacher or Headmaster said up to and including letting them hurt us -- just because they were Teachers and Headmasters. Arbitrary authority. Knowing your place. You can see why someone who aspires to run the country would like the idea.

But what interests me is how come it plays. Why is it such a bone to so many people? Similarly, why is immigration such a bone, even for people who live nowhere near high-immigration or cosmopolitan areas?

This isn't a rhetorical question! I'd really love to hear anyone's stab at answering it!

Gavin - I have my own answers, but this is quite a good place to start:

@Mike & Andrew
The medicine / plaster thing isn't restricted to schools - I renewed my first aid certification last year and the same rules apply to me; I can apply bandages and plasters and clean wounds, but I am not allowed to administer medication (not even paracetamol) to anyone. Until fairly recently I was allowed to use Epipens in the event of an anaphalactic attack, but not any more, mostly due to too many injuries caused to the first aiders holding them the wrong way up (I kid you not) and shooting themselves in the thumb with adrenaline.

Schools are just bound by the same rules as every other workplace in the country.

Oh, also, on the subject of immigration, Andrew, I have another reason to like it as well the whole "meeting different people is nice and also good for you" one (although I do like that too); from a purely selfish and hard-nosed capitalist perspective, immigration is better because you get a fully grown and, at least partly, trained adult ready to make a contribution to your society. Children, although usually cuter, require more money, resources and effort and can take twenty years or more to start putting back into the economy. Stealing workers from Poland and Lithuania is good for us and bad for them. They should be more upset about it than us.

Migration seems intrinsically bound up with the globalization that everyone in power claims to be so keen on. It's like with anti-immigration politics we're seeing the last gasp of nationalism before its demise. I remember in the 70s all those "Buy British" adverts trying to help with balance of payments after the collapse of the Bretton-Woods agreement. That campaign wasn't so much an attempt to prevent imports as an emotional reaction to the fact that we we'd given up on manufacturing. Now we have union flags on our milk to symbolise the fact that most of our groceries are imported. And we have anti-immigration politics because soon no-one is going to care where the people around them were born.

Thanks to Sam for the link. Only had time to give it a cursory look so far, and it reminded me of Fromm's Fear Of Freedom. Am I close?

I'd not heard of Fromm before now - Wikipedia makes him sound like more of a theorist than Altmeyer, but I can't really comment. Is he any good?

Well I read Fear Of Freedom for my degree, which was approximately a quarter-century ago, and insofar as I remember that's the only one I've ever read right through. So when I say "worth reading" take my judgement with the proverbial pinch!

He's a Marxist Humanist, which seems to be rather out of fashion now. Not materialist enough for the Marxists, while everyone else insists Marxism is all over! A lot of people on the Marxist side lump him in with explanations for fascism which are psychological not historical. Which they (correctly) point out should mean we get fascism all the time or never.

But that's only one section of the book! I think he's more talking about a tendency to a psychological type, of which fascism is just a more virulent example. (Cue argument after an earlier post...)

Oh yes, happy kids, that's what we want. Happy kids and fewer teachers. I mean, ideally, no teachers. Not in charge, anyway. Then the kids can do what they like: play football, if that's what they want to do, read comic books, stick the severed heads of pigs on spikes. Whatever.

I was pointed to this web-log, by someone who was also not impressed by Cameron: http://winstonsmith33.blogspot.com/

(To be clear, the web-log is by someone who was not impressed by Cameron (though I don't think the person who pointed me to is was terribly impressed by him either)).