Noticing some fair-haired children in the slave market one morning, Pope Gregory, the memorable Pope, said (in Latin), 'What are those ?' and on being told that they were Angels, made the memorable joke — 'Non Angli, sed Angeli' ('not Angels, but Anglicans) and commanded one of his Saints called St Augustine to go and convert the rest.
1066 And All That

The following piece of silliness is circulating on the Twittersphere.

Astonishingly, some schools ask parents for information about their children when they start school. Astonishingly, some of these forms have a space marked “religion”. Non-religious parents presumably write "none" in the space and move on. But some parents apparently think that it's more helpful to write a long sarcastic letter and post it on the internet. 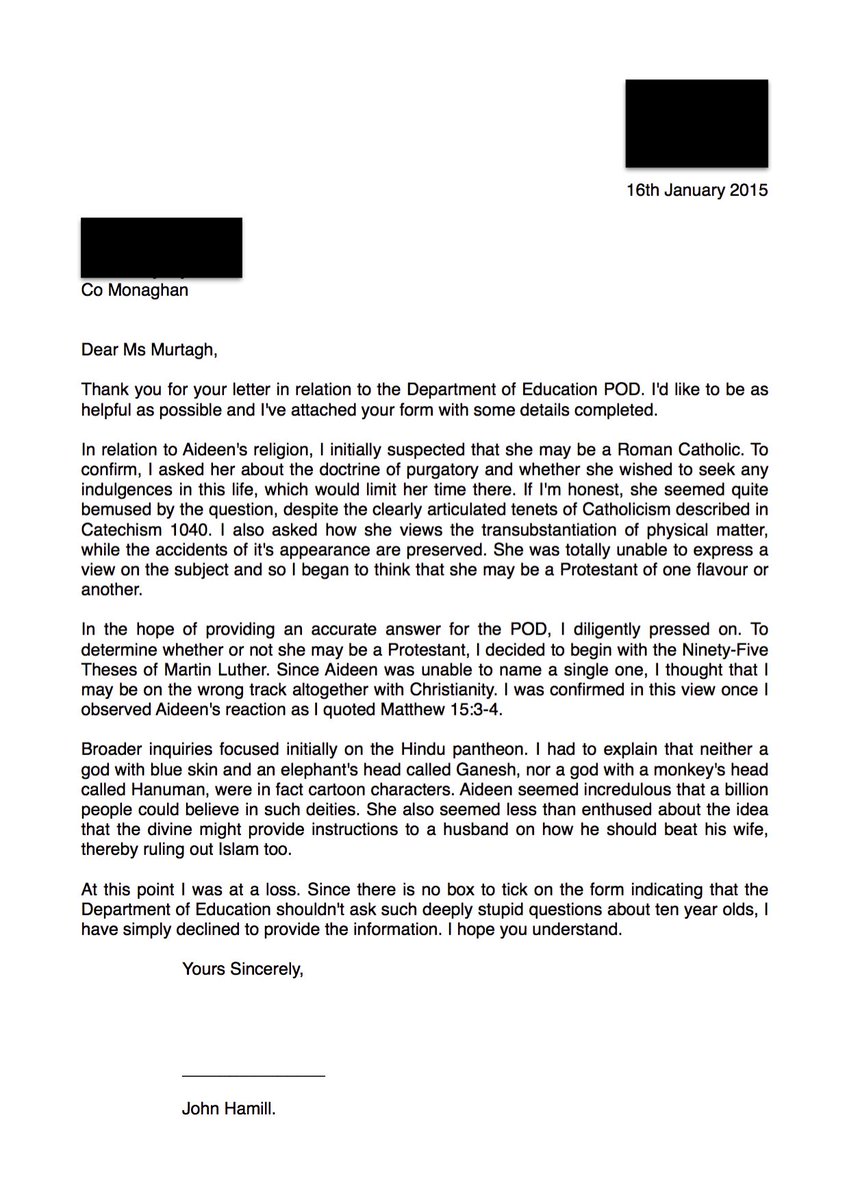 On the substantial point: I tend to agree that you should be careful of festooning children with their parent's beliefs. In the spring 1974 I remember my parents taking me on a march, with banners and a brass band and everything, to try to persuade the people of East Barnet to elect Harold Wilson as Prime Minister. (It didn’t work the first time, so we had a another go in the autumn.) In a way, that made me a Labour kid. On that basis, my friend, who marched behind the local MP, the Pythonesquely named Reginald Maudling, was probably a Conservative kid although neither of us could have answered detailed questions about the Common Market or Trade Union reform.

I still think that Thomas Helwys [*] had it right and Cranmer and Wesley had it wrong. Baptism ought to be a dramatic ceremony of rebirth, undertaken by someone who has positively decided that they want to be Christian, not a magic spell which turns a baby into an Anglican whether they like it or not. You can't blame the Book of Common Prayer if some people don’t take the ceremony seriously or understand what it means. But some fans of the Established Church encourage a theory that Christianity isn’t about belief or practice but about belonging — if you were baptised, or even just born in England, then you are Church of England whether you know it or not. A theory of belonging can to easily turn into a theory of exclusion. For every Rev Smallbone who thinks that it is his duty to serve everyone in his parish regardless of their faih there is a Daily Mail reading simian who thinks that "Christian" means "white person" and "Muslim" means "foreigner".

Islam teachers that everyone is a Muslim when they are born. But since “Muslim” means someone who is in submission to God, I think that only means that they don’t believe in Original Sin. A lot of American Christians speak as if they think “the Kingdom of God” and “America” are the same thing. Only sometimes does that turn into an actual theological theory.

The piece of sarcastic rubbish that some hardworkingteacher had to waste time replying to was not remotely interested in any point, substantive or otherwise. Someone saw the opportunity to participate in the Sacrament of the Sneer, and by Dawkins they went for it.

And so, accidentally, it gives us some interesting insights into how these people's minds work:


“…I asked how she views the transubstantiation of physical matter while the accidents of its appearance are preserved. She was totally unable to express an opinion so I began to think she may be a protestant…”


Got it. It is funny to ask if a ten year old is a Catholic because what identifies you as a Catholic is particular “views” on doctrinal questions expressed in technical language. I think you could very easily say to a ten-year-old “When we go to church, do you think that the bread and the wine becomes the actual body and blood of Jesus” and get a perfectly clear answer:

1: Yes: God changes it by a miracle

2: No: we do it to remember Jesus because he asked us to

3: Neither: only silly people in the olden days believed in Jesus

Of course, in each case, the answer would actually be "I believe whatever Daddy says." That applies to the so-called-atheist child just as much as the so-called-Catholic child. I know that I support Arsenal Football Club even though I have never watched a game of football in my life, and would need to double check if the football they play is the "kicking the ball through the goal" kind or the "carrying the ball over the line" kind.

“…To determine whether or not she may be protestant I decided to begin with the Ninety-Five theses of Martin Luther. Since Aideen was unable to name a single one, I thought that I might be on the wrong track altogether with Christianity…”

Got it. It is funny to ask if a ten year old is a Protestant because what makes you Protestant is the factual historical knowledge of the history of Lutheranism.

I am going to let you in on a little secret. I couldn’t name you one of Luther’s theses. I know that he disbelieved in the miracle of the Mass and didn’t think purgatory was real and was big on something called the Priesthood of All Believers. He believed in predestination, but not as much as Calvin. Again, I think you could perfectly well ask a ten year old “How do we find out what Jesus wants us to do?” and get a perfectly good answer:

1: By reading the Bible quietly by ourselves

2: By obeying what holy men like the Pope tell us

3: Don’t be silly, only silly people in the olden days believed in Jesus.

Again, the perfectly good answer would really be "I believe whatever Mummy believes". That's just the way things are.

"...I had to explain that neither a god with blue skin and an elephant head called Ganesh, nor a god with a monkey’s head called Hanuman, were in fact cartoon characters. Aideen seemed incredulous that a billion people could believe in such deities…”

And now we come to the point. White People’s religion is about dry, obscure knowledge that you couldn’t possibly expect a child to have an opinion on. Brown People’s religion is silly and childish and a ten year old can instantly see through it without a moment’s thought. This is consistent with the dogma promulgated in the atheist's holy book which says that it is worth spending a few pages taking down monotheism, but that you should simply "gesture towards" polytheism, say "who cares?" and then move on.

“...She also seemed less than enthused about the idea that the divine might provide instructions to a husband on how he should beat his wife, thereby ruling out Islam too…”

Again: one set of Brown People have a religion which is childish and silly; and the other set have one which is violent and primitive, and there is no more to be said. You can’t positively declare that you believe in the White Man's God unless you can understand complex dogmatic points in technical language. But you only need to hear one line from the Turk Bible to know that Brown Man's God is rubbish. Someone who abstains from food during Ramadan, observes the prayer times, attends mosque on Friday, chooses traditional modes of dress but admits that he has a problem with some of the more bloodthirsty passages in the Koran is not a Muslim. A ten year old says so.

It seems to be false to say that the Koran contains instructions on how a man should beat his wife; although it does seem to be true that it says that he is permitted to strike her under certain circumstances.

One meets incredibly annoying pedants who arbitrarily assign “true” meanings to words and act with mock outrage and fake incomprehension when you use the word in a different, (i.e normal) way.

“You said that your friend Steven was gay, but he didn’t seem especially joyful to me” they say

“You said that at the end of the day we would have to accept a small pay cut, but I can’t see why we couldn’t do it first thing in the morning and get it over with.”

"There was a small mistake in your article" they say innocently "You referred to Mr Hitler as an extreme right-wing dictator, where in fact everyone knows that the Nazis were leftists."

The new Atheist has decided to define “religion” as “a set of doctrinal opinions” or “the literal belief in particular set of scriptures”: and feign surprise that anyone — a school teacher, for example — could possibly use the word in a different sense.

Protestantism isn’t the 95 Theses. It really isn’t. It’s about what kind of service you attend; what kind of hymns you are familiar with; what festivals you observe; what kind of clothes you’ve been brought up to consider modest; what community you see yourself as part of; and  — very, very probably — what part of town you live in. It is kind and neighborly to find out if someone is a Catholic or a Protestant so you know what day of the year they get presents on and whether the fourth Thursday before first Sunday after the first full moon after the vernal equinox is a special day or not. It is kind and neighborly to find out if someone is a Hindu or a Muslim so you’ll understand why they are giving strangers sweeties or skipping lunch and whether there is any kind of meat they'll be freaked out by. (No, at ten years old they probably can’t give you a degree level essay on why Hindus abstain from beef and Muslims abstain from pork. But think how you'd feel on your first day at a new school if someone gave you a plateful of roast dog.)

“But I don’t indoctrinate my child into any faith. We do not celebrate Yon Kippur or Diwali or Eid. We only celebrate the universal human non-religious festivals like Christmas and Easter. We don’t have any rules about what food we eat, apart from civilized white people’s rules about cat and dog and horse. And we aren’t part of any community, although like all normal people we mainly mix with middle-class college educated atheists. None of our best friends are Muslims."

Great. That was exactly what the form was asking you. Does your family have any special festivals, any special holidays, any days where you eat special food, which we ought to know about? If the answer is “no” then “no religion” is the answer and it tells the school exactly what it needed to know.

If everyone reading this pledged $2.73, I could do this for a living.

If you have been affected by the issues raised in this article, please consider reading my book "Where Dawkins Went Wrong"