Luke: How long til we get to the secret rebel base?
Han: What, Yavin?
Luke: Thanks. Mine's a pint.
Very Old Joke


Close up of ninja.

We deliberately start with an image that has nothing to do with Star Wars: a teenage mutant ninja turtle. Well: a ninja, at any rate. (The Episode I trailer began with a pretty direct Kurasawa reference. Robots sneaking through long grass in the mist.)

Well, I saw a ninja. Possibly the image also calls to mind Princess Leia's disguise at the beginning of Return of the Jedi.

Ninja, climbing in the huge space of a space ship. Music in background is not Star Wars music.

About the only thing I liked about The Abomination were the opening scenes in which Kirk's dad was seen crawling around a spaceship that looked very like the TV Enterprise; but being filmed in the style of Aliens or Blade Runner. Familiar, iconic images from unfamiliar angles. If the rest of the film had been like that, I would not have hated it. It wasn't, and I did.

We can assume from this that she is someone very important indeed.

Woman, who we can tell is the ninja by her big pointy stick, walking across sand-dunes, accompanied by spherical droid, and sitting in a tent in green fatigues.

We know that the lady is Rey and the droid is BB/Beebee. (This is not quite as cute as FE/Effie, but it's getting there.) The planet is not, in fact, Tatooine, but Jakku. Is it possible that there are two desert planets in one universe?)

These images scream “Star Wars” at us, The first ones allude to Threepio and Artoo in the opening minutes of A New Hope. The brief scene in the shelter calls to mind Watto’s shop in Phantom Menace.

Rey is “no-one”, but she’s not above dangling on ropes in huge shipwrecks. The one thing we know about her is that she is a scavenger.

Conjecture: The amateur scavenger goes on board the wrecked ship and retrieves something the value of which she does not realize. "Rebels" and "Imperials" converge on her planet to try and get it back.

What is this macguffin?

1: Luke Skywalker's lightsaber
2: Luke Skywalker himself, encased in carbonite.
3: The seeds of the Force tree from the Jedi Temple on Coruscant.
4: BBD2 itself, who is carrying the secret plans to Death Star III.

Sadly, the big green Lucasfilms logo screams “prequels” to us. (In 1977 “Lucasfilms” appeared in the same typescript as the rest of the credits.) But at least they are keeping any Disney branding at arms length. I don’t think I could have faced Star Wars with Tinker Bell's palace at the front.

I know that the Twentieth Century Fox fanfare was played at the beginning of dozens of other movies; but for me, that Fanfare signifies that I am about to watch Star Wars. I hope Disney have come to some arrangement and will be able to use the fanfare in the theme tune.

Stormtroopers being addressed by leader in military uniform. TIE-fighters (with white sails) on either side. Snowy mountains in the background.

One of the things that Lucas took over directly from Flash Gordon was the single-environmental worlds. A New Hope has a desert planet; Empire Strikes Back gives us an ice planet, a swamp planet and a cloud planet; Return of the Jedi adds a forest planet; Phantom Menace throws in a water planet and a city planet...and then everything gets a bit messy. Are there snowy mountains on the desert planet of Jakku? Or is there a Tatooine-analogue and a Hoth-analogue? Or is Abrams going to settle on a planet with more than one ecosystem?

Stormtrooper (Finn) taking his helmet off.

Finn’s voice: “I was raised to do one thing but I’ve got nothing to fight for”.

Finn is a stormtrooper; a disillusioned or turncoat stormtrooper. He gets separated from, or escapes from, the other troopers and takes up with Rey.

Return of the Jedi ends with Darth Vader removing his helmet; but we never see a stormtrooper’s face in the original trilogy. We do see clone trooper’s faces in Attack of the Clones and the Clone Wars cartoons: they all have the face of Jango Fett. We know from Rebels that stormtroopers are not clones.

Anyone who can see Finn looking out at the settlement and not think "I bet it is a wretched hive of scum and villainy" is not a true Star Wars fan.

Long shot of baddie — Kylo Renn — on bridge of spaceship.

The scene is overwhelmingly red: the colour of evil Jedi lightsabers. As in the poster, the colour seems to be consciously used here as a symbol of evil. In some of the shorter adverts the Imperial March plays over this sequence. We do not hear Vader's heavy breathing.

Kylo Renn addressing the burned out helmet of Darth Vader.

Kylo Renn touching another character, a stormtrooper, no-one we recognize, on the head, making him scream.

Renn: “Nothing will stand in our way. Nothing. I will finish what you started”.

The first close up of Renn forcefully reminds us how much like a gas mask Ralph Mcquarrie's original sketches for Darth Vader looked. The villain is almost praying to Vader, treating his helmet as a unholy relic: as if he does not know that he returned to the good side before he died.

Question: what did Darth Vader start? The only time he expresses a personal belief is when he says that he wants to destroy the Emperor, and "bring order to the galaxy". (Anakin talks about strong leadership in Attack of the Clones.) Does Renn want to rule the universe? Or is there a more specifically Dark Sided scheme that Vader started and he wants to finish. The destruction of all the good Jedi, for example? Does anyone know what the Sith were for...

We have been introduced to the two goodies, Rey and Finn, and the baddie, Kylo, without getting a glimpse of anything specific from the original movies. The helmet ties us back to the trilogy and then…

Whoosh! Fast montage of TIE fighters chasing the Millennium Falcon through wreakage of Star Destroyer. Three classic ships from the Trilogy in one scene!

Rey and Finn together, in some kind of rebel base. Han Solo, facing them.

Voice of Rey: There are stories of what happened.
Voice of Han Solo: It’s true. All of it. The Dark Side…The Jedi

In the first film, the point of Han Solo was that he was a relatively young guy who didn’t believe in the Jedi or the Force. It will be nice if in this one, he’s the old veteran who has to deal with the fact that none of the young dudes believe in the age of heroes.

X-Wings flying over a body of water.

Kylo Renn with followers in darkness and driving rain.

X-Wing pilot ducks under the wing of his ship, sees Finn, taps him lightly on the shoulder, and walks on; the camera spins around as if Finn is staring at him.

For some reason, this was the one moment in the trailer which induced a proper tingling of the spine. I suppose because X-Wings, even more than lightsabers, are the central icon of the first movie; because the whole trajectory of A New Hope is a journey from Tatooine to Yavin; because it somehow only fully becomes Star Wars in that last quarter, when Luke becomes a rebel pilot. And obviously, because what Andrew Rilstone, chief Jedi Knight of East Barnet school, really wanted was to go to Yavin and be given his own X-Wing.

Rey and Finn running from explosion.

Is this the big ziggurat which the rebels used as a base on Yavin?

I think that Abrams is deliberately using imagery which calls to mind scenes from Star Wars: I very much doubt if we will actually see Hoth, or Tatooine, or anywhere else familiar, in the movie.

Figure with metal hand reaching out to touch Artoo Deetoo.

Everyone assumes this is Luke, because they can’t think who else it can be.

Stormtroopers emerging from one of those three-winged Imperial shuttles, led by grand stormtrooper in cloak.

Beebee and Poe in an X-Wing: long shot of X-Wings and TIE fighters battling above an ice planet (the same mountains where we saw the stormtroopers assembling at the beginning?)

I am actually quite surprised that that implies that Han and Chewie are going to feature in an “action bit”. I’d wondered if General Solo might be limited to a minor cameo.

VOICE: The Force. It’s calling to you. Just let it in. 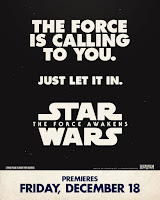 This is being used as a substitute for “May the Force be with you” on one of the “retro” posters. You’d think the Force would be calling to Finn; but the voice is the same one that was asking Rey who she was at the beginning of the trailer. Could it maybe be that Finn has a lightsaber, wants to be a Jedi, but that Rey is the one with the actual power?

This is the only look we get at Leia in the trailer. The implication is that something bad has happened. Someone has died. Someone has gone over to the Dark Side. One of the shorter spots has Accented Voice saying "Hope is not lost today" which you would only say if there had been a serious catastrophe.

The word Hope is specifically associated with Luke -- in the first film he is "a new hope" and in the second one he is "our last hope".

This is what we are meant to be left wanting more of. The title of the film is “the Force Awakens” after all. And Kylo Renn thinks there has been "an awakening".

So the big climax has to be a bad Jedi fighting a good Jedi, or at any rate, a good wannabee Jedi.

It took Luke two movies to go from being a farm boy to being able to have a go at facing Darth Vader: Kylo Renn must be a bit of a wuss if a stormtrooper can already stand up to him in part one of the trilogy.