It was in the last days of the second millennium. The gilt hadn’t quite rubbed off Tony Blair. The Dome hadn’t quite become a national joke. The only thing I knew about the World Trade Center was that King Kong had climbed up it.

It was the last time I felt properly excited about Star Wars.

Symbols are almost like letters of the alphabet. We know what they mean without consciously seeing them. But don’t assume. The other day a colleague asked me if the Jews had a Bible of their own. ("Is it called the First Testament or something?”) A thing that everybody knows can become a thing that nobody knows, overnight. There are people old enough to drink in pubs who have never heard of Bagpuss.

The die-hard fan sees a symbol: everyone else sees a picture.

They see sand. We see Tatooine.

They see a dome-like Tunisian house. We see Mos Eisley.

They say “hang on, is there some kind of exposure error, there seem to be two suns” we hear the binary sunset theme in our head.

They read “Episode One” in small letters: we see Star Wars Episode I, the moment that has been implicit since the first seconds of The Empire Strikes Back. The moment that many of us thought would never come.

Yes: we can say that the prequels were a colossal disappointment.

But we can also say that, in 1998, we went to the Bristol Odeon, very possibly to see Star Trek : Insurrection and were confronted by the Episode One teaser poster for the first time.

The long, thin version, on the big cardboard standee.

Back view of little boy in slightly Jedi-ish clothes, walking past Luke’s house, or Ben’s house, or just a house.

Shadow of Darth Vader cast behind him.

One word on the poster: “Episode One”.

My spine has never stopped tingling.

Nothing has ever looked as Star Warsy as the original posters. The strange, far-away ones with Luke holding his lightsaber above his head while Leia curls up at his feet; the beam throwing a cross across the poster. The montage one, painted by someone who’d seen the movie, with Luke firing directly out of the image, Leia shooting to the left, Han to the right, and Vader wielding his saber, splitting the poster into three.

The Force Awakens posters evoke, without quite quoting, those 70s images. A crowded montage is quite retro for a modern film: blockbusters nowadays prefer single motifs (like Captain America’s shield or Batman’s bat) or else a striking image from the movie itself.

There is no single character dominating the picture. The closest to the center is actually a small figure of Threepio, possibly because the droids are the viewpoint characters of the whole saga. If anything, the fascistic military parade of stormtroopers are the focus of the poster. There's a cluster of familiar faces -- Han, Leia, Chewie, and also a fella in an orange jump suit who we know to be Dameron Poe, but who rather functions as an iconic Luke Skywalker substitute in the poster.

The biggest figure is Kylo Renn. (The face of Darth Vader presided over both the 70s Star Wars posters.) He is looking to the left, wielding his big red lightsaber. Finn has his back to Renn, wielding his blue lightsaber to the right.

The whole poster is split into red and blue, the dark side and the light: a very striking motif that has not been used before. There are ranks of stormtroopers pointing in both directions. Could this possibly mean that there is a proper civil war, with the white-armoured fellows fighting on both sides? Curiously Rey is on the red side of the poster, her pointy stick at the same angle as Kylo's lightsaber. Could this signify that she will be tempted by, or go over to, the Dark Side? Or is there some other connection between them? Mind you, there are X-Wings in the "dark" section so it may just signify that the two lightsabers are lighting up the scene.

I like the X-Wings best. Whatever else goes wrong, the presence of those original space ships -- the real space ships -- will make me happy. I like the fact that we are looking at paintings, not stills. Painted X-Wings have a dynamism that models never quite manage.

One of the trailers seemed to have X-Wings skimming the surface of a big space ship. But most interestingly and not otherwise hinted at, in the background of this poster, large and threatening, is something which is quite clearly a Death Star. 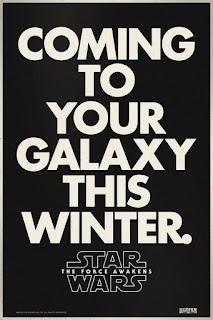 These are curious. Obviously, I want to love them, because they evoke the spirit of 1977. I don't think I saw them at the time; I don't think "Coming to your Galaxy this summer" was ever used in the UK. There was a slight whimsy to the advert; redolent of 2000AD costing 20p "earth money". We aren't sure how to market this thing; it's sci-fi, definitely, but it's not a classic space movie. ("A story of a boy, a girl, and a universe" was tried in the original cinema adverts.) "A Long time ago in a galaxy far far away..." has some of the same archness to it.

Some people have said that "galaxy" is code for "cinema". Not only is Star Wars coming to your "galaxy", but it is the kind of film you would have seen in a "galaxy" far far away when your dad was a kid and there was a newsreel with every movie. In which case the Star Wars comics are curiously tautological. "Beyond the movie. Beyond the movie house."

It was a nostalgic way of promoting a film in 1977. Now, it is meta-nostalgia, nostalgic for the nostalgia of punk and jubilee. Not many people even have grandparents who remember seeing Flash Gordon at the cinema; a few of those who were there when the credits rolled on Star Wars already have grand-children.

Do these posters declare their fidelity to the '70s vision of Star Wars? Or are they trying to usurp it -- from now on, this will be the movie you think of when you hear the 20th Century Fox trumpet blast?

No-one but us Star Wars fans will understand the joke. 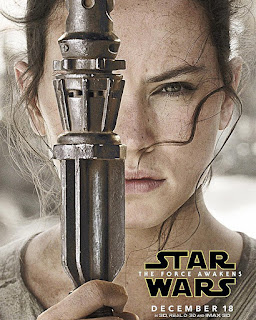 Rey's  poster is brown. She is slightly freckled. Her hair blows about in the wind. She is coded as wild, vulnerable, but determined. It isn't clear what she is holding. (From the trailers, we know that it is a pointy stick.) She has been hurt by the world. Stoical: a friend of heroes, rather than a hero herself? Androgynous: on the basis of this poster I might have thought she was a boy.

We do not know her surname. "Rey Solo" is a plausible sounding name. If Jedi are celibate, then it is hard to see where we would get a Rey Skywalker from. Assuming that Han the Leia got together after Return of the Jedi, she could be Darth Vader's grand-daughter. 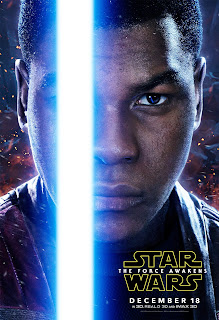 Finn's poster is black. Finn is unshaven and sweaty. He looks bemused rather than grim, as if he has fallen into a plot he doesn’t understand. The lightsaber blade is the only light in the picture. A blue blade, telling us that he is one of the good guys. A smooth blade, telling us that it was properly constructed. Perhaps it was given to him: perhaps it is Luke's lost weapon? Although he is a Stormtrooper, he is definitely not the clone of Jango Fette.

Are audiences sufficiently colour-blind that Finn could be Leia's son? Or is the whole point of the racial difference to make it clear that he has a different heritage? 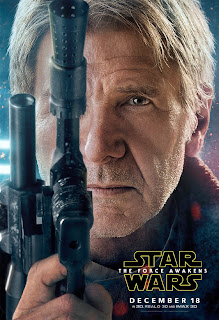 This poster isn’t about Han Solo. It is about his gun. I remember this gun. It is one of the few guns that appears consistently through the movie. Luke has a blaster (taken from a stormtrooper) but I can’t picture what it looked like. I can picture Han's gun. There was even a toy in the second or third wave of merchandising.

So Han in the new film will have the same gun as Han in the old film. Somewhere between a ray gun and a cowboy pistol.

This is Han from the original movies; the same guy, the same clothes, the same gun. But older. His face is unreadable. 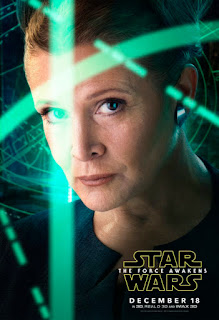 Leia is green and black. Everyone else's face is bisected by a weapon: she is surrounded by those see-through heads-up displays from Empire Strikes Back. A serious face, authoritative but with something hidden beneath it. Grim. There is none of the inventive glamour of the old films, and certainly no earmuffs. This woman has seen a lot and lost a lot.

The hardest poster to take: would I know this was the Princess if you had not told me? Leia was the single most important thing in Star Wars. I hope that this Leia will not be a relic, or a stuffed shirt. 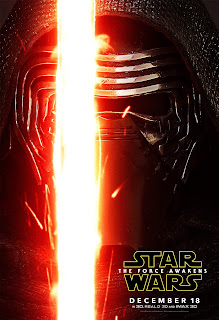 Kylo Renn is red and black. This tells us the least. We can hardly see that we are looking at a face. The original sketches of Vader made the mask look almost like a gas-mask: this seems a throwback to that. In the days before Phantom Menace, it was possible to believe that Darth Maul would be some kind of replacement for Darth Vader; he was actually barely more than a cameo. Abrams says that Renn is not a Sith: he has gone to the Dark Side and not taken the title Darth. His lightsaber is wobbly, jagged. Presumably he has made it himself, without Jedi training, and made it badly. 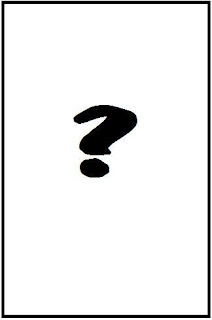 The absence of Luke is the most interesting thing about the movie until we see it. Once the reason is revealed, it will be something everybody knows, and has always known.