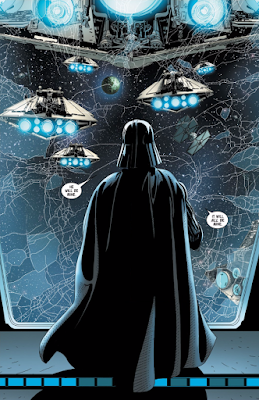 Darth Vader is standing on the bridge of a Star Destroyer, looking out into space.

Boba Fett enters from behind. “I lost him” he says.

"This is most disappointing" replies Vader.

One of the great things about Darth Vader is that, while he is in some ways the personification of anger, he always speaks in calm understatements: "I find your lack of faith disturbing"; "The Emperor is not as forgiving as I am"; "No. I am your father." Not everyone writing Darth Vader after the fact gets this right.

Vader has hired Fett to track down the boy who destroyed the Death Star. He thinks he encountered the same boy, armed with an oddly familiar lightsaber, on Cymoon 1. Fett has traced Luke to Tatooine, where Luke is trying to retrieve Jedi relics from Ben’s old home. Blinded by a flash grenade, Luke trusts to the Force (doubling all his attributes for one round) and manages to deflect Fett’s blaster fire with his lightsaber.

Vader asks if Boba Fett got anything at all of value. “Just his name” he replies. “Skywalker.”

This time, Vader doesn't speak at all. He just clenches his fists, and the Star Destroyer’s windows shatter. You can more or less imagine the heavy breathing sound effect and the Imperial March playing in the background.

Marvel's current Star Wars sub-imprint has a nice line in parallel plotting and intertwining narratives. Vader's discovery of Luke Skywalker identity occurs in issue #6 of Jason Aaron's Star Wars series; but the same scene is shown in #6 of Kieron Gillen's Darth Vader title. Gillen's version is somewhat decompressed: we are much more inside Vader's head. Between Boba's words and Vader's reaction are inter-cut a series of flashbacks — Amidala telling Anakin she is pregnant; the Emperor telling Vader that she is dead; her funeral; the Death Star Trench; Vader fighting Luke on Cymoon. A New Hope, Revenge of the Sith, and earlier issues of this comic are all equally canon, equally part of Darth Vader’s memories. It seems to fit together. Beneath the mask, Darth Vader is still Anakin Skywalker, with Anakin Skywalker's memories and Anakin Skywalker's feelings.

Ben wasn't even telling the truth when he said that Anakin Skywalker no longer existed.

In Kieron Gillen's version, he looks out through shattered glass. “I have a son. He will be mine. It will all be mine.” This doesn't work quite as well as "This is most disappointing". It's too ranty; too much the kind of thing a Marvel Comics Supervillain would say. ("Ha-ha. This is merely a temporary set-back. Soon the world will hear from me again.") In one of the Extended Universe novels, possibly Shadows of the Empire, Vader is seen using the Dark Side of the Force to completely heal his body so he can survive without the black armour. But he doesn't quite have the strength to do so; his love for Luke means he hasn't fully given himself over to the Dark Side. This struck me as pure Doctor Doom and not at all Darth Vader.

In A New Hope, Vader refers to Luke merely as "this one" -- an anonymous pilot who is somehow strong in the Force. By the beginning of Empire Strikes Back he is "obsessed with finding young Skywalker". We have all asked the question "what did the Dark Lord know, and when did the Dark Lord know it?" Aaron and Gillen provide an answer. Vader was completely unaware of Luke at the time of A New Hope (he could not sense his presence and it never occurred to him that anyone would hide his son on his own planet); he guessed the X-Wing pilot was someone important; he only found out what had happened when the bounty hunter discovered the pilot's name. It seems that although Uncle Owen hated the memory of Luke's father and Obi-Wan knew that secrecy was vital it never occurred to either of them to raise the orphan as Luke Lars.

And of course they made it up. Our of their heads.

It is possible for a scene, or a story, to be so well-imagined that that this doesn't matter. For a scene to achieve instant canonicity, not because a man with a mouse says so, but because we feel it can stand alongside Obi-Wan and Vader's duel, or Luke looking out at the binary sunset, or any other iconic moment. It's that level of iconic canonicity that The Force Awakens has to achieve if it is going to justify its existence.

Some texts force us to have faith in them by sheer force of imagination.