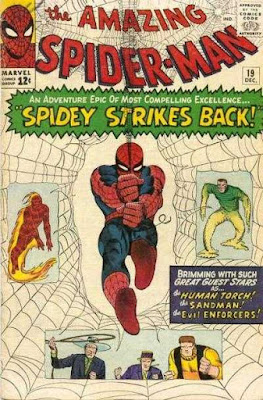 p6: “I couldn’t take a chance on ever having to eat someone else’s pancakes”
“Wheatcakes” are simply pancakes made with buckwheat flour, so these are presumably the same breakfast food that Peter Parker liked so much in Amazing Fantasy # 15.


p9 “All hail the Spider, a hardy breed is he”.
This sound like it should be a parody of a popular song, but I can’t work out what Stan has in mind: can anyone help?

p17 “You sure took your own sweet time about freeing me”
“Count your blessings, mister.”
These are both arguably references to hymns. (”Father, lead me day by day / ever in thy own sweet way” “Count your blessings, one by one.”) Perhaps part of the Spider-Man / Torch feud is a clash between their Jewish and Protestant heritages?

Peter Parker’s Financial Position:
Jameson thinks that the pictures of Spider-Man fighting the Enforcers are “sensational”; so he probably gets the same $2,000 he did for the pictures of the Vulture.

One of the wrongest things which has ever been said (by Andrew Garfield, among others) is that Spider-Man is a Christ figure.

The Jesus-story is about a divine being who condescends to come down to earth from heaven to be our Saviour. That’s why characters like the Silver Surfer and Adam Warlock and Superman (who have supernatural origins and come from the sky) find it so hard to avoid being Christ-like.

Spider-Man doesn’t descend from heaven; he pulls him self up from the earth. On webs. Which he made in his bedroom. His story is about an all-too-human Everyman who struggles to do what is right with the hand that life has dealt him. His situation isn’t fundamentally different from yours or mine. If it were, we wouldn’t be very interested in it.

Throughout 1963 and 1964 one of the key themes of the comic has been perseverance. Spider-Man gets knocked down, but he gets back up again. Up until now, this has largely consisted of Spider-Man being beaten by a baddie but coming back and beating the baddie on the second attempt. But it is now going to take a slightly new — and much more inward looking — form. From now on the formula is going to be:

The story is there in embryo in Spider-Man Annual #1, when Peter wishes his powers away; and it forms the moral center of the triptych. It will crop up over and over again for the rest of the comic's history (most notably in Spider-Man #50, which forms the basis for the second and best Spider-Man movie. )

And most versions of the story do indeed contain a de profundis moment.

Long before Joseph Campbell turned the whole thing into colossal bore, Northrop Frye (a proper literary critic, who was examined by C.S Lewis) had argued that heroic stories typically have a V shaped pattern of descent and ascent. This could be literal — a hero might go down and face an enemy in a cave, or a dungeon, or an undersea base, or a giant glass fish-bowl and then come up into the light. But it could also be metaphorical — a hero might descend to the depths of despair and then have his faith and confidence restored. That “V” movement of descent and ascent does have a structural resemblance to Christ’s Passion and Resurrection, even if the hero in question is very un-Christ-like indeed. Frye called these kinds of romances Secular Scriptures, although perhaps he would have been better off saying that the Gospels are sacred romances.

Many of Spider-Man’s greatest adventures clearly do have that “V” shaped structure. And many of his finest moments do take place at the nadir of the “V”. It’s when he doesn’t have any powers and faces Electro anyway that he is most like Spider-Man; it is when he has chucked his Spider-Costume in the dustbin that he realizes who he irreducibly is. The Sinister Six story has a moment when he very nearly calls out "my powers, my powers, why have you forsaken me?"

Spider-Man #19 is not as highly regarded as the other two stories in the triptych: but it is essential, and a marvelous comic in its own right. Together, the three parts show us the fall and rise of Spider-Man in beautiful slow motion. Amazing Spider-Man #17 showed us Spider-Man humiliating himself in front of the biggest audience possible; #18 showed us him at the very depths of despair; so issue #19 has to show us a truly confident Spidey bouncing back, and showing the Human Torch a thing or two.

Stan Lee’s claims about “non stop action” would normally presage an extended fight scene — but the truth is that this issue is more violent and kinetic than the comic has been in months. Ditko seems to be reveling in the Spider-Man-ness of Spider-Man. The character can too easily become merely a strong guy with a web-shooter-full of plot devices; but Ditko spends this issue thinking of new poses for Spider-Man to strike and new angles to look at him from. Instead of taking it for granted, we keep being surprised and delighted by the fact that Peter Parker can stick to walls. 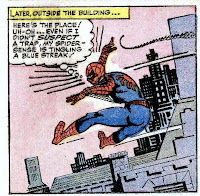 Look at pages 12 and 13: Spider-Man is in every panel, and every panel puts him in an imaginative pose: crouched on the wall outside Jameson’s office; hanging upside down to interrogate the hood; caught mid leap, letting go of a web at the apex of a swing and propelling himself forward, feet first. Panel 4 on page 13 has Spidey swinging straight at us: an iconic image that would be used over and over again both in the movies and the TV series. If you ever imagined that Spider-Man was just a hipper, younger version of Superman then you need to look at these pages, and see the uniqueness of the character. It’s all in the energy. There is a realism here that even Kirby would struggle to compete with. (An apparent realism, at any rate: a circus performer or a gymnast could tell us which of Spider-Man's maneuvers are physically possible.)

Look at the choreography of the fight against the Enforcers and the thugs on page 8: Spider-Man on the ceiling, on all fours. Spider-Man spotted by the Enforcers, now sticking to the ceiling with just his feet. Ox throwing Montana at Spider-Man, knocking him down. Spider-Man landing in a handstand position; three thugs running at him from different directions; Spider-Man springing up again so the thugs knock each other out. Granted, the “jumping away from two guys who are running at you” motif has been used before: and it probably works better in slapstick than an actual fight. But quite brilliantly, Montana catches Spider-Man in his lasso as he jumps — so Spider-Man escapes from one peril (the thugs) and into another (Montana) in a single frame. 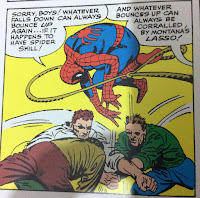 It would be an interesting exercise for an artist to redraw these twelve panels (pages 8 and 9) in a more contemporary, decompressed style. I suspect that it would be impossible. The action probably wouldn’t make realistic or cinematic sense: Ditko thinks in terms of individual frames, and the whole thing would break down if you had to work out where everyone is standing. (What happens to the bodies of the thugs Spider-Man knocks out?) An 11 panel fight in which slightly more is happening than you can easily keep track of is precisely what is necessary to to create the sense of exhilaration which Ditko is aiming at. It's the sensation of being released, the feeling that Spider-Man is now free and can do anything he likes…

Spider-Man’s dialogue reflects the pictures. It’s punchy, it’s funny, and it confirms that Spider-Man has embraced his identity and is having a good time. We sometimes criticize Stan Lee for being too wordy; we sometimes point out that dialogue which would take ten or fifteen seconds to speak is superimposed over a frame representing a fraction of a second of action. But it isn’t really possible to imagine a Spider-Man fight without a running commentary —

“Ha! I thought that would rattle ya a little!”
“You were right, meathead! It did rattle me..but just a little!”

Lee and Ditko are delivering on the promise made at the end of last issue. Spider-Man really has dropped the self-pity. He’s kind and funny with Aunt May ("what’s a pretty young girl doing here in my Aunt May’s kitchen?") relaxed with Flash Thompson ("I heard the whole routine before, I could recite it by heart!") and only mildly unpleasant to J.J.J. ("Sometimes, I suspect that man just doesn’t like me!"). Betty remarks that “he seems to have a new confidence in himself”.

As a story, though, there is not very much to it. The Sandman, who Spider-Man ran away from last issue, teams up with reliable division-two baddies the Enforcers to kidnap the Human Torch. They cleverly use asbestos rope to pull him down; chemical foam to douse his flame; before Sandman deposits him in a specially constructed glass jar – which lets in just enough air to keep Johnny alive, but not quite enough to let him 'Flame On'. (It would be interesting to know who constructed all this hardware — the Judo expert, the Big Strong Guy, the Rope Trick Guy, or the Habitual Thug Who Never Finished High School?) But of course, Spider-Man comes along and rescues the Torch — which is a kind of pay-back for all the times he's been upstaged by him.

Perhaps the highlight of the whole comic — of the whole trilogy — is Jameson falling on his arse one more time. He spent the whole of last issue with a terrible grin on his face, telling Betty to forgive Peter for apparently two-timing him, and telling his “loyal employees” they were welcome to ask their “tender-hearted employer” for help and advice. He hears that Spider-Man is back in action just before he is supposed to give a lecture entitled “How I proved that Spider-Man is a cowardly fraud.” The three-frame sequence in which the smile falls from his face — eyes drooping, frown lines appearing — is a little masterpiece. (It also reminds us that olden days arts could do decompression if they wanted to.) When we next see Jonah, he’s wondering if he’s “too old to join the foreign legion.” 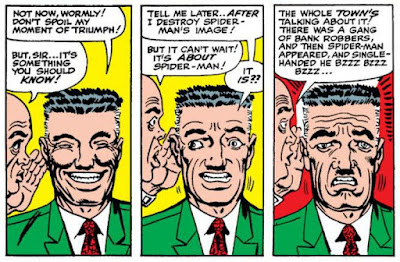 In January 1964, Spider-Man threw away his glasses and punched Flash Thompson. The Return of the Green Goblin, The End of Spider-Man and Spidey Strikes Back bring the year to a triumphant end. They tell us the tale of a hero who loses his confidence, regains his confidence and bounces back just about as well as it could be told.

But we are left with a dangling question.

Has whiny Pete really quit the stage for good? Is this new, self-confident Peter going to be who the comic is about from now on?

Or will we have to go through the whole thing again this time next year?

"Perhaps part of the Spider-Man / Torch feud is a clash between their Jewish and Protestant heritages?"

You earned a good, solid grin with this observation. (i and a friend or two uses GSG as a more honest alternative to LOL.)